Amanda Palmer and Rhiannon Giddens have joined forces for a moving musical collaboration this month. The cover of Portishead's much adored It's A Fire was recorded from several continents enduring lockdown in the midst of one of the most turbulent times the world has ever seen.

Half a world away from her home in New York, Palmer finds herself presently in regional New Zealand where her There Will Be No Intermission world tour concluded in March. The decision to stay put as the world quickly closed international borders proved to be an inconceivably fortuitous one.

"I was craving comfort during lockdown, listening to Portishead’s “Dummy” over and over again in the kitchen of our AirBnB, where I’d wound up an accidental single mother. Bent over a pile of dirty dishes in the sink one day, after receiving a long series of texts from my desperately sad friends in New York...I stopped in my tracks..."

'Cause this life is a farce

I can't breathe through this mask

LISTEN TO AMANDA PALMER + RHIANNON GIDDENS' 'It's A Fire' HERE:

Palmer explains, "There is something about this song that speaks to a deeper connection between things happening right now. Black Lives Mattering, COVID, fear and trust are all colliding with one another... I wanted this cover version to sound more like a dark closet talk between two friends...hanging onto each other for dear life whispering, "we're gonna make it out of here."

Palmer contacted longtime collaborator Jherek Bischof, himself locked down in Los Angeles, and asked him to arrange the song for "our times". He got on the job, and hired local string players in LA who would all play in isolation from one another.

Grammy winner and MacArthur 'Genius Grant' recipient Rhiannon Giddens had also just finished her own Australian tour in March in support of her 2019 release there is no Other, when she was locked down in Ireland. The prolific and intensely productive artist (Giddens has acted in two seasons of TV series Nashville, has written an opera that will debut next year, is a six time Grammy nominee and has been described by Pitchfork as "so fearless and so ravenous") was also craving collaboration. "It was a delight to work on this with Amanda Palmer... Felt so good to make some art together, even separated by half a world", says Giddens. "We all need to take a collective breath together, and breathe on...it's all of us or none of us".

Finally, Palmer tracked down a French illustrator residing in Melbourne to help design the single artwork. Jessica Coppet's mesmerising realistic scribble portraits bring to life her philosophical commitment to female empowerment and they had long ago captured Palmer's attention via Instagram. "Facial Expression and Anatomy have become a focal point for my art...Amanda wanted to portray two women supporting each other along with vintage and retro aspects to represent the inspiration for the song", Coppet adds.

All profits from this collaboration are going to go to the Free Black University Fund, a hub for radical and transformative knowledge production.

Melz Owusu of the Free Black University team says: “We are overjoyed at the generosity of Amanda and Rhiannon in choosing our project to give proceeds from this beautiful song to. The donation will go so far in us building a sustainable programme of radical education that aims to transform the world.” 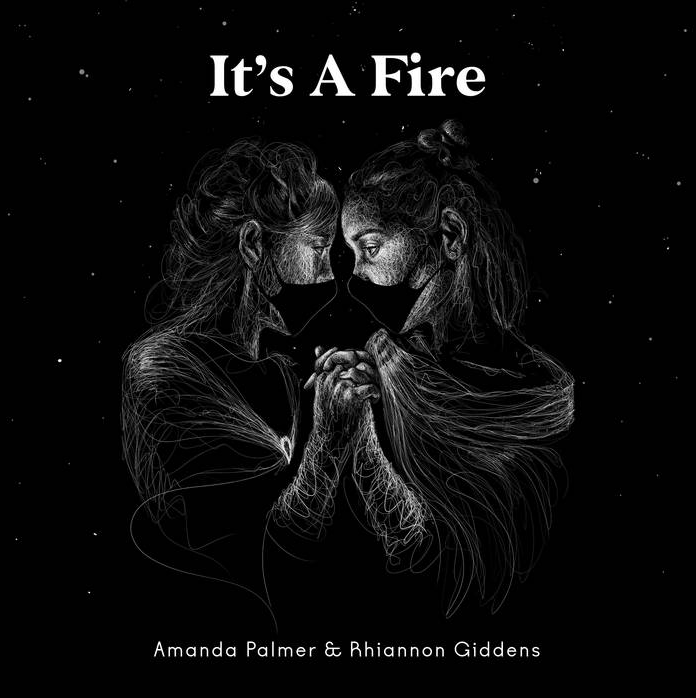 Violins and Violas recorded by Marta Sofia Honer at home

Mixed and Mastered by Jherek Bischoff at Sweethaven