Award-winning live music venue, bowling alley, restaurant, and nightlife space Brooklyn Bowl has announced the opening of a new branch in Nashville. The Music City location of the world-famous club franchise, the third following successful clubs in NYC and Las Vegas, will open its doors to the public on March 14. Located in a scenic part of Germantown surrounded by Victorian manors and beside First Tennessee Park, the iconic franchise’s Nashville base is setting its sights on becoming Music City’s premier live music venue and new home for Rock and Roll, complete with a LEED certified Bowling Alley and food courtesy of the Blue Ribbon restaurant group.

The 1,200 capacity venue is kicking it into high gear for its initial 40-show lineup, featuring a broad range of globally-recognized acts ranging from Angel Olsen to The Revivalists; PJ Morton to Royal Blood; Larkin Poe to St. Paul and The Broken Bones, The String Cheese Incident and many, many more.

"Nashville is a place that evokes the spirit of what was happening in Brooklyn when we opened there almost 11 years ago, and there’s so much great music,” says Brooklyn Bowl co-founder Peter Shapiro. “We’re really excited to bring our own vibe and energy to a place with so much history.”

“Combining what Nashville is famous for with the diverse and eclectic musical genres that we’ve become known for showcasing, we’re looking forward to being a new home for Rock. And Roll. in Music City.” adds co-founder Charley Ryan. “It’s a town with such amazing venues, and we’re excited and honored to be a part of the community.”

The flagship venue in Brooklyn was previously ranked the No. 1 Busiest Club in New York City and nominated for Nightclub of the Year at the 30th Annual Pollstar Awards, and the Las Vegas establishment has been voted Reader's Choice “Best Music Venue”the last four years in a row for Las Vegas Weekly's annual “Best of Vegas” awards. After many years of planning, the opening of Brooklyn Bowl Nashville, which happens in the original venue’s 11th year, is a labor of love for one of the fastest-growing and most-beloved nightlife club chains in the nation.

Brooklyn Bowl Nashville is a partnership between between Brooklyn Bowl and Live Nation. Tickets for the initial 2020 shows go on sale Friday, December 20 at 12PM CT. Due to the demand of the initial run of shows, a pre-sale will take place Thurs., Dec. 19 from 10 AM CT - 10 PM CT. Get your unique code HERE.

Fri., May 9 I Phosphorescent

Brooklyn Bowl Nashville is the ultimate night out. With its groundbreaking integration of premiere music, 19 lanes of bowling, a bar featuring locally crafted beers, food by the acclaimed Blue Ribbon restaurant group, and a patio overlooking First Tennessee Park, the 1,200 capacity venue is surrounded by elegant Victorian buildings in Germantown, located at the corner of 3rd Ave and Jackson St. The venue is slated to open 2020 Q1 and will be Brooklyn Bowl’s third location outside of its flagship in the Williamsburg section of Brooklyn.

Wearing its homegrown values on its sleeve, Brooklyn Bowl is committed to locally made products, environment sustainability, and boasts an unprecedented combination of top-flight music, bowling, beer, and food. 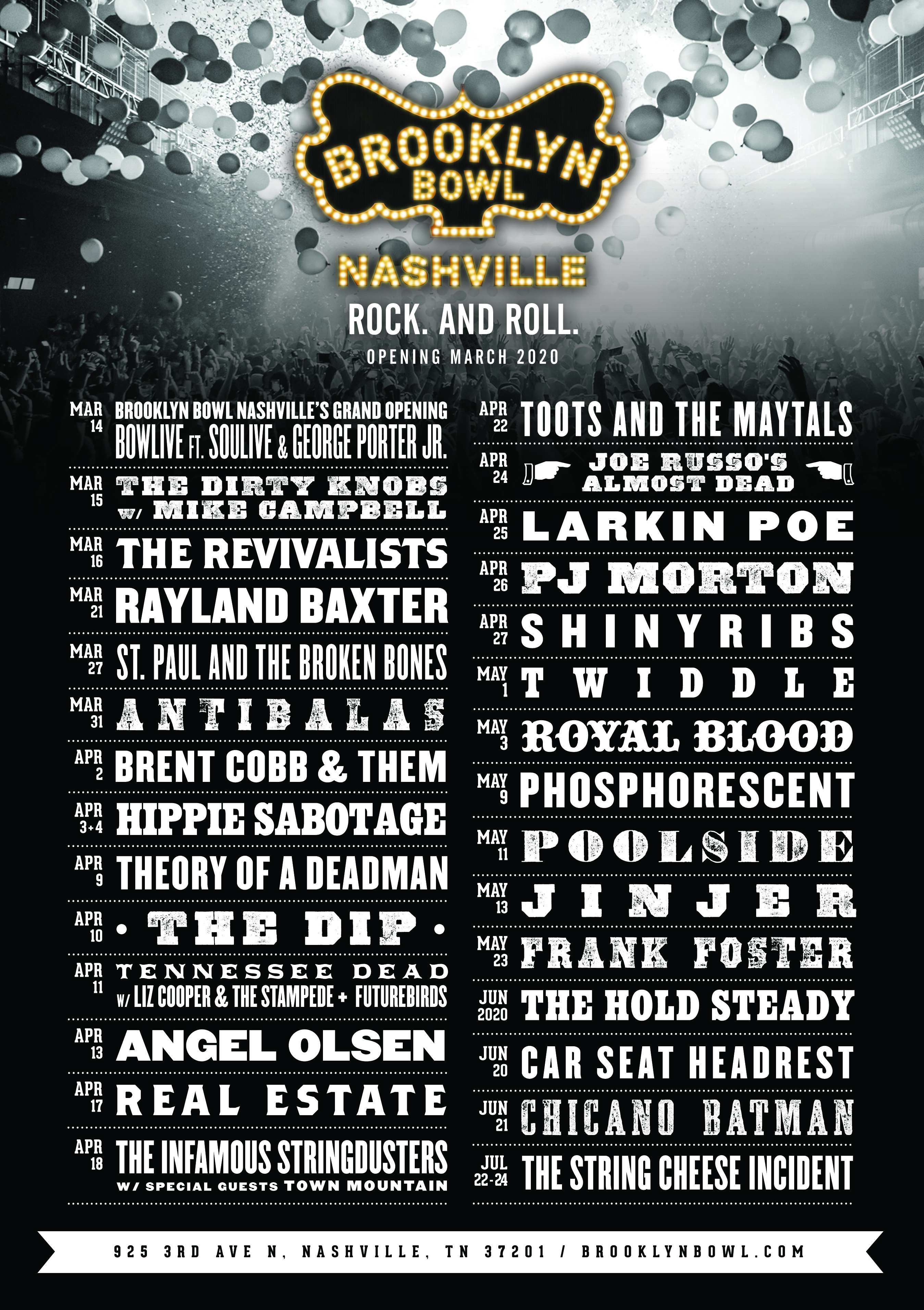