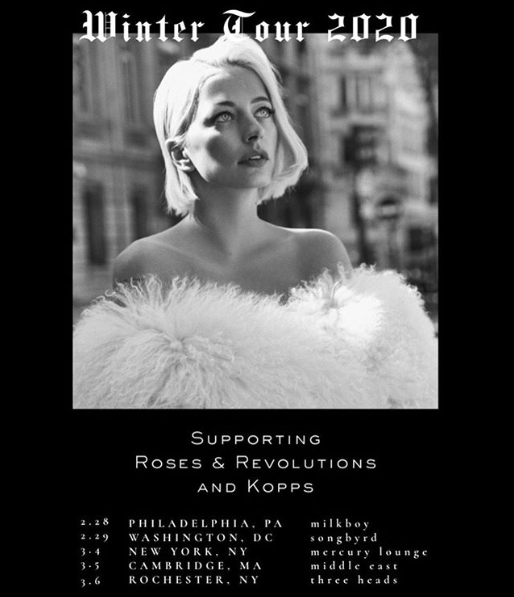 (New York, NY): Indie pop darling and fashion muse Caroline Vreeland announces her debut winter tour across the East Coast promoting debut album ‘Notes on Sex and Wine.’ She will support indie pop bands Roses & Revolution and KOPPS on the road, with the tour kicking off on February 28th at Milkboy in Philadelphia. The tour will also see the “glamorous and nonchalant” (SSENSE) chanteuse taking the stage at legendary New York City rock venue Mercury Lounge.

Set to preview cuts from her debut record due out in 2020, Vreeland is kicking her music career into high gear following celebrated performances at The Box in SoHo where Caroline promoted her new line of lingerie with Kiki de Montparnasse and at the Coveteur Flagship for a showcase with Agent Provocateur. This announcement caps off a fiery start to Vreeland’s musical rebrand, and sets the tone for the budding singer who flew for so long under the radar to come into her own as a musician in 2020.

Watch the video for “Stay Drunk With Me” via Billboard: https://www.billboard.com/articles/columns/pop/8541751/caroline-vreeland-stay-drunk-with-me-video

Caroline Vreeland’s forthcoming debut record ‘Notes on Sex and Wine’ is an invitation into bacchanalia from the mind of one of our generation’s last true jet-setters. Vreeland proves she has a true sense of pleasure and a sharp musician’s ear on an enviable debut that veers between spell-binding pop juggernauts (“Madonna Whore”, “Love Is Here”) to more subdued moments of sensuality with rock and jazz elements (“Stay Drunk With Me”, “Broken In”). ‘Notes on Sex and Wine’ is a declaration of independence written after the end of a two-year relationship, the diamond-encrusted confessional of a bicoastal party girl with a classic novel in one hand and a glass of red wine in the other, and proof positive that this diva is an artist with range and a style all her own. The record sees the emerging singer-songwriter carving out a place for herself as something more versatile than a prominent haute couture muse.

Splitting her time between Los Angeles and New York City, Caroline Vreeland found success embracing the fashion world she was born into as the great-granddaughter of emblematic Vogue editor Diana Vreeland, making a name for herself as one to watch. In the hyper-curated Instagram age, Caroline Vreeland has carved a niche out for herself as blunt, unapologetic, and chic both in her music and self-expression. Gracing countless magazine covers, Caroline Vreeland’s music has been praised by Interview, W Magazine, Harper’s Bazaar, The New York Post, Ocean Drive Magazine, and others. ‘Notes on Sex and Wine’ is her unapologetic, unrestrained first official release and sees the budding chanteuse, fashion icon, and femme fatale channeling Patsy Cline, Nancy Sinatra, and Amy Winehouse.

“glamourous and nonchalant at once” — SSENSE