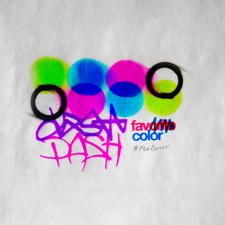 Today, contradash releases his new single “favorite color,” a bright and propulsive track anchored by a sugary-sweet earworm hook. “favorite color” is the latest in a series of singles released by contradash for Interscope Records in 2020, following previous releases “white lie,” “petal pickin’” and “cat out the bag.”

PAPER Magazine called “favorite color” “breezy,” dubbing ‘ALL-STAR’ “an assemblage of potent emo-pop heavy hitters.” contradash spoke to PAPER about his ‘ALL-STAR’ EP, 5th grade sports, and lockdown. “It's a blessing to not tackle the real life aspect of this yet,” says contradash, who has spent most of 2020 writing and making music. “This is just beyond extra credit. I couldn't be in a bad mood if I tried.” Read contradash’s full interview with PAPER Magazine here.

“‘favorite color’ is a play on the color red being a girl’s favorite color. I described leaving someone on ‘read,’ who’s favorite color is ‘red,’ as leaving them on their favorite color,” says contradash. “On an unrelated note, I really was wondering how long it’d take people to find me if I had randomly buried myself somewhere. That's what the pre-hook is saying. Looking back this really makes me realize how scatter-brained I am when coming up with song ideas. But it’s all fun regardless and I really love this one."

“Raw and emphatic…[creating] his own unique lane in an oversaturated music industry. - FLAUNT

“contradash has a way with breezy vibes and cool technology that makes him a contender to rule over America’s playlists.” - AltPress