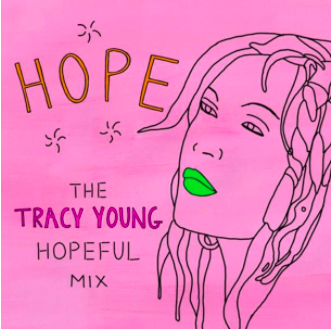 With one month to go until the monumental high-stakes U.S. election, Cyndi Lauper has enlisted GRAMMY-winning producer/remixer Tracy Young to create an amped up version of “Hope.”

“There is so much going on right now - from the Coronavirus, to the perpetual mistreatment of our Black and Brown brothers and sisters, to the abhorrent targeting of our LGBTQ community, to the divisiveness that’s happening in this country. No matter what side of the aisle you’re on - in the U.S. or around the globe - we're all human beings and I believe we all want the same things - unity and peace,” said Lauper. “We have to remain hopeful that things will get better. That’s why we march, we speak out, we fight for each other’s rights, and it’s why we vote.”

This thumping take on Lauper’s “Hope” single from 2019 was created by Tracy Young, who made history in January when she became the first woman to win a GRAMMY Award for Best Remixed Recording.

Lauper and Young have previously worked together, on this searing remix of “Shine.”  The “Hopeful Remix” arrives with a video created by the talented young London-based animator Harifa, who has previously collaborated with Lauper, Ciara and more. The ultimate take-away? “Don’t give up.”

“One of the things that I love about this project is that it really spans generations,” said Lauper. “You have three strong, creative women – me, Tracy, and Harifa – coming together to make magic.”

Lauper continues to reinforce her status as a role model, advocate and icon. Tik Tok is collaborating with Lauper and True Colors United on the #ShowYourTrueColors campaign for “National Coming Out Day” (October 11). In addition, Sony Music’s Legacy Recordings has commissioned a beautiful new lyric video for “Time After Time,” by Malikah Holder, also to premiere in time for National Coming Out Day.

Lauper is performing “Time After Time” on the PBS Great Performances: Salute To Grammy Legends concert that will air October 16, and was recently a part of the TIME100 and their broadcast on ABC last week, honoring her friend and collaborator Billy Porter.  She also doubled down on her fervent advocacy for the LGBTQ+ community via her True Colors United organization in this Op-Ed for the LA Times. Co-authored with former Secretaries of Housing and Urban Development Julian Castro and Shaun Donovan, the piece calls out the Trump administration’s transgender discrimination.

In addition, Lauper has been very active during the 2020 election season, performing at and participating a number of high-profile virtual events for #TeamBiden and Speaker Pelosi. She’s also enjoyed being a part of Richard Weitz’s pandemic Quarantunes parties, raising money for Broadway Cares and others.

Lauper also has a key role in Rise Up: Songs of The Women’s Movement, a documentary that has been airing on PBS throughout the year.  She duetted virtually with Irma Thomas for CBS’s Grammy Salute to Unsung Heroes special tribute to healthcare workers in May, and continues to work on projects including the Working Girl musical coming to Broadway and a Netflix show with Jane Lynch and Carol Leifer.  Her original songs were featured in Apple TV’s animated musical comedy series Central Park, she appeared as a character in Nickelodeon's Bubble Guppies, and has new music in the upcoming new Spongebob movie.