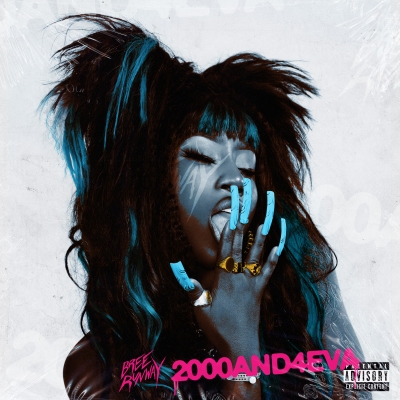 '2000AND4EVA' is the mixtape masterpiece from East London’s most vibrant trailblazer, Bree Runway. No stranger to delivering a fearlessly majestic project, '2000AND4EVA' represents a new generation of ‘the Black female in pop’ revolutionizing what it means to break barriers. Using her platform and voice to speak on subjects like colorism, visibility and the inaccuracy of categorizing Black women in music genres, Bree is making it her mission to change the narrative.

Describing a world that contrasts the many imperfect realities of life, relationships and heartbreak, '2000AND4EVA' draws on Bree’s own observations and stays true to her artistry and own strand of "destructive pop." Lead single, the catchy and exhilarating, "ATM" features her most-treasured idol, Missy Elliott. In the space of six months, Bree’s friendship with the undisputed queen of Afrofuturistic hip-hop has gone from being shouted out on Twitter to having her jump on a track. Having Missy step off a collaboration with Dua Lipa onto teaming up with Hackney’s rising powerhouse is a massive win and a testament to Bree’s global superstardom potential and follows previous collaborations with both Maliibu Mitch and Yung Baby Tate. Maryland native, Rico Nasty also features on an exclusive remixed version of previous single, "Little Nokia" - the two pop-rap rebels join forces on one of the most menacing collaborations of the year.

“I’m so excited to put this mixtape out," says Bree. "Every track is a different girl but all are SO Bree at the same time. I went through so many emotions creating this tape, from trying to create my fly girl music feeling so not fly in my pajamas and stuck in my same old four walls during lockdown to losing a friend and her child in the midst of it all. This year hasn’t been the easiest to take myself to a place mentally where I can feel good to create songs to make others feel good. But constantly fighting for inner peace and creativity daily, I’m glad I was able to put together a body of work for fans to press play on and feel like a rockstar with no problems for a second.”

Co-writing all eight tracks with ignited support from some of music’s most gifted producers like Moon Willis, LIOHN, Finn Keane and more, the nine-track mixtape is 17 minutes of 00’s bad bitch pop anthems and vibes. Alongside the four singles "APESHIT," "DAMN DANIEL," "GUCCI" and "LITTLE NOKIA," the tape features four brand new tracks including new single "ATM." Other new tracks include "ROLLS ROYCE," which comforts you with the warmth of reggae beats, while "NO SIR (FREESTYLE)" leaves you bopping and wanting more. Bree’s heartfelt and emotional tribute to the late dancer and friend, "4 NICOLE THEA AND BABY REIGN" shows a softer and more vulnerable side, inviting those listening to feel the pain and sentiment behind the loss of a loved one.

Bree Runway stands undeniably solid as an artist, unapologetic in her approach and rewriting the rules on her terms. She's a modern Renaissance woman that’s kept us entertained during lockdown using her DIY ethos and creative vision and has become one of the breakout stars of the year. With elevated support from some of the world’s biggest music stars, this pop phenomenon continues to forge her own path and looks set to be a huge One to Watch for 2021!

LISTEN TO THE MIXTAPE HERE

“Hackney’s pop-rap newcomer is blazing a trail”— The Guardian

“One of Britain’s most versatile – and explosive – young artists”— NME

“a renegade without restraint”— DIY

“Blending from pop to rap, it’s sensory overload– that’s the sound and the power of Bree Runway” – Dazed

BREE RUNWAY ON THE WEB: