New dates on-sale Friday, 9/10, at 10am local time – all other dates on sale now at evanescence.com and halestormrocks.com 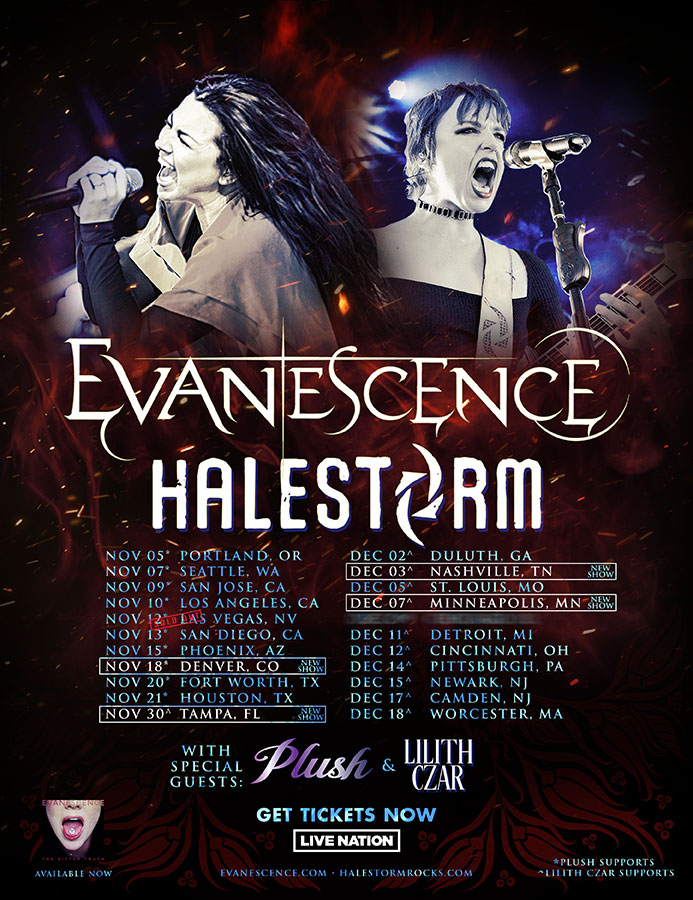 Evanescence and Halestorm are currently preparing to kick off one of the biggest arena tours of the year and have just added additional dates in Denver, Tampa, Nashville, and Minneapolis. The tour, which kicks off November 5th in Portland, Oregon, is slated to be one of the biggest female-fronted tours in years.

The four new dates will go on-sale this Friday, September 10, at 10am local time at evanescence.com and halestormrocks.com. Limited VIP packages will be available for purchase that include premium seating, access to attend Evanescence’s Soundcheck followed by a moderated Q&A with the band, exclusive merchandise items, and more.

The tour was recently featured on the cover of Pollstar, where Amy Lee and Lzzy Hale talked about the selling power of women in rock, their connection, and their plans for playing to fans live for the first time since COVID-19 hit. Read more here: https://www.pollstar.com/article/amy-lee-and-lzzy-hale-promise-a-thunderous-and-joyous-arena-co-bill-148536

Earlier in 2021, Evanescence released The Bitter Truth, their first album in 10 years, which the LA Times called their “fiercest songs to date.” Current single “Better Without You” is their first Top 10 Rock Radio track in ten years, and previous single “Use My Voice” is currently nominated for “Best Rock” at the MTV Video Music Awards. It’s the second year in a row that Evanescence has scored a Best Rock nomination, as well as the second year in a row that they are the sole female-fronted act nominated in the category.

Watch the video for “Better Without You” here: https://www.youtube.com/watch?v=hgRClfCU1ZE

Last month, Halestorm released “Back From The Dead,” their first new music since 2018’s Vicious. Called a “biting but cathartic howler” by Rolling Stone, the song quickly achieved the most first week streams to date for the band and debuted at #5 on Billboard’s “Hard Rock Digital Song Sales.” “'Back From The Dead is pure, full-throttle hard-rock – with a mandate-from-the-gods riff, wall-shaking drums and a climactic electric guitar solo from Joe Hottinger,” praised Guitar World. The video for the song, which surpassed a million views a week after its premiere, is here: https://youtu.be/srT0pgC_yto.

Grammy-Award winning band Halestorm has grown from a childhood dream of siblings Lzzy and Arejay Hale into one of the most celebrated rock bands of the last two decades. Currently at work on their follow-up to 2018’s Vicious, Halestorm’s music has surpassed a billion streams worldwide. Called a “muscular, adventurous, and especially relevant rock record” by Rolling Stone, Vicious earned the band their second Grammy nomination, for Best Hard Rock Performance for the song “Uncomfortable,” the band’s fourth #1 at rock radio, and led Loudwire to name Halestorm “Rock Artist of the Decade” in 2019. Fronted by the incomparable Lzzy Hale with drummer Arejay Hale, guitarist Joe Hottinger, and bass player Josh Smith, Halestorm has earned a reputation as a powerful live music force, headlining sold-out shows and topping festival bills around the world, and sharing the stage with icons including Heaven & Hell, Alice Cooper, and Joan Jett.