Press ReleasesEvanescence Partners with Incendium and Sweet to Debut...All Releases 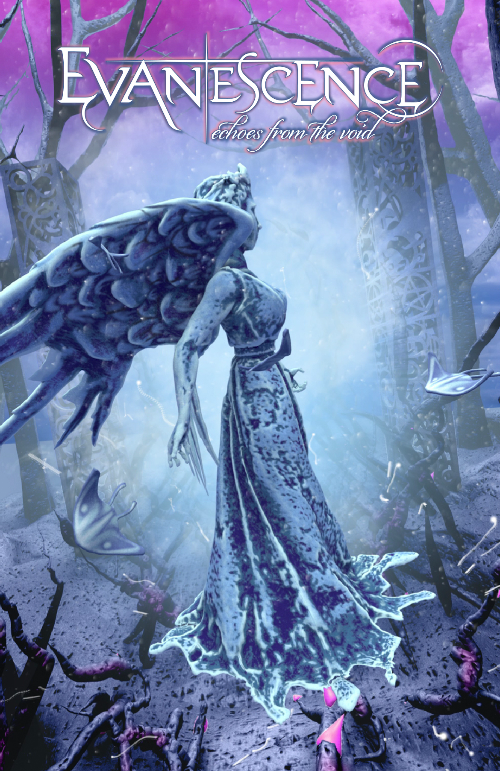 LOS ANGELES (September 29, 2021) -- GRAMMY® Award-winning band Evanescence, production company Incendium, and NFT platform Sweet are thrilled to announce a collaboration on a new line of NFT collectibles inspired by the first issue of Evanescence's Echoes From The Void graphic anthology series, which sold out in its first printing, published by Incendium as part of their OPUS line of books. Today (Wednesday, September 29th) at 9am PST, Sweet will launch the Evanescence Echoes From The Void drop on sweet.io, which will include 4 NFTs available to purchase, including 2 collectors cards, a virtual souvenir coin, and an auction of a one-of-a-kind 3D interactive sculpture. This marks the first-ever NFT project for both Evanescence and Incendium, with additional drops planned near in the future. While this initial NFT line is inspired by issue #1, future drops will expand on the artwork and creations in upcoming issues of Evanescence's 5-issue fantasy graphic anthology series.

"It's been awesome to see the art and stories of Echoes From The Void evolve into the digital space. The series is becoming a showcase with so many talents adapting visions from songs in our discography," said Evanescence's Amy Lee. "Diving into the world of digital collectibles lets us add a new dimension to the characters and storylines that we've loved creating. I can't wait to see what more we can do as the rest of Echoes From The Void unfurls!"

The two NFT virtual collectors cards from Echoes From The Void will feature the main and variant cover artwork from issue #1, created by Hugo Award-winning artist Abigail Larson and esteemed painter Kelly McKernan, brought to life through a combination of 3D design and 2D animation. In addition to the cards, a virtual souvenir coin featuring an illustration of Amy Lee will be available for purchase. Sweet will also host an auction of a single interactive 3D sculpture NFT of the winged Stone Princess from Echoes From The Void #1. Fans can visit sweet.io to learn more about the drop and to access Sweet's blockchain wallet to purchase the Evanescence Echoes From The Void NFTs using a credit card, Apple Pay, Google Pay, or cryptocurrency through Coinbase Commerce, starting on September 29th. The 1 of 1 auctioned NFT will be delivered to the wallet of the buyer's choice, and fixed price NFTs will be delivered to Sweet's blockchain wallet with the ability to transfer to another wallet as desired. Prices will vary per NFT.

"Incendium has always been rooted in collectibles, be it comic books, figurines, or pin badges. We're delighted to be partnering with Sweet to expand our offering in the digital space, and to collaborate with our in-house 2D, 3D, and animation talent to create new and exciting designs for digital collectibles," said Llexi Leon, CEO of Incendium. "What better way to launch our NFT line than with Evanescence and Echoes From The Void, one of our most ambitious art and narrative projects that has spawned incredible imagery across comic books, art prints, and more. For those that missed out on the physical first printing of issue #1, these digital collectibles will be a great way for fans to get in on the ground floor and collect the series art. We can't wait to launch our first of many exclusive drops."

Echoes From The Void #1 is the debut issue in Evanescence's fantasy graphic anthology series, featuring two stories based on the songs "Better Without You" and "Wasted On You" from the 2021 album The Bitter Truth. Issue #1 highlights tales written by Carrie Lee South and Blake Northcott (Arena Mode saga, DC's Catwoman) and illustrations from Abigail Larson and Kelly McKernan. Fans can now purchase the limited edition second printing of Echoes From The Void #1, featuring a variant cover by Kelly McKernan, on Incendium's site HERE. Upcoming issues in the anthology series will explore additional song themes from The Bitter Truth and revisit iconic material from throughout the band's career, with short stories created by an all-star line up of writers and artists, with additional details to be announced soon.

Sweet has created a highly-scalable NFT platform that enables IP holders and brand partners such as the New York Knicks, Chicago Blackhawks, and Dave & Buster's to deploy integrated and gamified NFT solutions through interactive consumer experiences and branded marketplaces. Sweet's user-friendly NFT wallet takes the crypto-complexities out of buying, collecting, and trading digital collectibles. Its blockchain agnostic platform allows Sweet's enterprise clients to create holistic, long-term NFT strategies that attract both crypto enthusiasts, as well as everyday fans. Sweet has chosen to launch the first stage of Evanescence's NFT experience on the Polygon blockchain, an interoperable scaling solution for Ethereum that consumes a fraction of the electricity of other blockchains while handling large volumes of tokens. Polygon follows Proof of Stake methodology to leverage transaction speeds and to be eco-conscious. To learn more, visit sweet.io.

"We are very excited to partner with the innovative thinkers at Incendium on this first rollout with Evanescence. The creative designs of these NFTs are exceptional and offer Evanescence fans and collectors alike the opportunity to own verifiably unique and authentic digital works inspired by the Echoes From The Void graphic anthology series," said Tom Mizzone, Sweet's CEO.

This marks Incendium's first venture into the world of NFTs, with plans to do additional digital collectibles on a monthly basis that are inspired by other stories in their OPUS line of music-focused comic books. Other high-profile projects under OPUS include Disturbed's Dark Messiah comic book series, Joe Satriani's Crystal Planet series, Black Veil Brides' The Phantom Tomorrow series, Exodus' Tales of the Damned series, Cradle of Filth's Maledictus Athenaeum series, Helloween's Seekers of the Seven Keys series, and more. Incendium is also releasing collectible action figures for purchase that represent iconic characters from the musical lore of each band and from the comic book storylines from each series.

New York-based Sweet is a highly scalable, consumer-friendly, and environmentally conscious Non-Fungible Token (NFT) platform used by over 600 top consumer and entertainment brands worldwide, including Dave & Busters and the New York Knicks. As one of the world's only blockchain-agnostic models, Sweet enables enterprise brands to create digital collectibles on multiple compatible blockchains best suited for each customer's specific needs. Sweet offers the flexibility of broad-scale creation and distribution of NFTs, driving both revenue and consumer engagement for brands. Founded in 2017 by an experienced technology leadership team, Sweet has built one of the most energy efficient NFT platforms in the world and can quickly spin up creative distribution campaigns for clients leveraging the blockchain. For more information about Sweet, visit sweet.io.

Founded in 2006, Incendium is a multi-faceted production company known for an array of animation, comic books, toys, and video games. Driven by our team's passion for Myths, Monsters, and Metal the brand embraces 80s and 90s counterculture with a contemporary twist.