AN EVENING OF CONVERSATION ABOUT THE FUTURE OF JAPANESE HIP-HOP TAKES PLACE ON TUESDAY, MARCH 23RD AT 7 PM ET VIA ZOOM 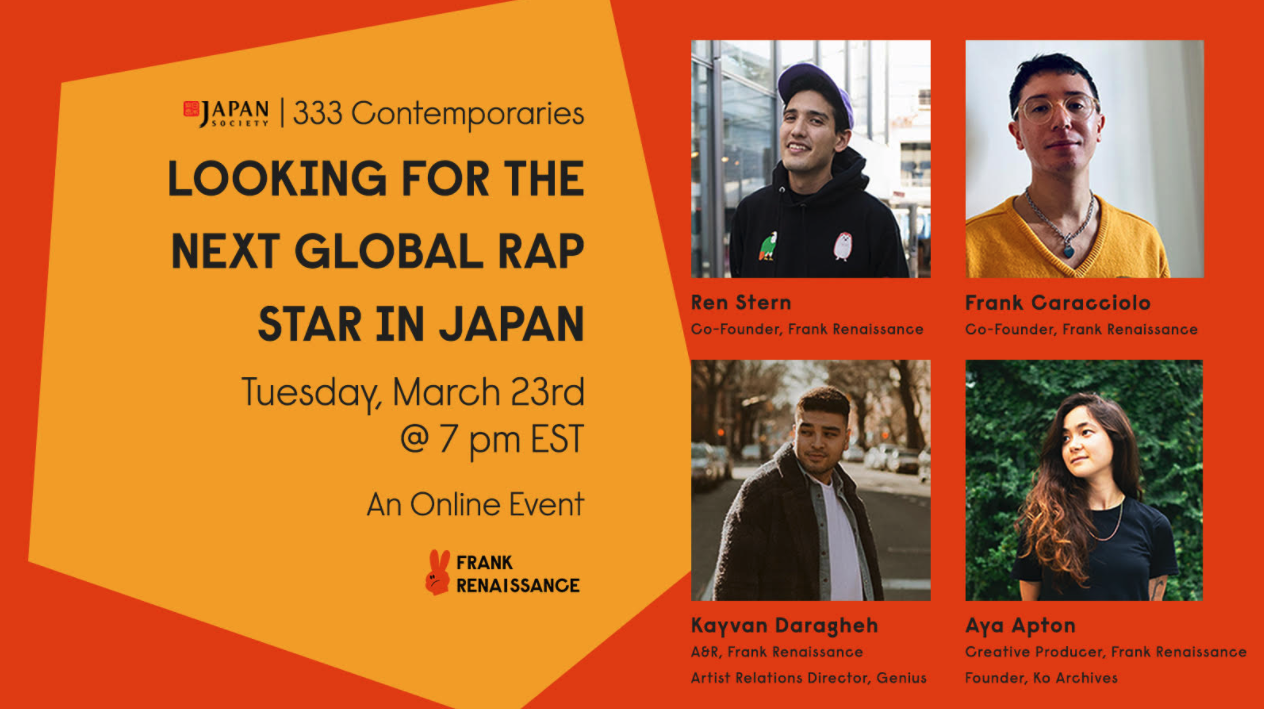 Japanese-American record label and production studio Frank Renaissance announces a virtual event in partnership with the Japan Society of New York City entitled “Looking for the Next Global Rap Star in Japan.” Moderated by journalist Patrick St. Michel and taking place via Zoom on Tuesday, March 23rd at 7 PM ET, the event will feature conversations with pivotal members of the Frank Renaissance collective about their passion for Japanese hip-hop, and their mission to share that passion with a global audience.

Panelists include Frank Renaissance co-founders Frankie Caracciolo and Ren Stern, Tokyo-based creative producer Aya Apton, and New York-based A&R consultant Kayvan Daragheh. Moderator Patrick St. Michel has written about Japanese music and culture forThe Japan Times, Pitchfork and Bandcamp, and his own blog Make Believe Melodie. The conversation will traverse the history of Japanese hip-hop, examine where industry is now overseas and in the west, and discuss how it can improve in the future.

“Looking for the Next Global Rap Star in Japan” is the first installment of the Japan Society’s 333 Contemporaries series, which seeks to engage younger patrons who have a deep affinity for Japan and Japanese culture through a series of curated events and programs. Register for complimentary event tickets here. Attendance is free on a first come, first serve basis, subject to capacity limitations.

“We’re thrilled to be part of the inaugural event for the Japan Society’s 333 Contemporaries Series” said Stern, Co-Founder of Frank Renaissance. “Japan Society is such a prestigious institution and we look forward to introducing Japanese hip-hop to a U.S. audience through this platform.”

Michelle Wakabayashi, Assistant Director, Individual Giving and Membership, and curator of the 333 Contemporaries series added: “Japan Society is launching this new series to introduce Japanese culture to a younger audience. We couldn’t be more excited to partner with the Frank Renaissance team for our inaugural event at such an opportune time for Japanese hip-hop.

Founded in 1907, Japan Society in New York City presents sophisticated, topical and accessible experiences of Japanese art and culture, and facilitates the exchange of ideas, knowledge and innovation between the U.S. and Japan. More than 200 events annually encompass world-class exhibitions, dynamic classical and cutting-edge contemporary performing arts, film premieres and retrospectives, workshops and demonstrations, tastings, family activities, language classes, and a range of high-profile talks and expert panels that present open, critical dialogue on issues of vital importance to the U.S., Japan and East Asia. Japan Society is located at 333 East 47th Street between First and Second avenues (accessible by the 4/5/6 and 7 subway at Grand Central or the E and M subway at Lexington Avenue).

Launched in 2020 and led by Ren Stern and Frankie Caracciolo, Frank Renaissance’s goal is to share Japan’s most exciting creations in music and art with the world. Stern, who grew up splitting his time between Japan and New York and has a background in venture capital, shared his love for Japanese hip-hop and art with Caracciolo, his close friend from college, who has written for Pitchfork, Complex, and Vice, and works with Coltrane Curtis at Team Epiphany. With Stern based in Japan, Caracciolo visited Tokyo in 2019 to explore what they could build together around their shared passions. This trip was the spark that lit the Frank Renaissance fire. Enlisting the help of Tokyo-based creative producer Aya Apton, New York-based A&R consultant Kayvan Daragheh (known for his work at Genius), and KM, a leading Japanese record producer and Frank Renaissance’s Resident Beatmaker and Music Director, the company strives to bridge the gap between Japan and the West.

FOR ALL MEDIA INQUIRIES: