Richard Marx, one of music’s most prolific and successful songwriters and hitmakers, has unveiled an eventful year of exciting new projects and career firsts, including his published memoir Stories to Tell (July 6, Simon & Schuster), a TalkShop Live book event, a “Limitless Hits Live” concert livestream and a new two-disc special edition of his 2010 album Stories to Tell.

Marx’s 30-plus year career is documented in his entertaining and candid memoir, Stories to Tell (Simon & Schuster), featuring his colorful, personal experiences with the art and business of music. In his straightforward style, he recounts an amazing artistic journey, including his remarkable 1987 self-titled debut — a triple-platinum album with four top 3 songs in the Billboard Top 100 — his fourteen #1 songs, collaborations with artists including Luther Vandross, Keith Urban, Josh Groban, NSYNC, and Natalie Cole, life on tour, the darker side of the music business and the rewards of connecting with fans.

Marx also acknowledges becoming a Twitter celebrity, thanks to his outspokenness on social issues. Last year he told Stereogum, “I’m the same on social media as I am in my life, which is I don’t surround myself with people who say exactly the same things that I do about everything, because I don’t think you really learn from that.”

Ahead of the book’s publication, Marx will hold a TalkShop Live digital event on Wednesday, May 5th at 4 PM PT / 7 PM ET where he will discuss the memoir, field audience questions and perform songs acoustically. Copies of Stories to Tell ordered via TalkShop Live will be signed. More info here: 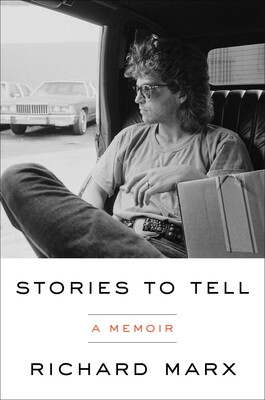 Returning to the stage, Marx and band will perform a full, livestream concert, “Limitless Hits Live,” on Friday, May 7th at 5 PM PT / 8 PM ET. The show will remain available for streaming and will be on Pay Per View cable and satellite systems throughout the Mother’s Day weekend. Throughout, he and the band will perform all of his greatest hits as well as songs from 2020’s Limitless — his 14th album release — a record of original songs co-written alongside his son Lucas Marx, Sara Bareilles, Morgan Page, Mat Scannell (Vertical Horizon), Jason Wade (Lifehouse), and Marx’s wife, Daisy Fuentes. The concert provides an opportunity to hear live performances of songs released in February 2020 for a tour cut short at the start of the COVID-19 pandemic.

Also in 2021, Marx plans a special release of his acclaimed 2010 album, Stories to Tell. The intimate album features new music and reworkings of Marx’s previous hits alongside his interpretations of songs he penned for other artists, including Josh Groban’s “To Where You Are,” Lifehouse’s “Had Enough,” and Keith Urban’s country hit, “Everybody.”

Grammy-winning singer, songwriter, and producer Richard Marx has sold more than 30 million albums worldwide, landing a #1 song on the charts (for himself and others) in each of the past four decades. He remains the only male artist in history whose first seven singles reached the Top 5 on the Billboard charts. A father to three grown sons (all are musicians), he lives between LA and Miami with his wife Daisy Fuentes. Marx is active in many charitable organizations, including the Cystic Fibrosis Foundation, the American Cancer Society, St. Jude’s Children’s Research Hospital, and Mercy for Animals.