How To Be The Best You: Erick The Architect’s Future Proof Festival Monday February 22 Live Exclusively On Twitch  | Shore Fire Media

Press ReleasesHow To Be The Best You: Erick The Architect’s Future...All Releases

How To Be The Best You: Erick The Architect’s Future Proof Festival Monday February 22 Live Exclusively On Twitch 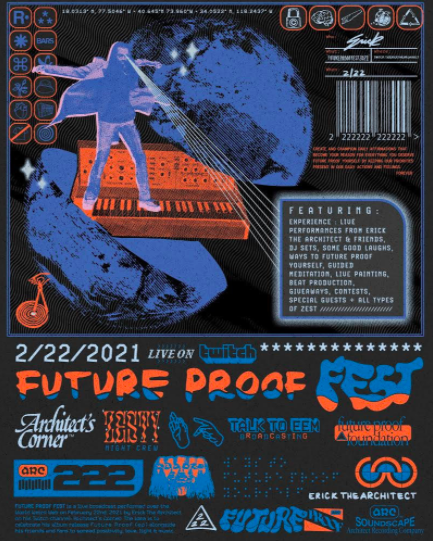 On February 22, Erick the Architect will host a first-of-its-kind virtual festival on his Twitch channel. Future Proof Fest will feature live performances and beat-making, meditation, live art, merch drops, exclusive remixes/covers and more; a 4-hour interactive event of positivity and creativity, all on the theme of how to “future proof” yourself to be the best you.

Erick launched his solo project debut in January with Future Proof, a 5-song EP written as he processed the catastrophic events of last year. Out of his anger, fear and frustration came the realization that we must better ourselves to face the inevitable challenges that lie ahead. Part free-wheeling music fest, part self-improvement workshop, Erick envisioned this festival to explore these ideas in a novel, experiential way, inviting the world to be better alongside him. Future Proof has been covered by Complex, Hypebeast, High Snobiety, the Fader, XXL, NPR Music, Brooklyn Vegan and beyond, and features Loyle Carner, Col3trane, FARR, Sophie Faith, Linden Jay and Pip Millett.

Listen to "I Can't Lose": https://www.youtube.com/watch?v=hOGtguBwbkw

Future Proof Fest will take place live on Monday 2.22 and will start at 2:22PM ET. The event will include:

*Performance: Erick will perform Future Proof live from a soundstage

*Meditation: A sound bath of ambient sounds and visuals

“Let It Go” Remixes: Erick will be playing remixes created by fans of Erick’s song “Let It Go.”