Watch the Trailer for Rainbow - The Film HERE 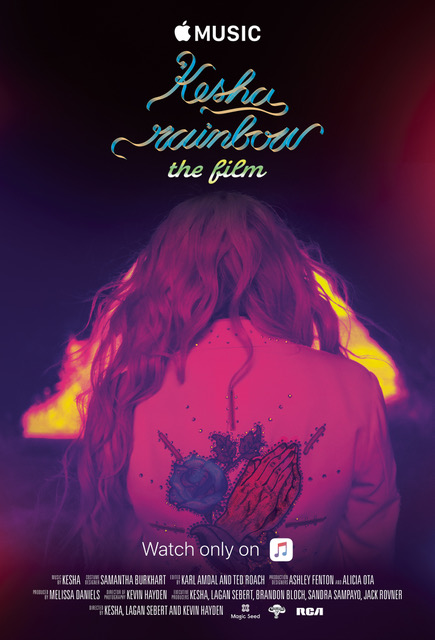 On August 10, Kesha will be celebrating the one-year anniversary of her two-time GRAMMY-nominated album 'Rainbow' by releasing a behind-the-scenes documentary on Apple Music. Directed by Kesha along with her brother Lagan Sebert and Kevin Hayden, and produced by Magic Seed Productions, The Rainbow - The Film details the creation of the album and echoes her most recent LP's messages of self-love, perseverance and strength.and strength.

Rainbow - The Movie mixes truth documentary with psychedelic thumbnails to share the story of Kesha's battle with inner demons and real life struggles. real life struggles. An inspiring story of redemption meditating on how some of life's darkest setbacks, the movie features a plethora of previously unseen footage chronicling Kesha's joy playing rock clubs and dive bars around the country, writing and recording 'Rainbow', preparing for her daunting yet triumphant performance at this year's GRAMMY Awards and more.

ABOUT KESHA: Kesha attracts a diverse, socially-minded global audience who believes in the messages behind the music as much as they want to have a great time. Over the top ten singles, over a billion views on YouTube, and tens of millions of followers across social media. Kesha's latest album 'Rainbow', called "an artistic feat" by Entertainment Weekly and "the best music of her career" by Rolling Stone, marks a new beginning for Kesha. 'Rainbow' earned Kesha the first GRAMMY nominations of her career this year, with 'Rainbow' up for Best Pop Vocal Album and 'Praying' getting a nod for Best Pop Solo Performance. She was recently named one of Time Magazine's Time 100, their most influential people in the world.