After spending several years performing it on tour, stunning crowds with the show-stopping staple of her live set, Margo Price has finally released her song "Long Live The King" as an official single. A favorite of both Price and her fans, the lyrics serve as a tribute to Elvis Presley, Martin Luther King Jr. and John Lennon. As Price ascends from tender eulogies to belting leads, the arrangement erupts into a wall of horns, organ and gospel choir. "'Long Live The King' is a song about three extraordinary men who changed the course of history for the better," says Margo Price. "But no one is without flaw and they each had a duality in their personalities. This song is also about not idolizing celebrities or putting people up on a pedestal because we are all human and we all make mistakes."

Listen to "Long Live The King" via Loma Vista:

Today, Margo Price has also announced her own mail-order record club, A Series of Rumors. Over three monthly shipments, A Series of Rumors members will receive a limited edition, autographed box of 7" vinyl records featuring the music of Price's 2020 album, That's How Rumors Get Started, backed with exclusive B-sides, covers and unreleased collaborations. Some are lost songs from That's How Rumors Get Startedsessions at both Hollywood's East West Studios and Nashville's Butcher Shoppe; others are from pre-production sessions in Texas with Band of Heathens, or lockdown recordings with Price's band The Pricetags.

For the initial installment, "Long Live The King" will appear as the B-side to Rumorshighlight "Hey Child," in addition to "Twinkle Twinkle" b/w Price's take on Bobbie Gentry's "He Made a Woman Out of Me," and "Letting Me Down" b/w "I'd Die For You" (Synthphonic). The first set of records will ship now, and subscribers will receive their second/third deliveries in June/July.

All future B-sides will remain secret until they arrive to fans. Learn more about A Series of Rumors and join the club: https://found.ee/MP_ASeriesofRumors

At 9pm ET on May 21st, fans can also see Margo Price perform "Long Live The King" in a special livestream of the historic, sold-out run of shows she headlined at Nashville's Ryman Auditorium three years ago to date. The free streaming event, hosted by nugs.net, also falls on the one-year anniversary of Perfectly Imperfect at The Ryman, the live album that Price surprise-released to benefit COVID-19 relief throughout 2020.

Tune in here, and watch the trailer: https://www.instagram.com/p/COvkzlwp_Jg

On May 28th, Margo Price and her band will headline their first in-person concert of 2021, outdoors at Pelham, TN's socially-distanced Caverns Above Ground Amphitheater. Price will also appear at Kentucky's Railbird Festival in August, before joining Chris Stapleton for a number of dates this fall. She will have more shows and festival performances to announce soon, and has been hard at work as the newest addition and first-ever female artist elected to Farm Aid's Board of Directors. Find tickets and tour updates here. 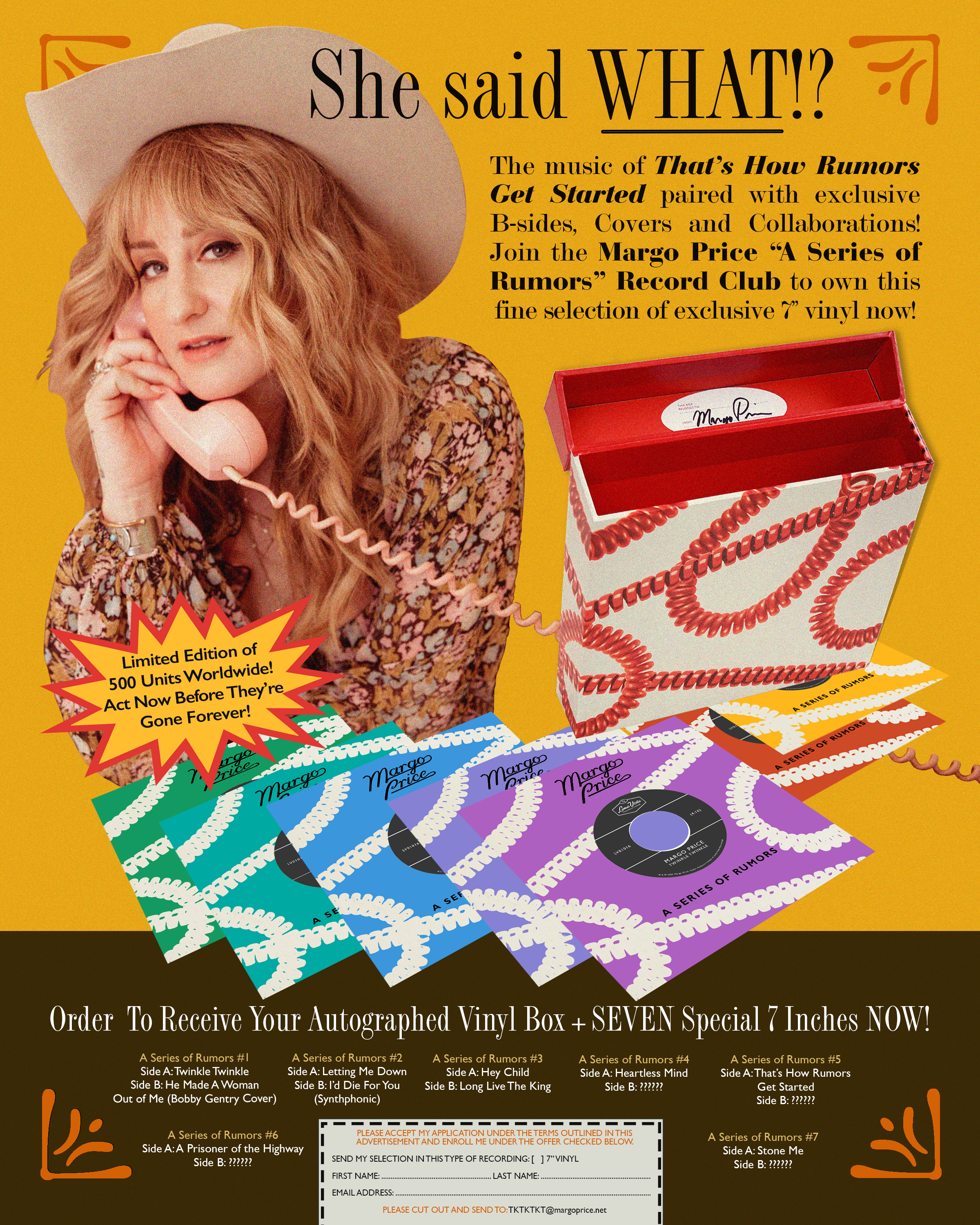