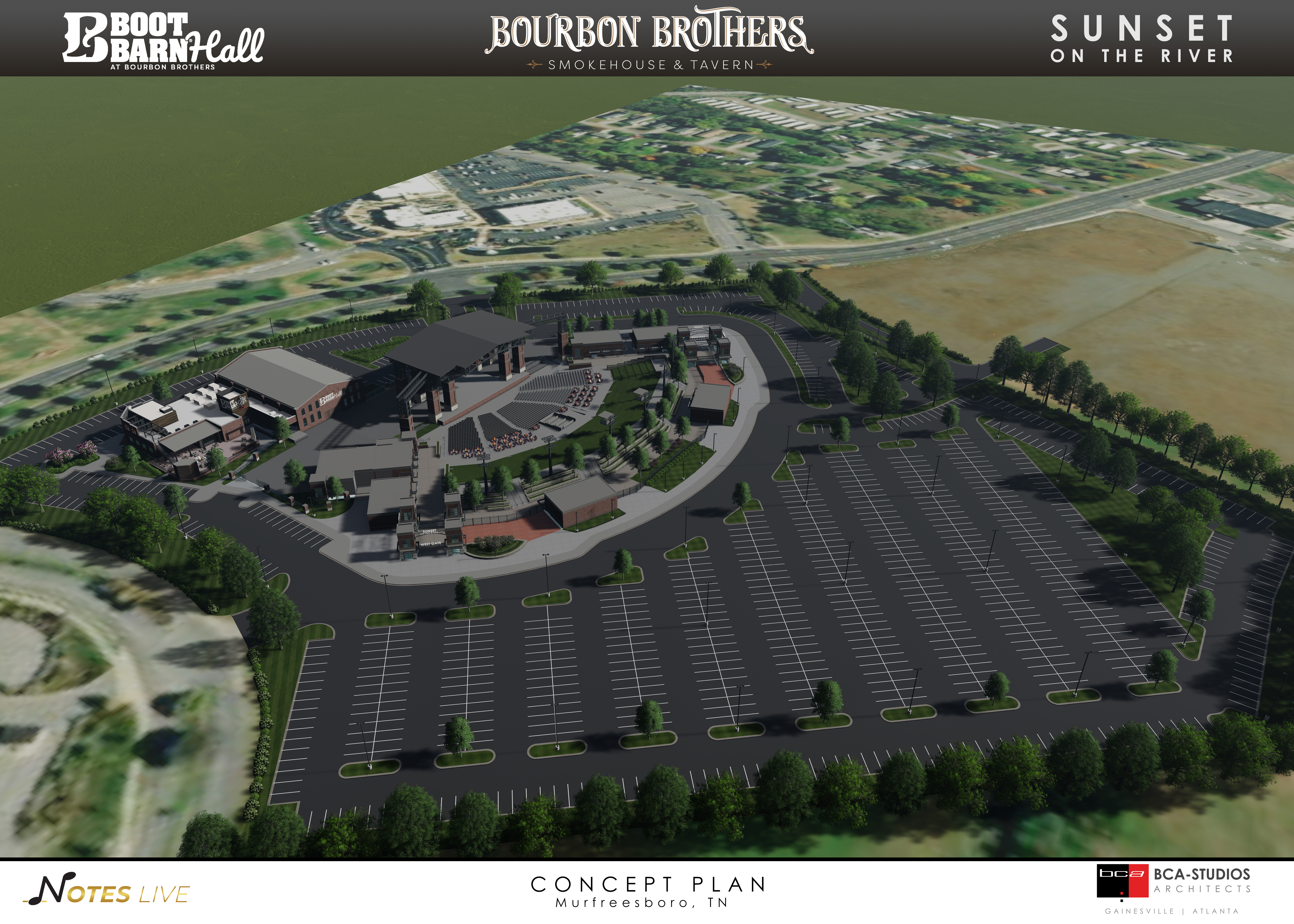 MURFREESBORO, Tenn. -- The Murfreesboro City Council voted Wednesday (Aug 10) to approve a finalized Development Agreement with Notes Live INC for a new live entertainment campus at the southeast corner of Medical Center Pkwy and Gateway Blvd. The City and Notes Live finalized the proposed agreement this month. Construction of Bourbon Brothers and Boot Barn Hall is estimated to take 18 months and the amphitheater 20 to 24 months following design approval by the Planning Commission and Council.

"We are excited to finalize the agreement for the high-quality entertainment venture featuring live music in both indoor and outdoor settings," said Mayor Shane McFarland. "The public-private partnership will add an attractive amenity to our City and elevate Murfreesboro in the Nashville music scene. On behalf of the City Council, I thank Notes Live for making this substantial investment. We can't wait to see construction and live performances get underway along with necessary infrastructure enhancements to Medical Center Parkway."

Mayor Shane McFarland and JW Roth, chairman of Notes Live, INC, unveiled plans on May 19, to open a 4,500-seat state-of-the-art, open-air amphitheater in the Murfreesboro Gateway called The Sunset Music Colosseum on the Stones River. The amphitheater will be located on land that Notes Live will purchase from the City.

The agreement also provides for the development of other venues on the Gateway site:

The Development Agreement calls for a number of off-site infrastructure improvements including the extension of Gateway Boulevard to Robert Rose Drive with connection to signalization of Warren Street at Medical Center Pkwy (Fire Station 4). The $7.1 million Gateway Extension Project received unanimous approval from City Council July 21 as part of a reallocation of CIP funding from FY 21-22 Bond Proceeds.

While amphitheater venue traffic can be managed appropriately, similar to other medium to large-scale sports and entertainment events, the City and Council has also identified the need to expand Medical Center Parkway to improve traffic flow with a three-phase road-widening project beginning in early 2023. This approximately $26 million infrastructure improvement is independent of the Notes Live Project and could be completed by 2026-27. Council voted July 21 to reallocate CIP funding from FY 19, FY 21-22 Bond Proceeds to add an additional through lane in both directions.

Council voted to reallocate CIP funds to the Medical Center Pkwy expansion so the critical project could be initated sooner. 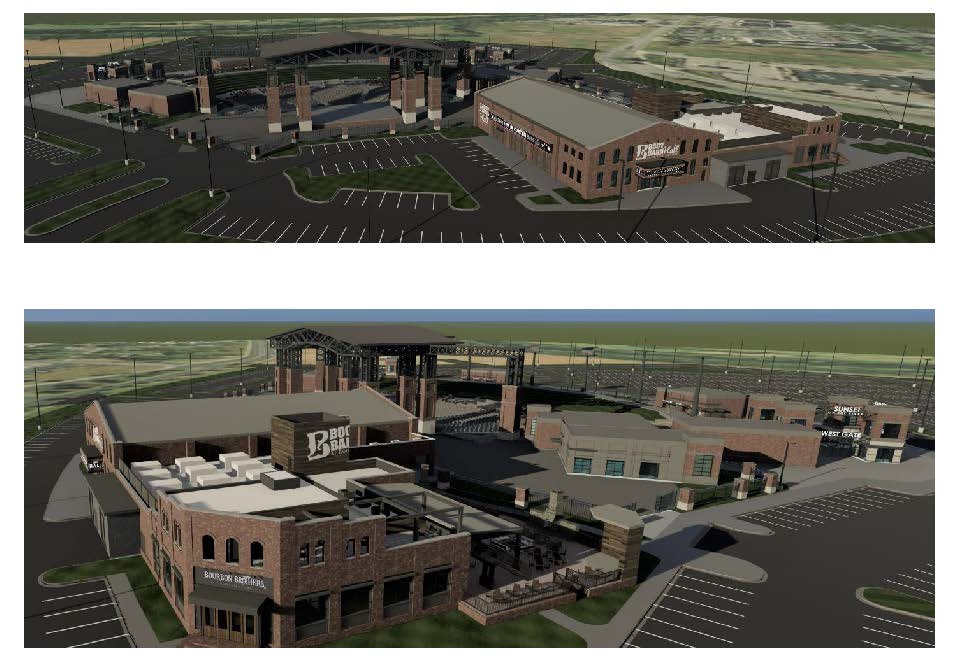 Under the revised Development Agreement,

JW Roth, Notes Live Founder and CEO, said: "We couldn't be happier to partner with the city of Murfreesboro. A show at the Sunset on the River will be a live music experience unlike any other. We expect our live streaming and content strategy to make 'Live from Murfreesboro' a household name in every living room in America. Along with Bourbon Brothers Smokehouse and Tavern and our indoor concert venue, Boot Barn Hall, Murfreesboro is the perfect place for our next Notes Live campus."

Nationally-recognized Younger Associates has completed an analysis of the economic benefits of the Notes Live Project. The annual economic impact of the project is estimated at approximately $50 million ($500 million over 10 years) with an additional $36 million economic impact from construction, supporting 150 jobs and $7 million in wages. Full-time jobs, direct and indirect, are projected to be 138. Total local tax revenue is estimated at approximately $428,000 annually after operations begin with a 10-year benefit to local taxes of $8.5 million. Property taxes are boosted by approximately $6 million.

The Murfreesboro Boot Barn Hall will be modeled after a similar Notes Live venue in Colorado Springs, which opened in February 2019, adding an 8,000-person state-of-the art outdoor amphitheater in 2022. The Sunset in Colorado Springs amphitheater is on the same campus with Bourbon Brothers. Additional venues are underway in mid-sized markets with growing populations, including Gainesville, Georgia, a suburb of Atlanta.

Notes Live identifies markets in fast-growing regions with live entertainment featuring unbeatable sound, sightlines and elevated food and beverage offerings. Murfreesboro is an attractive high-growth area, located along major corridors near the Music City. The public-private partnership fits the City's long-term vision for an amphitheater within the City as part of park development. Livestreaming from the amphitheater and the neighboring indoor venue, the Boot Barn Hall, are anticipated.

Notes Live, founded by Colorado Springs-based entrepreneur JW Roth, is the rapidly growing live-entertainment company that by the end of 2023 will be operating a half dozen large and mid-sized premium music venues across the West and South. The company identifies areas with growing populations but a dearth of high-quality music and entertainment venues and offers premium concert experiences, complete with unbeatable sound and sightlines as well as elevated food and beverage options.  It currently boasts a Colorado Springs entertainment campus with the Boot Barn Hall concert venue, Bourbon Brothers restaurant, and Buttermilk breakfast eatery and will have launched similar locations in Georgia, Florida, Tennessee, and Texas by the by the end of 2023, as well as the company's crown jewel:  The Sunset, a state of the art, 8,000-person open-air amphitheater in Colorado Springs that will host the largest touring acts in the country.

For more on Notes Live or The Sunset, contact Luke Garcia (lgarcia@shorefire.com)

More info at https://noteslive.vip/ or at the Notes Live press page: https://shorefire.com/roster/notes-live