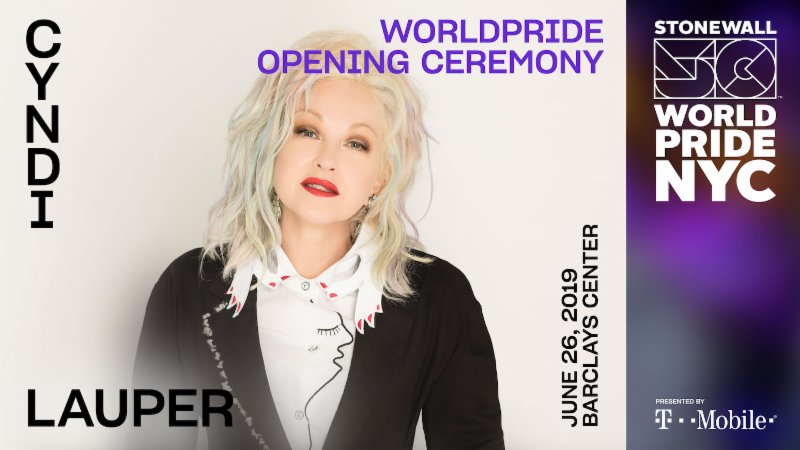 NEW YORK, NY, APRIL 05, 2019 – NYC Pride, the host of WorldPride 2019 | Stonewall 50, formally unveiled today the location and initial talent line-up of the official Opening Ceremony of WorldPride. The Wednesday, June 26, 2019, 7-10pm Ceremony will be formatted as a benefit concert at Barclays Center in Brooklyn. Proceeds from the ticket sales to this historic concert event will support Ali Forney Center, Immigration Equality, and SAGE – three leading organizations in the LGBTQIA+ movement based in New York City.

Prolific entertainer and internationally-recognized humanitarian, Whoopi Goldberg, will host the ceremony, featuring a growing medley of acclaimed speakers and performers. Cyndi Lauper, iconic performer for the LQBTQIA+ community and New Yorkers alike, leads the initial release of the talent line-up.

A decorated actress, comedian, author and television personality, Whoopi Goldberg is among a very elite group of artists who have won an Emmy, Grammy, Oscar and Tony (EGOT), along with a Golden Globe. Although born and raised in New York City, she performed in San Diego and the Bay Area with the Blake Street Hawkeyes theatre troupe, where she created the characters that became “The Spook Show,” later evolving into her hit Broadway show, Grammy Award-winning album and the HBO special that helped launch her career.

“I’ve been a longtime advocate of the LGBTQIA+ community and this year marks a pivotal moment within our storied history and fight for equality,” said Goldberg. “Hosting a WorldPride event is an absolute honor and I am delighted be a part of the Opening Ceremony in June.”

Cyndi Lauper is a groundbreaking Grammy, Emmy, and Tony Award-winning artist with global record sales in excess of 50 million. Her unmistakable voice, influential style, and infectious performances have catapulted her to stardom from her roots in Queens. Tireless in her advocacy work, she’s a lifelong activist who champions the underdog – especially women, people living with HIV/AIDS and the LGBTQIA+ community.

“I am thrilled to be a part of the WorldPride Opening Ceremony,” said Lauper. “I can’t wait to celebrate with my LGBTQIA+ friends and family from across the world.”

“In celebration of WorldPride 2019 | Stonewall 50, NYC Pride is dedicated to broadening its commitment to serving the LGBTQIA+ community,” said Chris Frederick, Executive Director of NYC Pride, “Every ticket sold to this 10,000-seat event is supporting some of the best service and advocacy work being done in our community by Ali Forney Center, Immigration Equality and SAGE.”

The Ali Forney Center is the nation's largest and most comprehensive agency dedicated to LGBTQ homeless youths—assisting nearly 1,800 young people per year through a 24-hour Drop-In Center, which provides over 65,000 meals annually, medical and mental health services through an on-site clinic, and ascattered-site housing program.

SAGE is the world's largest and oldest organization dedicated to improving the lives of lesbian, gay, bisexual, and transgender (LGBT) older people. Founded in 1978, and headquartered in New York City, SAGE is an organization that offers supportive services and consumer resources to LGBT older people and their caregivers.

Immigration Equality is the nation’s leading LGBTQ advocating for people from around the world fleeing violence, abuse and persecution because of their immigrant rights organization, representing and sexual orientation, gender identity or HIV status.

Tickets for the WorldPride Opening Ceremony will go on sale April 12th at 10:00am EST at https://2019- worldpride-stonewall50.nycpride.org/events/opening-ceremony.

Additional talent announcements will be released in the upcoming weeks ahead.

WorldPride 2019 | Stonewall 50 will be comprised of more than 25 different events for LGBTQIA+ and allied people during the full month of June, 2019. Throughout the course of the celebration, all WorldPride events will ladder up to the foundational theme, “Millions of Moments of Pride.” Join New York City, and the world, this June as we honor the past, celebrate our differences and march together for our future. For more information and talent press kits visit: www.worldpride.org.

ABOUT HERITAGE OF PRIDE

Heritage of Pride, Inc. is the volunteer-directed organization behind the official NYC Pride roster of events. Heritage of Pride’s mission is to work toward a future without discrimination where all people have equal rights under the law. We do this by producing LGBTQIA+ Pride events that inspire, educate, commemorate and celebrate our diverse community.