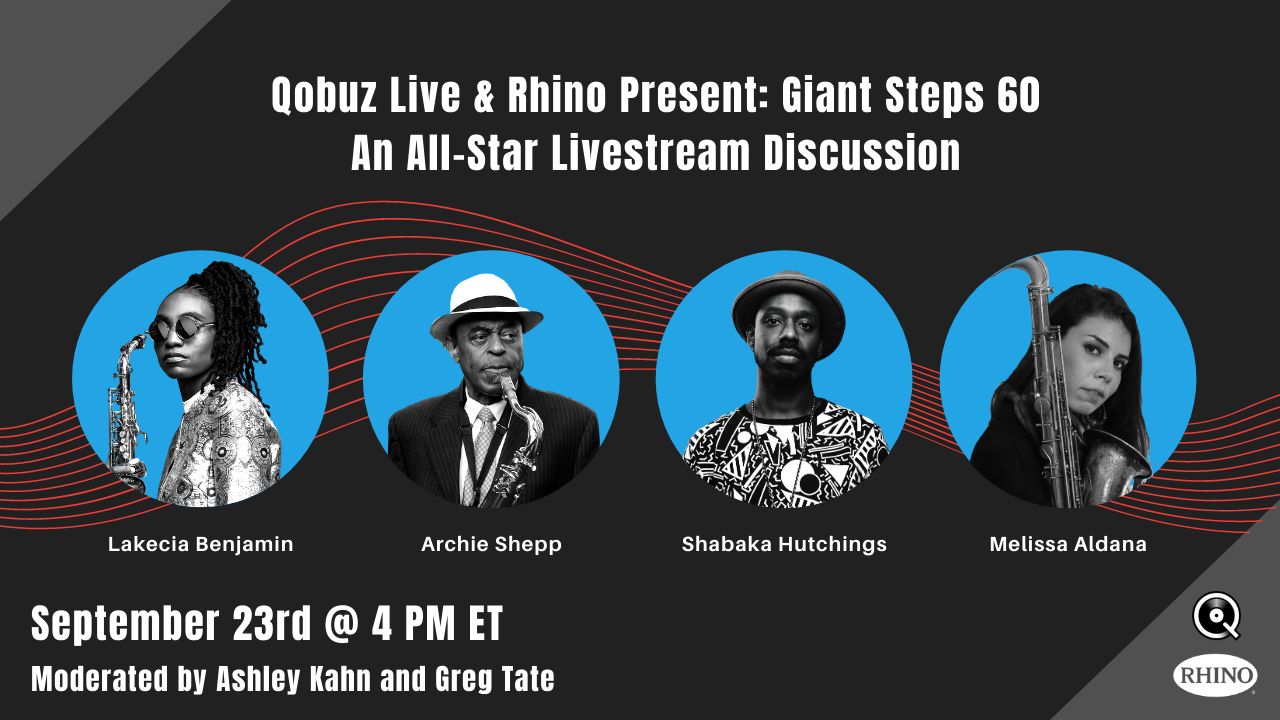 This in-depth conversation will stream live across multiple channels, including Facebook Live (from Qobuz USA’s Facebook page, as well as John Coltrane’s), YouTube, and LinkedIn, and be available afterward for on-demand viewing. RSVP HERE. The discussion will celebrate John Coltrane and his enduring musical imprint, focusing on the recording of Giant Steps, its initial impact upon release, and its lasting influence and relevance today. As a bold, revolutionary statement by an African American pioneer, Giant Steps inspired and was heard as part of the soundtrack to the Civil Rights era; Coltrane himself spoke of his desire to create music that could reach people’s hearts, to share his message of connection and love. Sixty years on, the album’s importance and stature remains undiminished, serving as a guiding light to a new generation of African American musicians seeking to empower and uplift with their music at a time when it is most needed.

●  Saxophonist and educator Archie Shepp, one of the leading figures of the 1960s avant-garde jazz scene and whose friendship with Coltrane led to a recording contract and some of the most era-defining recordings.

●  Jazz and R&B saxophonist Lakecia Benjamin, who performed at President Barack Obama’s Inauguration, has performed with Alicia Keys, Stevie Wonder, The Roots, and whose latest album Pursuance pays tribute to both John and his wife, Alice Coltrane.

●  Shabaka Hutchings, the celebrated British saxophonist and leader of three groups (Shabaka and the Ancestors, Sons of Kemet, and The Comet is Coming), now signed to Impulse Records, the label John Coltrane helped make famous.

●  Chilean-born saxophonist Melissa Aldana’s sound and tone have earned her widespread critical acclaim. In 2013, she was the first female instrumentalist to win the coveted Thelonious Monk Institute of Jazzcompetition.

●  GRAMMY®-winning Coltrane historian and NYU professor Ashley Kahnand author of two books on John Coltrane: A Love Supreme: The Story of John Coltrane’s Signature Album, and The House That Trane Built: The Story of Impulse Records

Qobuz USA Managing Director Dan Mackta said of the panel: “John Coltrane’s recordings hold an exalted place in our library. The incredible sound of this new remaster will inspire all who hear it. Putting together this panel event has been one of the most meaningful things we’ve been able to do since launching in the US last year.”

Rhino’s GIANT STEPS: 60th ANNIVERSARY DELUXE EDITION will be available on September 18 as a 180-gram double-LP set ($31.98) and as a double-CD set ($19.98) and is available for pre-order now. Both versions include the newly remastered version of the original album plus eight alternate takes. The recordings come packaged in a replica of the original sleeve and labels used for the album’s first stereo pressing, and the packages, each with a booklet, include photos, never-before-seen images of Atlantic Records ephemera, original liner notes, and new liner notes written by Grammy®-winning music historian, Ashley Kahn. As a special bonus, fans who order the 2-LP set from Rhino.com will receive a limited edition 7-inch vinyl single disc featuring alternate takes of “Giant Steps” and “Naima.” Also released for downloading and streaming on September 18, GIANT STEPS: 60th ANNIVERSARY SUPER DELUXE EDITION features the 35-track collection, which includes the original album, eight alternate takes, and 20 additional outtakes, all of which are newly remastered. Until now, many of the outtakes were only available on the 1995 set: The Heavyweight Champion: The Complete Atlantic Recordings.

John Coltrane’s Giant Steps – the influential jazz saxophonist’s first album with Atlantic Records – continues to astound and inspire listeners 60 years after its release. Considered a landmark in modern jazz improvisation, Giant Steps was inducted into the Grammy® Hall of Fame in 2001 and earned a rare honor in 2004 when it was selected by the Library of Congress for inclusion in the National Recording Registry. Several compositions on the album have become jazz standards, including the ballad “Naima” (named for his wife) and the title track. “People like to talk about Giant Steps as a test for young horn players and how he’s breaking new ground with some of the pieces,’ says Ravi Coltrane, son of John, who is one of many musicians who have spent countless hours with the music. “But it’s the accessibility that stands out for me. The accessibility, despite how challenging some of the material is. It’s still all very listenable and very joyful.”

An iconic figure of 20th-century jazz, John Coltrane continues to inspire a new generation of artists and listeners. An intensely emotional and spiritual force, Coltrane was prolific in his forty-year career, releasing 45 studio albums, 23 compilations, and 19 singles, including collaborations with such legends as Dizzy Gillespie, Duke Ellington, and Miles Davis. Posthumous awards include a Grammy®, the Grammy®  Lifetime Achievement Award, and a Pulitzer Prize citation. His life, legacy, and music live on through both the discovery of an unreleased album and his deeply engaged social following.

Rhino Entertainment is the catalog development and marketing division of Warner Music Group. Founded in 1978, Rhino continues to set the standard for excellence in the reissue business it pioneered in both the physical and digital worlds with an emphasis on flawless sound quality, bonus tracks, informative liner notes, award-winning creative packaging, and a strong social conscience. Rhino has also expanded the definition of what a catalog music company is, as evidenced by the label’s name and likeness representation deal with Frank Sinatra, its multi-faceted relationship with the Grateful Dead, and releasing new albums by heritage artists such as Jeff Beck and Cyndi Lauper. The catalog of more than 5,000 releases includes material by Led Zeppelin, Eagles, David Bowie, Fleetwood Mac, Aretha Franklin, The Doors, Chicago, Ray Charles, Black Sabbath, John Coltrane, Yes, Phil Collins, The Ramones, and The Monkees, among many others. www.rhino.com

Founded in 2007, Qobuz is the premier service for streaming and downloading high-quality music that meets the needs of demanding music lovers and audiophiles. Available in 11 countries in Europe and open in the United States since February 2019, Qobuz offers an exceptional range of exclusive editorial content written by a team of experts. With a catalog of more than 50 million total tracks, Qobuz also has the largest number of high-resolution (hi-res) tracks on the market, with more than two million in 24-bit FLAC up to 192 kHz. For more information: www.qobuz.com

For more information on this panel and on Qobuz, please contact ﻿Hannah Schwartz (hschwartz@shorefire.com)

Want to see what a debate SHOULD look like? The latest from @IQ2US starts now. Three questions being debated: 1.… https://t.co/QB6SGbl9nd