Today, Scarypoolparty (aka Alejandro Aranda) announces the Nov. 22 release of his debut full-length ‘Exit Form’. Scarypoolparty’s exceptional debut highlights his chops as a musical wunderkind, fusing fast-paced walls of sound in a intricately-woven collage of pulsing beats, in a sound “reminiscent of the genre-blending [Post] Malone” on tracks like “Tonight” and “Cholo Live” to “Ministry-like industrial rock vibes” on his latest single “Diamonds” (Alternative Press).

“‘Exit Form’ is designed to be a journey,” says Aranda. “Brutal in the beginning with each track leading to something beautiful and simple.”

In the last 6 months, the 25-year-old has emerged at the forefront of LA’s underground scene. From busking and playing backyard parties, to backing his mentor Twin Shadow, to being a judge-favorite on this year’s American Idol, his unrivaled musical prowess has continually set him out at the front of the pack. Scarypoolparty played his first-ever full band show at Lollapalooza this summer and has since played Life is Beautiful and Austin City Limits. He was recently added as one of the headliners of the 2020 Rose Parade on January 1st in Pasadena, CA. Accompanied by a 3-piece band, Scarypoolpartywill wrap his 30-date debut headlining tour on Nov. 22 with back-to-back, sold-out nights at LA’s Belasco Theatre with Twin Shadow as support before heading to London for two debut sold-out shows. 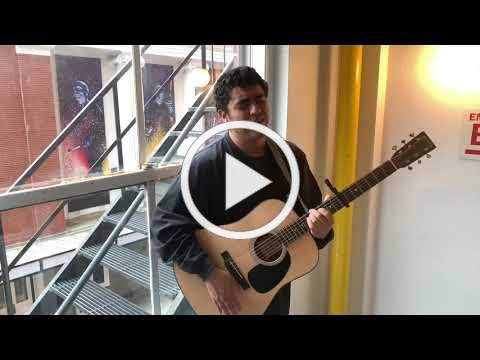