Hit Single “Panic Attack” In It’s 10th Week At #1 On Rock Radio In Canada, While Climbing Inside The Top-5 At Rock Radio In The US

Just two days after their massive sold-out hometown stadium show at Kingston’s Richardson Memorial Stadium, JUNO Award-winning rockers The Glorious Sons have announced their 2020 “A War On Everything” North American headlining tour produced by Concerts West/AEG Presents. Kicking off in Pennsylvania on January 16, the sweeping 40+ date tour will hit iconic venues across major cities throughout the U.S. and Canada including stops in New York, Los Angeles, Toronto and Vancouver before wrapping in Montreal on April 11. Joining the tour as special guests are Des Rocs (U.S. dates) and Black Pistol Fire (Canadian dates). The tour announcement follows the celebrated release of the band’s brazen and brutally honest new album A War On Everything (9/13 via Black Box/BMG), and marks the group’s highly-anticipated return to Scotiabank Arena in Toronto, where they wrapped the critically acclaimed larger than life “S.O.S.” tour last November.

A daring 14-track collection of stadium-ready, “dirty, sweaty rock” (Alternative Press), rife with devastating moments of vulnerability and searing insight into universal truths about anxiety, sadness and isolation in the 21st century, A War On Everything was produced by Frederik Thaae (Kate Nash, Atlas Genius), and recorded at North of Princess studios in the group’s hometown of Kingston, ON. Billboard hailed the record’s “turbulent guitar licks,” saying, “maybe the self-aware band thinks [rock] is dying, but they might just be resurrecting it.” Stuart Berman for Apple Music said, “‘A War on Everything’ heightens the tension between entertainment and inner torment at the heart of The Glorious Sons' sound.”

Watch the animated short for title track “A War On Everything” here.

The record marks the start of a new chapter for a band who earlier this year landed their first Billboard #1 with "S.O.S. (Sawed Off Shotgun)", which held the #1 spot at Active Rock in Canada for 10 consecutive weeks (4 at US Active Rock), spent a record setting 64 weeks on the Canadian Rock Radio Charts while earning CRIA GOLD certification, and is still one of the most spun tracks of 2019 at Rock Radio in North America, firmly planting The Glorious Sons in uncharted territory.

On September 21, The Glorious Sons played to a raucous hometown crowd to commemorate the release of A War On Everything, taking over Kingston’s Richardson Memorial Stadium for a 2.5 hour headline set for the over 14,000 fans in attendance. From headlining clubs to arenas and festival dates, 2019 saw the award-winning band play massive shows with The Rolling Stones and Twenty-One Pilots and tour across the U.S. with The Struts.

They band will tour throughout Europe this fall with Welshly Arms before kicking off their “A War On Everything” North American headline tour in January. 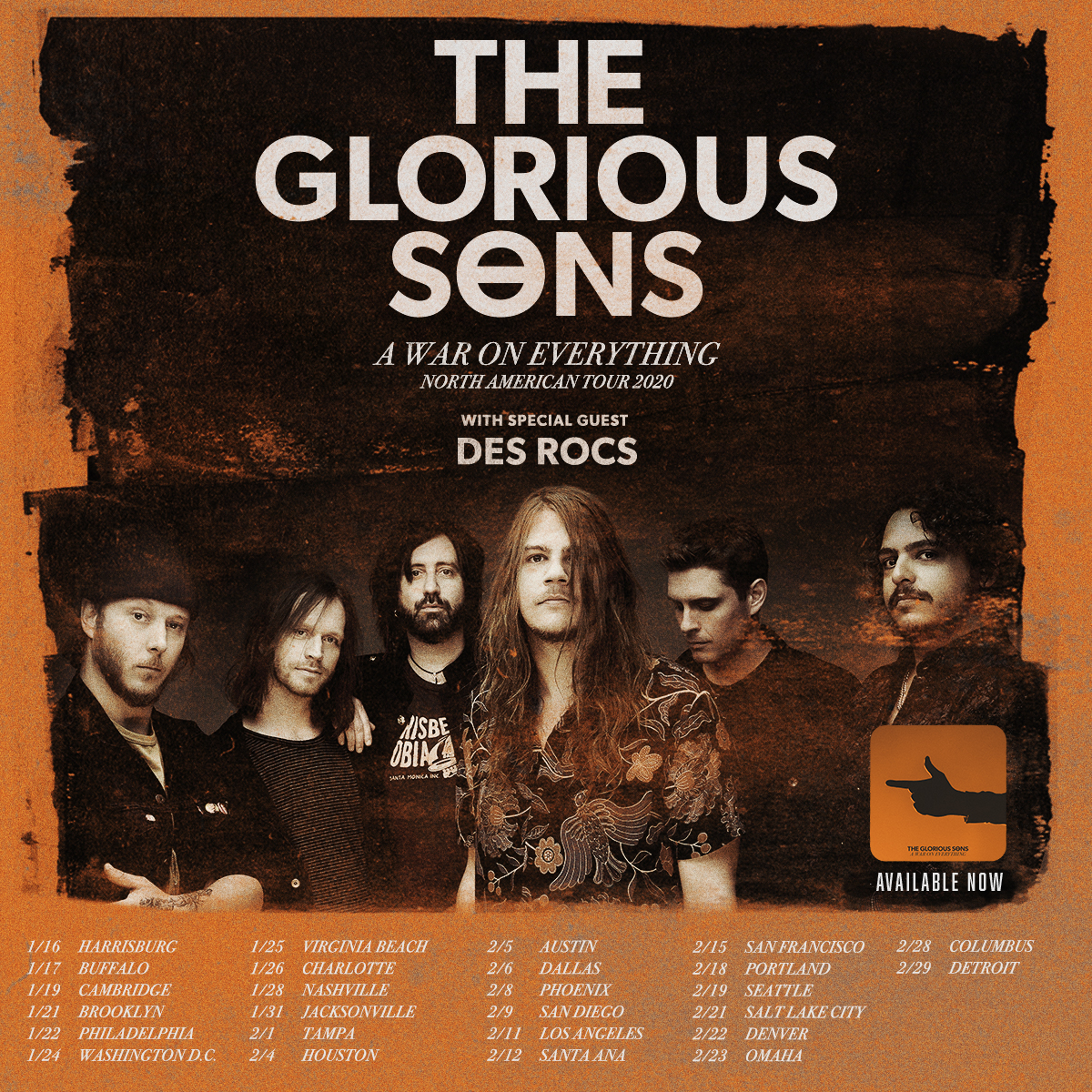 The Glorious Sons are: