Ahead of his long awaited studio album Apart Together, set for release on November 20th via BMG, Tim Minchin has revealed his fifth single ‘The Absence of You’. Minchin’s divine signature storytelling vocals infiltrate the stunning piano ballad, building to a powerful chorus that sits deeply within the listener. Each single release has unraveled another story; embedded and woven into the creation of the globally anticipated release of Apart Together.

Listen to ‘The Absence of You’

“In this weird year, we’re more aware than ever that the absence of a loved one can, in a way, be as impactful as their presence. This is a song about that, I suppose. It’s also a frickin banger.” said Minchin.

‘The Absence of You’ follows the release of previous single ‘Airport Piano,’ the music video for which premiered on Tim Minchin’s YouTube channel and has already amassed almost 150,000 views. The unique video was made during quarantine in the garage of the home he was staying in with his family. Despite limited resources, everything about the video screams Tim Minchin and his always impressive creative mind. Tim wrote about the process of making the video under covid conditions on his blog. 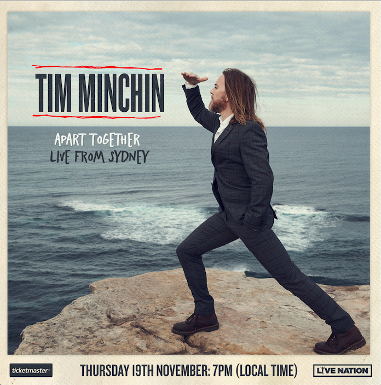 Tim Minchin, will perform the entirety of his new album, Apart Together, in a one-off concert from Sydney's iconic Trackdown Studios to be streamed at 7pm (local time) on November 19th, to celebrate the record’s general release.

Tim says: “I’ve been thinking a lot about how to make live entertainment in this no-live-entertainment world, and - as always - how to make a virtue of the restrictions placed on us as artists. And I’ve concluded that we have a fantastic opportunity to make a new style of “live” concerts. Not like the old model, where cameras are inserted into seats in an audience, or put on the shoulder of a camera operator dressed in black, skulking around the edges of the stage, pretending they don’t exist. But instead, I want to bring the audience into the room with us. I want the viewer to feel like they have been invited into the studio to watch the final dress rehearsal for a concert, and have been given permission to stand in amongst the band, to sit down next to me (ewww), to be completely inside the experience. This album we’ve made really lends itself to this sort of performance: the songs tell stories that ask the listener to stay engaged with every lyric; they are generally very personal; they vary in style from proper all-out rock-pop tracks to seriously intimate ballads. I really hope people settle in with a really good set of speakers, a really good friend or two, and a really nice bottle of wine, and let me see if I can’t give them an online performance that isn’t quite like anything they’ve ever seen. Oh. That sounds like porn doesn’t it. *It’s not porn”.

Featuring some extraordinary guest musicians, 11 songs, and whatever pours out of Minchin’s brain in between, the concert will be available online for just 48 hours, and will only be accessible to ticket holders. Tickets go on sale at 12pm Monday, November 2nd.

Tim will also be raising money in support of Ausmusic T-Shirt Day during the stream, with all proceeds going to music industry charity, Support Act. To donate go to: ausmusictshirtday.org.au

Minchin’s first single of 2020, ‘Leaving LA’ was acclaimed by NME and more. His second single was equally well-received; “I’ll Take Lonely Tonight” was praised by Rolling Stone and NME.

The album’s third single and album title track, ‘Apart Together’, was inspired by a story on LA radio station KCRW about an elderly couple in their mobile home who died of hypothermia in each other’s arms. The song tenderly teases out the improbable beauty of such an outcome, framing it in an exquisitely pensive setting. KCRW named the track one of their Top Tunes.

Tim Minchin is a veritable creative genius; he’s enjoyed continued worldwide success as a musical theatre composer-lyricist, countless sold out concerts, as well as being one of the most successful Australian comedians of his generation.

While it has taken Minchin until now to release his first “proper” album, it speaks volumes about the twists and turns his career has taken since he made the 14,500-mile journey to London from Perth in the hope of finding an audience for a kohl-eyed, shock-headed musical comedian. Minchin’s releases from the album are rising daily, currently with 1.7 million consecutive views on YouTube.

He has won Best Musical Olivier Awards and Tony Nominations for Matilda and Groundhog Day, as well as a Grammy nomination for the Matilda Broadway Cast Recording. A Member of the Order of Australia for significant service to the performing arts, Minchin sells hundreds of thousands of tickets to live shows in Australia, the UK and the US. He has most recently been seen in Upright, a Foxtel/Sky Atlantic production which he co-wrote, executive produced, starred in and wrote music for. Minchin also opened and closed the illustrious BAFTAs recently, at which he delivered a “hilariously bleak” (NME) bespoke original song to open proceedings.

“The Absence of You” is available for purchase and stream on all platforms now.