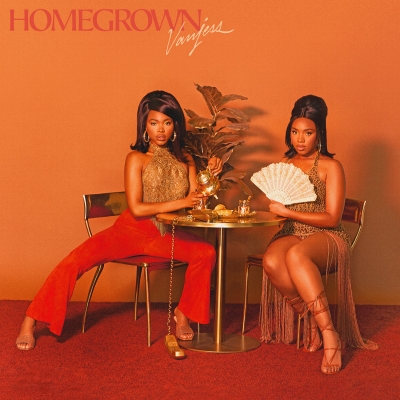 After months of teasing fans and captivating critics, VanJess releases their highly-anticipated EP ‘Homegrown’ via Keep Cool/RCA Records. “Among the best and brightest of this new school of R&B” (Heat Rocks), the Nigerian-American sister duo hone in on their glimmering, nostalgic sound to create a cohesive nine-song project that is sure to withstand the test of time.

In addition to ‘Homegrown,’ out today is the music video for “Caught Up.” The toe-tapping anthem features Phony Ppl (Megan Thee Stallion, Joey Bada$$) and a springy Pomo-produced beat that harkens back to classic funk influences. The “Caught Up” music video is a spectacle of luxury and Black Girl Elegance. Styled by Ugo Mozie & Daver Campbell and drawing upon Nollywood icons like Genevieve Nnaji, VanJess proudly puts their Nigerian roots front and center of ‘Homegrown.’

‘Homegrown’ hosts a robust group of collaborators, including KAYTRANADA, Devin Morrison and Jimi Tents. VanJess takes the listener through an alluring sonic journey that weaves through groovy, high energy beats and slowed down, sensual harmonies. From start to finish, a.k.a. from “Come Over” to “Come Over Again,” the nine song collection is a showcase of VanJess’ elevated vocal and visual stylings—a testament to the incredible heights they’ve reached since their debut album ‘Silk Canvas.’

Growing up between Lagos, Nigeria, and California, VanJess have brought an entirely new take to contemporary R&B, one that pays tribute to ‘90s greats like TLC, SWV, and Aaliyah, while instinctually inciting an inimitable style. The sisters cut their teeth online with a string of viral covers, bursting onto the scene with their self-released debut album, a definitive R&B statement, and a smooth, seductive record that took the R&B world by storm.

VanJess have previously worked with KAYTRANADA, Ari Lennox, and Xavier Omăr, to name but a few, and within the past three months have collaborated with some of their most acclaimed peers on songs including “Stickin’” (Sinead Harnett and Masego, who appeared on VanJess’ 2018 debut LP), “I Had A Love Song” (Ant Saunders), and “Floating” (Mannywellz).

"Firing on all cylinders" – E!

VANJESS ON THE WEB: