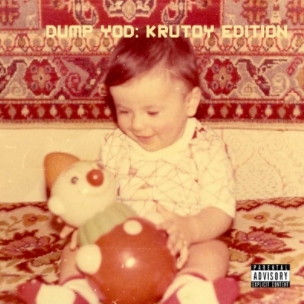 Today, Your Old Droog has unveiled the final in a trio of singles ahead of his new album Dump YOD: Krutoy Edition out this Friday. Deemed “one of the most prolific, beloved, and reliably clever New York rappers of his generation,” by Consequence of Sound, “Kyrgyzstan” is quintessential Droog. The new single finds the Ethnic rap impresario steadily wielding his sharpest blade in the toolbox through Megan Thee Stallion references, muffled Russian conversations and loaded lyrics: “Don’t get caught in the tailspin / the game is filled with a bunch of fake loyal snake oil salesmen.”

Your Old Droog also explores the inspirations behind the song via Consequence of Sound’s Origins feature, including Spike Lee’s Girl 6, scenes from Martin, Mobb Deep and his Eastern European roots. Read here.  Says Droog, "When I was teenager, I remember walking home all alone past what had to have been some sort of smoked fish factory. I remember walking that path many nights. I remember how lonely I would feel, trekking home at wild hours of the night all by myself. I don’t feel alone anymore. I feel that I have not only my Eastern European brothers and sisters behind me, but my family from Central Asia as well. I hid from my heritage for many years, sometimes out of pure survival. It took a long time to fully embrace who I am."

Previously released singles include "Ukraine,” which was praised by the likes of Stereogum, OkayPlayer, and Brooklyn Vegan, who described it as “hard-hitting, throwback-yet-refreshing New York rap.” His single "Pravda" expectedly touts a lineup of new and old school heavy hitters - deemed a “murderer's row of lyricists” by The Fader - with verses from El-P, Black Thought, Mach Hommy and Tha God Fahim.

Dump YOD: Krutoy Edition was executive produced by Mach Hommy, and mixed by Tha God Fahim. Droog grew up in Brooklyn as a Russian-speaking immigrant from the Ukraine, & the album finds him embracing and exploring his Eastern European heritage. The album includes features from Billy Woods and Phonte.

The album is now available for pre-order in digital and various physical formats. Deluxe vinyl editions include a blue and yellow Ukrainian flag-colored vinyl, Russian nesting dolls and album artwork “propaganda” posters. A limited edition 7-inch printed on x-ray film is also available, inspired by what is known as “Bone Music” or “X-Ray Music,” popular music etched into used X-rays that were made to smuggle banned music into the Soviet Union.