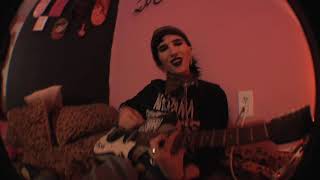 Cher Down and Out Music Video HQ Cher Strauberry grew up a street kid in Oakland, California, literally living in a punk house closet for a good decade. Spending her time playing in punk bands, making zines, spray painting graffiti and skateboarding her way across the Bay Area. As long as Cher had money for cigarettes and weed she was happy.

“I’ve played shows over a bucket in the desert on a railroad track with 6 drunk kids all screaming. I very much was that kid at those shows”

Cher’s oldest possession is her micro cassette recorder that her sister gave her when she was 13. Cher’s sister used to record her college lectures with it and now Cher uses it as her portable recording studio. Between that and her Sony walkman any time Cher has a song idea she can capture it on the spot. Cher is a prolific songwriter too, lost in the flow, an idea comes, she records it, the tapes fill up and then go into a box. Cher keeps moving on.

Maybe one day she’ll make a polished studio LP but for now she likes the way the cassette recorders sound. The medium being a part of the message, Cher’s lo-fi, DIY approach to making music almost acts as a litmus test to make sure you’re cool, to make sure you’re on the level, the same way her closet bedroom space did. When Cher would bring someone home to show them how she was living, if they recoiled then they weren’t on the level. Similarly, if you can’t hear the fun, power and pop of Cher’s songwriting through some high bias tape hiss, then maybe YOU aren’t on the level.

Cher Strauberry is pretty fucking good at skateboarding. If you look at Cher’s wikipedia page you will read most about Cher’s history as a skateboarder, beginning with how she took first place in the California Amateur Skateboard League at just 12 years old. Currently there are only just three sentences written about her music history and soon Cher’s wikipedia page will need even more updating than it already does now.

In 2019 Cher released a record called “I H8 ME” under the band name Twompsax. Marc Cross, the Williamsburg, New York tattoo artist put out the Twompsax record on his multi-media art label MUDDGUTS. Marc and Cher first met through instagram, connecting over mutual interest in skateboarding and graffiti. After Marc learned that Cher made music and he liked what he heard, he asked if he could put out a record. The two bonded super tight. Marc also became Cher’s first real skateboard sponsor, she considers him a father figure of sorts.

Cher didn’t anticipate the attention she would get through skateboarding from the outside world when she came out as transgender. In her head she thought she was just going to work on her skating, work on music, tour and quietly transition. But it didn’t happen like that at all.

“… Until the Smithsonian reached out to get my board I had no idea I was the first trans woman pro skateboarder..”

8 months into her transition Cher found herself being followed by documentary crews and often times being put on the spot to answer interview questions she didn’t necessarily know the answers too. Cher was still learning who she wanted to be and she had to learn a lot quickly, like how to set boundaries, how to write her own terms into a deal and how to define what exactly she is and isn’t comfortable with. Cher grew a lot from the experience.

There were big touring plans for Twompsax in 2020 but then Covid-19 happened and all of our plans changed. It was random luck and coincidence that brought the next opportunity and connection into Cher’s life. One night Cher went on Insta Live and played a song. It just so happened that non other than Chris Robinson, singer of the Black Crowes was watching with his partner Camille. Chris was blown away and immediately reached out telling Cher it was “one of the best songs he’s ever heard.” He offered to put out a record on his label Silver Arrow Records; a label otherwise primarily devoted to just putting out Black Crowes and Chris Robinson Band records.

Cher wasn’t really sure about the offer, she didn’t even know who the Black Crowes were (though she’s since learned). Cher did know who Chris’ partner Camille is though and Camille just so happened to be Cher’s all time favorite graffiti writer, tagging under the name “Dead Cat”. The two hung out and bonded hard over punk rock and graffiti. Once again Camille told Cher how much Chris loved the music and how much they’d love to all put out a record together.

It was Marc Cross who had always suggested that Cher release a solo album of all her “softer like cutesy songs or whatever” and that it should be called “Chering Is Caring” and the offer from Silver Arrow Records was just the opportunity needed to make it actually happen. With Cross’s support Cher said yes to Camille and Chris. With the Silver Arrow deal then in place and an album title already decided, Cher knew that the album was pretty much recorded too. But she was going to need help sorting through all the material she had, so she asked her friend Cole to assist. Back in an Oakland warehouse the two sat down together with Cher’s box of cassettes and listened through everything she had then on tape.

In part “Chering Is Caring” is an audio zine. Those are the bones of the album. In 2019 Cher had set out with her micro cassette recorder to document and make an audio zine out of an epic graffiti-spraycation-road-trip from Oakland to LA. Cher had two tickets and backstage passes to see Bikini Kill reunion shows at the Palladium. Cher asked her friend Zits if she wanted to go. Zits had a car and was down to drive. But Zits only listens to Kimya Dawson so that was the decided soundtrack to the adventure.

The weekend was a great success, the shows rocked and Alice Bag told Cher she had the best stage dive of the whole event. Cher & Zits grabbed recordings for the audio zine with Kathleen Hannah and Erika Lyle from Bikini Kill backstage as well as Alison Wolfe, the singer of Cher’s all time favorite band Bratmobile. Cher even grabbed a quick audio snippet with Rodney Biggenheimer, the legendary LA disc jockey who first spun bands like the Germs and Oasis. But after the trip the audio zine never happened and the tapes sat unused until Cole and Cher rediscovered them. Cole loved what he heard and suggested the two build “Chering Is Caring” around the Bikini Kill tapes.

While they were together Cher and Cole also tracked a couple more songs for the album using an old 4-track recorder that once belonged to Billie Joe Armstrong. To their surprise, when the two had finished compiling everything they had 32 tracks total. By far the most expansive album project Cher had yet taken on.

“Chering Is Caring” is divided up between 11 audio “snippets” or “interludes” and 21 songs. If the year was 1992 this record would most assuredly have come out on either Kill Rock Stars, K Records, or the Bay Area’s now defunct LookOut Records. Songs like “Swish and Spit” fit right in amongst bands like Blatz or Heavens To Betsy or Tiger Trap. Songs like “Failure To Send” specifically recall the 1st LP of the Kathleen Hanna offshoot, the Julie Ruin.

“… I’ll tell you literally what I was thinking of was Beck’s ‘One Foot In The Grave’, Julie Ruin 1st album, and the Wandering Lucy and Dear Norah records… a lot of it is just Beck’s One Foot In The Grave and the 1st Julie Ruin LP kind of combined into my own version of that…. it’s such a mix tape, it goes all over the place, full band, me talking to someone, the worst acoustic recording where you can barely make out my vocals, then a solid straight song…”

The track “Pressure” is the demo recording of a Twompsax song called “eight”. Cher says everyone always loved that song so she decided to included the original recording. Just like a zine each track on “Chering Is Caring” has a story behind it.

“Interlude 1” was recorded on the porch at her friends apartment in the pouring rain. Cher was crashing with her cause she was homeless at the time. When her friend would go to bed to wake up for work in the morning Cher would stay awake hanging on the front porch, smoking weed and writing songs. Though Cher may consider this her softer, cutesy side it’s all still pretty fucking punk rock.

With her friends support and encouragement Cher recently left Oakland and moved to New York. Cher has her own room in an apartment now. You can’t live in the closet forever. Cher plans to keep on doing Twompsax and she already has the next solo album written too, that’s going to be the one that has the song on it that Chris Robison said was one of the “best he’s ever heard”. Cher also plans to keep skating. Eventually, someday touring will happen again.

Strange new experiences and opportunities continue to present themselves for Cher and to challenge and expand her punk rock world. Cher did a photo shoot with Gucci recently. She felt conflicted about working for the fashion house behemoth but she knew that by doing the shoot she’d be able to pay like 6 trans girls rent, donate to organizations and causes she believes in and then still have some cash over to cover her own rent.

“Being able to wake up and just knowing that all I have to do is skate and play music and write in my journal or read a book and that’s my day and the rent’s handled is so sick.”

Gucci even let her keep the dress. She was going to sell it and again share the money with her community but her friends convinced her not too. It is by far the most expensive piece of clothing that Cher owns. She still feels kind of guilty about it. Though she says that maybe when shows are happening again she’ll wear it on stage just once and then sell it after that. Who knows, by then it may be worth a whole lot more money for Cher to do a whole lot more good with.