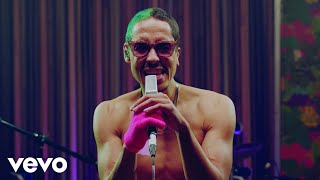 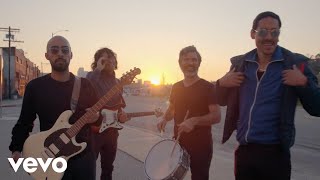 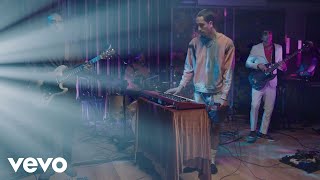 Like all the most iconic music born from the West Coast, Chicano Batman’s Invisible People offers an instant escape into the beautifully strange world they inhabit. Throughout their fourth album, vocalist/keyboardist Bardo Martinez, guitarist Carlos Arévalo, bassist Eduardo Arenas, and drummer Gabriel Villa channel the kinetic spirit of Los Angeles into a wildly shapeshifting sound, ultimately finding an unstoppable joy in following their most outrageous instincts.

In creating the follow-up to 2017’s Freedom Is Free, Chicano Batman again teamed up with Leon Michels—a producer/songwriter/musician who’s worked with The Carters, A$AP Rocky, and Lee Fields & the Expressions, and performed in such bands as Sharon Jones & The Dap-Kings. Though Martinez partly tracked his vocals at Diamond Mine Studios in Queens, much of the album came to life at Barefoot Studios: the legendary Hollywood spot where the likes of Parliament-Funkadelic and Stevie Wonder recorded in the ’70s. Mixed by Shawn Everett (Vampire Weekend, Alabama Shakes, Beck), the result is Chicano Batman’s most imaginative body of work yet, a collection of songs that could only come from their own idiosyncratic minds.

While Invisible People embodies elements of hip-hop—especially in its endless barrage of addictive hooks and hard-hitting beats—the album also mines inspiration from krautrock acts like Can and Neu! and the Nigerian synth-funk of William Onyeabor, along with genres as disparate as R&B and prog-rock. As the band expanded their sonic identity, Martinez made a point of matching the album’s dynamic sound by bringing more grit and attitude to his vocal delivery, as well as changing up his lyrical approach. “I used to have this preoccupation with trying to be super-poetic in my lyrics, and now I’m more focused on making it sure it flows and it moves, because that’s what’s going to make people really feel something,” says Martinez. “I feel like I was soul-searching on all these songs, but it’s just a different way of doing it.”

On the powerful title track to Invisible People, Martinez reveals his ability to draw tremendous impact from understated expression. Partly inspired by Ralph Ellison’s Invisible Man, the song unfolds with an emotionally raw vocal performance as its lyrics examine race as a scientific fallacy and explore the ideologies at the root of racism. “Because of where we’re from or where our parents are from, we’re still seen as second-class citizens in this country,” says Martinez. “Through our whole experience with touring we’ve felt the reality of racism in the South and the West and all over the place; it’s there within the hierarchy of race in the indie-rock world too.” Arenas adds: “It’s taking a stand on what we’re about and what we believe. We’re saying, ‘Your racism, your classism—it’s not getting to me. I don’t have to prove that you’re not better than me, because I can just play my music, and you can feel everything I’m trying to communicate.’”

Opening with the dreamy reverie of lead single “Color My Life,” Invisible People encompasses countless moods, often cycling through a whirlwind of emotions in one single track. On “The Way,” for instance, Martinez alternately telegraphs desperation and enlightenment as the band recklessly shifts tempos and textures, giving way to a dizzying epic Villa describes as “the classic Chicano Batman Frankenstein.” Although Martinez mostly threads the album with inward-looking lyrics, Invisible People also includes songs like “Manuel’s Story,” a gloriously chaotic piece ripped from real life. “I’d just gotten back from Panama, and my uncle had told me the story of how he ended up there,” says Martinez. “There was a drama that happened with a drug deal and he had to leave the country, and the song tells the story of exactly what he went through.” As Martinez’s play-by-play lyrics place the listener right in the thick of the action, “Manuel’s Story” rushes forward with a frenetic momentum that owes much to Arévalo’s genre-bending ingenuity. “I love prog rock and I always wanted to write a song that’s got this beat called the motorik beat,” he says. “I brought it to the guys and it was sort of a litmus test to see if they were down to go with a completely different vibe, and it ended up really working.”

In shaping the album’s kaleidoscopic palette, Chicano Batman purposely upended their writing process, a move spearheaded by Arévalo. “I used to always bring in songs I’d started on guitar, but for this one I pushed using keyboards and synths as the foundation for the songwriting, which changed the whole sound of everything,” he says. To make the most of their abundant creative energy, Chicano Batman also embraced total spontaneity in the studio, capturing and recording their ideas as they emerged. “One thing I learned with this record is to stay present and improvise with whatever comes up, instead of holding onto what you think a song’s supposed to be,” Arenas says. By way of example, he points to “Pink Elephant,” a fantastically warped serenade built on a guitar part he stumbled upon while working with Villa on an old demo. “The guitar became the main hook, and we just focused on that and didn’t worry about the rest,” he says. “You can’t get too attached to anything, otherwise the idea will move onto the next place.”

During the album-making process, Chicano Batman continually tapped into the ineffable magic of recording at Barefoot Studios. “There was definitely something happening with the fact that we were working in that studio, with all the amazing gear and acoustics,” says Villa. “You could really feel all the spirits in the room.” To that end, tracks like the playfully romantic “Blank Slate” proved particularly fun to record. “We were in this tiny room and that room thumped so hard,” says Arenas. “I knew that War had recorded ‘Low Rider’ there or something, and we got the rhythm to exactly where it needed to be—swinging and catchy but super-simple.”

As the band explains, creating such an eclectic album involved more than a few inharmonious moments. “It definitely wasn’t all agreement—there was a lot of kicking and screaming and going back and forth on ideas, pushing back against each other,” says Martinez. “But really, the fact that we’re all very different personalities is what makes this record what it was.” Echoing that sentiment, Arévalo notes that the experience flipped his perspective for the better. “For me that was the takeaway from the whole record: being able to accept everyone else’s opinions and their ideas on how they wanted to approach their specific parts,” he says. “We let each other express ourselves to the fullest potential, and we made something amazing together.”

Like all the most iconic music born from the West Coast, Chicano Batman’s Invisible People offers an instant escape into the beautifully strange world they inhabit. Throughout their fourth album, vocalist/keyboardist Bardo Martinez, guitarist Carlos Arévalo, bassist Eduardo Arenas, and drummer Gabriel Villa channel the kinetic spirit of their city into a wildly shapeshifting sound, ultimately finding an unstoppable joy in following their most outrageous instincts. Produced by Leon Michels (The Carters, A$AP Rocky, Lee Fields & the Expressions) and mixed by Shawn Everett (Vampire Weekend, Alabama Shakes, Beck), Invisible People taps into the unbridled creativity Chicano Batman previously brought to their 2009 self-titled debut, 2014’s Cycles Of Existential Rhyme, and 2017’s Freedom Is Free (their first release since signing to ATO Records). But as evidenced on songs like lead single “Color My Life” and on the album’s emotionally raw title track (whose lyrics examine race as a scientific fallacy), Invisible People embodies elements of everything from krautrock to hip-hop—all while capturing the powerful energy the band’s shown in touring with artists like Alabama Shakes, Portugal The Man, and Jack White. The result is Chicano Batman’s most imaginative body of work yet, a collection of songs that could only come from their own idiosyncratic minds.