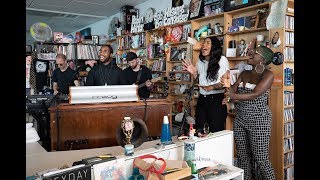 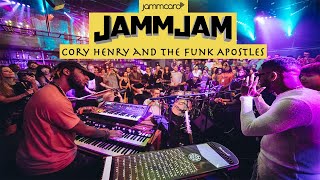 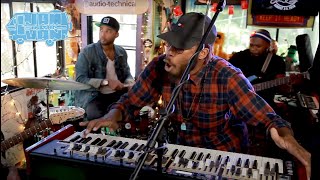 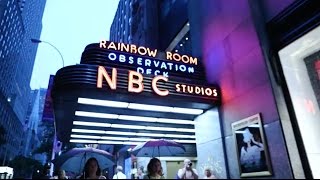 Cory Henry on The Tonight Show with Jimmy Fallon 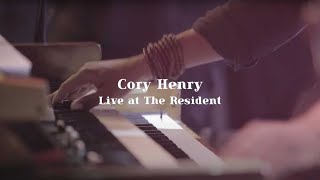 "Testify" [Live in LA] - Cory Henry and The Funk Apostles Cory Henry’s New Album ‘Something To Say’ Out Now

While the world hit pause at the quarter way mark of 2020, Soul singer/songwriter/musician Cory Henry, who was scheduled to be on a world tour with Lenny Kravitz, turned inward, reflecting on moments in his own life and voicing them within his music. His upcoming project Something To Say is a culmination of that, as Cory has built a solid foundation of making music that people can feel.

Growing up in Brooklyn, New York, Cory Henry’s childhood existed within the pages of sheet music. “I always took an interest in music,” he fondly recalls. His mother was a multi-instrumentalist, playing the keys, organ, drums, saxophone, and bass, along with being the lead choir director at their local Pentecostal church. When Cory was just two, his mother was preparing for choir rehearsal and was practicing notes on the organ, to which he followed suit. “I played the notes right behind her,” he says. Recognizing her son’s innate ability, she sat him down at the organ and they played together. Their first song was “Amazing Grace.” By three, Cory was prolifically playing the organ at church to a pleasantly stunned congregation. Pentecostal masses on Sundays run in excess of six hours, with even weekday meetings for Bible study and choir practice. Cory was in the middle of all of it, providing the soundtrack. “Sunday was like my full-time job at the age of 5 years old,” he says with a laugh, as during the week he learned music for five different choirs, ranging from children to adult. By six, he was performing at the famed Apollo Theater. “My family strapped up the organ, put it in the van and drove it up to Harlem,” he remembers. It was clear that a star was being born. “I remember one of the ministers at the church asked if when I grew up I would play for the church or the world,” he adds. “ I yelled, ‘the world!’ Something about ‘the world’ sounded right to me.” He foreshadowed his own fate. Once he reached high school, Cory would sneak into the back of New York’s rising star venue the Village Underground to watch performances and experience a new kind of live music. “They really had me coming back because I never saw an organ outside of church before,” he explains. When a spot opened as the organist at the venue, the job was given to Cory. Celebrities were always showing up to scope out new talent, and one fortuitous evening, veteran Jazz musician Kenny Garrett took notice of Cory’s skills. He later brought him on tour with him for years.

“People started seeing I was a working musician,” he says, “so I started getting calls.” More performances and tours filtered in, from Bruce Springsteen, to the Roots, Kirk Franklin and many others. In 2013 Cory joined the Grammy Award-winning ensemble Snarky Puppy where he co-wrote and performed keys on the band’s viral video sensation, “Lingus (We Like it Here)”. Later that next year, Cory released his first solo project First Steps which reached the Top 5 of Billboard’s Jazz Albums chart and gospel/jazz fusion album The Revival in 2016 featuring drummer and longtime collaborator, TaRon Lockett. That same year he formed what would become a global touring phenomenon, Cory Henry and The Funk Apostles. With performances in well over fifty countries, Cory has shared the stage with Ms. Lauryn Hill, Vulfpeck, Jacob Collier and after solidifying a close relationship with none other than Quincy Jones, Cory headlined Quincy’s living legend’s “Soundtrack of America” series and performed beside him at the Montreux Jazz Festival.  In 2018 Cory Henry and The Funk Apostles the released their first album Art of Love with praise from the New York Times and Billboard and earned him a performance feature on the coveted NPR Tiny Desk Concert Series.

The stage is now set for Something To Say. Once Cory Henry aligned with The Funk Apostles and other contributors, his music arguably changed forms, moving closer into a ‘70s Soul music direction. “I think that’s the greatest era of music,” he adds, citing inspirations like Stevie Wonder, Marvin Gaye, Donny Hathaway, P-Funk, and James Brown. Something To Say, which is solely produced by Cory and features him on Vocals, Hammond B3, Moog and Harpejji, a rare electric stringed instrument that he has become the best in the world on, travels along that vein, with a sound that Cory’s christened as “Future Soul.” He tackles subjects like love, breakups, social consciousness, injustices, and the effects of being emotionally drained. The album title came from his harboring feelings that needed to come out. “It was so much that I felt like it was wrapping me up like, ‘Yeah, I’ve got something to say too,’” he expresses.

While the songs will have new and returning Cory Henry fans eagerly tuned in, his main mission is to bring people together with his music. “Music is a universal language,” he says. “I’ve traveled to so many different countries where we did not speak the same language, but they identified with the sounds and it made people happy. I get instant gratification out of making people happy.”