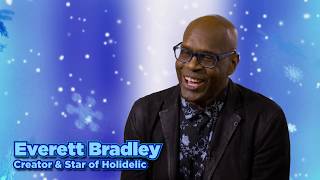 Perhaps the story of Everett Bradley’s unique career can be summed up in three words—“Look no further!” That’s what Shawn Pelton, the long-time Saturday Night Live drummer, always tells people whenever he recommends his old bandmate Everett for a gig as a percussionist. Shawn and Everett had been students together back at Indiana University’s Jacobs School of Music, and while Shawn knows Everett as a kick-ass percussionist with few peers, he also knows that conga drums are but one talent up the sleeve of this singer, songwriter, dancer, choreographer, multi-instrumentalist, and bandleader. The cliché “jack-of-all-trades-but-master-of-none” simply does not apply to Everett Bradley because he happens to be a master of them all. Among those who’ve heeded Pelton’s advice and have come to treasure Everett are Carly Simon, Daryl Hall and Jon Bon Jovi. On top of everything else, he has an infectious personality—a quality always on display in Holidelic, the outlandishly entertaining Christmas funk extravaganza he created and performs in. These are only some of the gifts that have brought Everett to Broadway, television, and into Bruce Springsteen’s E Street Band—and what makes his prospects so exciting.

Born in Greenwood, South Carolina, Everett grew up in Muncie, Indiana, the son of a high school principal and football coach who insisted he play football (his brother Luther played on the Detroit Lions) and tried to discourage his musical interests, and a mother who taught first grade and encouraged them behind his father’s back. This central conflict in his upbringing would teach him important lessons—“about love, compassion, generosity, not being too quick to judge people, and how not to take no for an answer if you felt very strongly about something,” as Everett explains it. He played the lead role of Jesus in a high school production of Godspell, a watershed event made even more remarkable by the fact that the Bradleys were one of three black families in the overwhelmingly white neighborhood of  Halteman Village. The die was cast for a career in music when he received a scholarship to study voice at Indiana University. After graduating, Everett cut his teeth playing in a funk band called Kilo with fellow student Shawn Pelton. Weaned on Stax, Motown, Sly and the Family Stone, and the funk of Earth Wind & Fire and Parliament Funkadelic, Everett played multiple instruments including saxophone, but conga drums became his mainstay. By the time he landed in New York and got a call about a show called Stomp that had originated in the UK and was looking for “percussionists that move well,” he’d become a consummate player, and boy, had they called the right guy--the show was tailor-made for him. “It was one of those situations where the more personality you inject, the better the show becomes. I just took it and ran with it!”

Stomp became an off-Broadway phenomenon, and when the UK cast went on tour, Everett was made its musical director, after which he found himself auditioning for a Broadway show about jitterbugging called Swing! He made his Broadway debut with a song he’d written himself for the show, “Throw That Girl Around,” and contributed a hip-hop arrangement of “The Boogie Woogie Bugle Boy” that turned the production on its ear. Then came a stint with Hall & Oats, and then came 9/11. “I felt like we all needed to heal, and the way I was going to do that was by writing Christmas songs”—which led to the album Toy. “Then I got the idea to combine two of my favorite things—Christmas and funk!” The result was an audaciously entertaining P-Funk inspired version of Toy called Holidelic. From the moment Everett arrived onstage in his big furry white coat and George Clintonesque sunglasses and unwraps the big gift with the bow, opens the box, takes out the 6-inch platform shoes and puts them on, the audience went wild. Everett has been performing the show ever since, making it as beloved a holiday tradition as the Rockettes at Radio City for those who know about it. “It’s joyful but nasty--bump and grind with a warm fuzzy heart!”

With the new millennium, Everett was busier than ever, playing with Hall & Oates, Carly Simon, and performing in Bobby McFerrin’s completely improvised show Voicestra as one of the twelve singers, which blew his mind—”It was amazing to see someone create magic out of nothing every night.” In 2011 he got a mysterious call to do a gig down the Jersey shore at the Stone Pony and arrived to discover that it was a fund-raiser that Bruce Springsteen was doing. “I’d never been so nervous in my life,” Everett admits. Bruce had never played with a percussionist before, but he liked what he saw—in no time at all they were vamping, doing steps with their arms around each other. Everett was just getting ready to tour Japan with Darryl Hall when he got the invitation to join the E Street Band. “It would be fun for Bruce to have somebody up there to mess with,” he was told by Bruce’s management, but as much as Everett wanted to be messed with, he had a commitment to Darryl that he felt he couldn’t break and turned the invitation down. As it turned out, Bruce was so impressed by Everett’s loyalty to Darryl that he decided to wait for him. The result was two of the most extraordinary years of Everett’s life as he toured the world with Bruce and played on his album High Hopes.

The years since have been equally as eventful. Everett became the musical director for Meredith Viera’s television show. He continued to work with Darryl Hall and played an integral role in the evolution of Live From Darryl’s House. In the wake of Richie Sambora’s departure, Jon Bon Jovi invited him to play in his band, which turned into a four year stint—“my longest gig by far.” But as interesting as Everett’s career has been, it’s what he’s doing now and his vision of the road ahead that gets him stoked. He’s re-imagining the music of the classic musical 42nd Street, turning it into an urban R&B/jazz score. He’s flipping the Great American Songbook into another kind of repertoire: Cole Porter’s “Night and Day” as Marvin Gaye would have done it in the 70s. He’s become passionately interested in film scoring—“I want to learn how to write for oboe and I’m actually thinking about going back to school.” And with the holidays approaching his thoughts naturally turn to Holidelic. “I can’t wait to wear a cape again! There are so many ways to go with this, so many other holidays…Halloween? St. Valentine’s Day? Independence Day??”

Whatever Everett Bradley may turn his attention to, if you’re looking for something fun, interesting, heartfelt, and unpredictable, look no further…