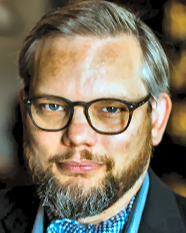 Fred Minnick To Host Blind Bourbon Live In Washington D.C. For The Uso On November 10

Bourbon Community Comes Together For Kentucky Ahead Of Bourbon Heritage Month

Since returning home from Iraq as a war veteran in 2005, Fred Minnick has become one of the most dynamic media personalities in the United States, sharing his expertise on spirits with mainstream audiences. He has authored seven books and become a specialized celebrity, appearing on Bravo’s Top Chef and Discovery’s Moonshiners, as well as hosting Amazon Prime’s Bourbon Up and Spirits Network’s Frontier Filmmakers and The Curation Desk. He is also the co-creator and curator of the Bourbon & Beyond Music festival (91,000 attendees in 2019), which has featured Zac Brown Band, Lenny Kravitz, John Mayer, Robert Plant and many other great musical acts.

As a leader on social media with over 100,000 social media followers, Minnick reaches more than 15 million monthly listeners on all platforms, including DASH Radio’s Minnick Minute, and is heard in 80 countries. The Fred Minnick Show is a top rated podcast with over 100 livestream productions that have earned placings including Top 20 Food, Top 15 Music Interviews, and Top Food Podcast-The Spirits Business. Minnick is founder and curator of the Repeal Day Expo, produced entirely in a virtual world.

Additionally, Fred has appeared in The Atlantic, CBS This Morning, Celebrity Access, Fox and Friends, The New York Times, Rolling Stone, and Today, as well as on BBC, NPR and The Travel Channel and many others. Over the past decade Minnick has appeared in the media more than 1,000 times. Minnick is recognized for his research credentials by Filson Historical Society, National Library of Ireland, and The Public Record Office of Northern Ireland.

Minnick is senior contributor on spirits for Forbes, founding and former editor-in-chief of Bourbon+ Magazine, and frequently contributes to Whiskey Magazine, Whiskey Auctioneer, and Saveur Magazine. He has written for Parade Magazine, The New York Times, Scientific American, Wine Enthusiast, Wine Spectator, and is the former lead American Whiskey critic for Whisky Advocate.

The cross section on bourbon as a lifestyle culture packages all Minnick has done before, giving him a platform to pour over spirits, toast, and make the world a better place one drink at a time.