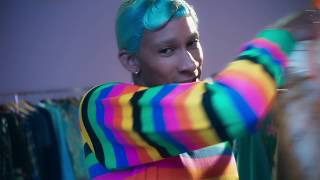 At the forefront of queer Hollywood and representation, Australian Actor and singer-song writer, Keiynan Lonsdale has quickly made a name for himself as a multi-hyphenate talent, starring in major motion pictures, television series and releasing his own original music. In 2018, Lonsdale’s bold and honest performance in “Love, Simon” broke down barriers and inspired audiences across the globe. The role won him an MTV Movie award and led Lonsdale to give a striking televised acceptance speech on LGBT rights. After wrapping production on “Love, Simon,” Lonsdale publicly came out on Instagram which made headlines globally and allowed him to be more authentic and honest in his work, on social media and in the public eye.

That same year he went on to win “Actor of the Year” from GQ Australia and later received an LGBT Centre Youth Advocacy Award. Alongside Nick Robinson, Lonsdale also won an MTV TV Award for “Best Kiss” and is one of the first openly queer actors to play a superhero. Lonsdale has made a large footprint in the fashion realm– making his Paris Fashion Week runway debut for Louis Vuitton and Off White and gracing the 2019 MET Gala pink carpet in a custom gown covered in 1,500 handmade and embroidered butterflies. In 2019, Lonsdale released his new single and music video for “Rainbow Dragon,” a dynamic pop anthem that showcases his powerful vocals. The single has the inspirational theme of shamelessly being your vibrant colorful self; if (he) can slay, you can slay too, while boldly discussing his exit from the hit CW show, “The Flash” to focus on his music full-time.“Rainbow Dragon” is set to appear on Lonsdale’s upcoming 14-track debut album ‘Rainbow Boy’ (release date TBA) which illustrates Lonsdale’s exploration of self-love and discovery.

With an already impressive career, Lonsdale has been able to transcend into an even greater entertainer and role model. He has built a growing loyal fan base which has created a powerful platform for him to debut his music. Lonsdale continues to push the boundaries on what it means to be a leading man in Hollywood and an influential voice to his generation and the LGBTQ+ community. With a cinematic vision and powerful voice, the future is looking very bright for this multi-talented force.