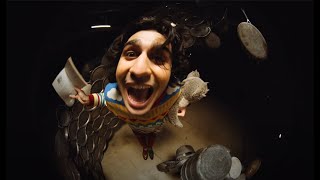 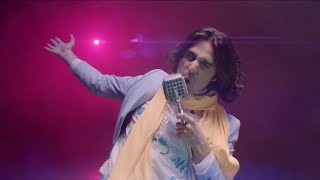 “on some bullshit” (single)

19-year-old rapper, singer, songwriter and producer KOAD has been making music in his parent’s garage in their home in the San Fernando Valley on a beat pad he got for christmas since 2013 and in 2021 he will embark on a new journey as he releases “pots n’ pans” as the first creative project from
KOGO, his community centered art collective and label. KOAD is an uncontainable and frenetic creative force with ideas and energy seeping at his seams that latch onto any and all mediums that he comes across. Not only does his creativity manifest itself in his music, but also in the lyrics he scribbles on paper plates, in his partner and pet stuffed animal koala named Benjamin and the merch line he’s built around him, in his parents’ garage turned make-shift studio space filled with paintings he’s done, song titles scribbled effortlessly on the whiteboard, and moodboards with visual references ranging from Jim Carrey’s The Mask to Captain Underpants children’s books that fill the walls. In his music, his go-to outlet for his creativity, his unparalleled ability to propel narratives with his undeniably captivating production and songwriting that's so uniquely his own has allowed him to inject pieces of himself into his work that make the two inseparable. KOAD is not just a person or creative, but an entire immersive and evolving world that you can live in, consume, and seek to understand.

His debut song, “pots n’ pans” is the first leap into his exploratory upcoming mixtape. The single is a raucous and raunchy salvo produced by Grammy winner Rahki (Kendrick Lamar, Eminem) with additional songwriting from KUČKA (ASAP Rocky, Flume), both of whom’s musical perspectives proved
invaluable to KOAD’s creative process. The entire ethos of the song revolves around the concept of play and making noise - KOAD’s interpretation and choice of representation of childhood and youth.

Born in Northridge, California, KOAD was raised by Indian parents, his father an immigrant who became a financial controller in the U.S., his mother a second-gen native of Virginia, works as an event coordinator. Always outgoing, he discovered his penchant for over-the-top speech making when he ran for school president in fourth grade, going on to hone his voice in middle school debate club. His musical journey began at thirteen with a beat-pad, using YouTube to learn production and immerse himself in the musical worlds of passionate and creative artists, from James Brown to Bruce Springsteen, Tyler the Creator to Kendrick Lamar.
While playing basketball and dabbling in extracurriculars in high school, KOAD primarily devoted most of his sophomore year onwards to writing, recording and performing, including the recent self-made and directed dance-oriented video “Come and Goes,” which will be re-released this year. His stories have always remained highly personal and evocative: from the homogenous and often oppressive suburbs, to teenage love, to the search for true friends and meaningful community. In August 2018, KOAD was
profiled by the Los Angeles Times’ student-driven platform, High School Insider, which recognized his creative approach and ambition: “Constantly experimenting with different genres, KOAD appreciates the process of…telling each story with a unique sound.”

Meticulously crafting every aspect as a songwriter and producer, KOAD also enjoys the simple pleasure of making people feel good and getting them to dance. Raised in a Hindu family, he says that the experience of going through Catholic middle and high schools “shaped how I look at the world as an Indian kid from the San Fernando Valley.” Hip hop, he explains, is all about perspective, and he hopes that his personal stories will impact broad audiences and pull them into immersive, and irresistible, worlds.