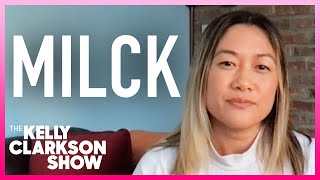 Activist & Singer MILCK On Being An Advocate For The Asian Community 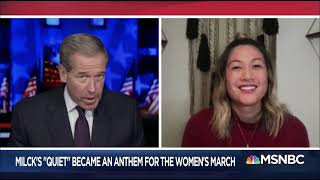 Advocate, Singer-Songwriter & Producer MILCK Takes “Power” into Her Own Hands with New Single

MILCK is a singer, songwriter, producer, and advocate who has been an impactful voice in the advancement of human rights since the well-known 2017 viral performance of her song "Quiet" during the Women's March. “Quiet” became the unofficial anthem of the movement, was named Billboard’s No.1 Protest Song, and was selected for NPR’s American Anthem Series. The City of Los Angeles featured MILCK as a leader in positive change and influence for the AAPI Community in their Together We Speak Exhibit.

In 2020, MILCK’s single “Somebody’s Beloved” came out during the Black Lives Matter protests and chronicles the life-shattering effects of systemic racism in America. MILCK was then invited to participate in The Kellogg Foundation’s National Day of Racial Healing and performed a powerful duet of “Somebody’s Beloved” with acclaimed poet Amanda Gorman.

Following the song’s release, MILCK established The Somebody’s Beloved Fund, to use her music to generate resources for ten grassroots beneficiaries that build power around racial justice, feminism, LGBTQIA+ rights, criminal justice reform and mental health. She has pledged for every song on her upcoming album to benefit The Somebody’s Beloved Fund.

Her 2021 song “I Belong” was written to honor the AAPI community in the wake of the Atlanta shootings that took six Asian women’s lives. That moment was a breaking point for MILCK where she realized that a revolution towards a more tolerant world was dependent on declaring: We are American enough NOW. We belong here. NOW.

The song debuted as part of the “See Us Unite for Change” television special that aired globally last May on MTV to bring more tolerance and safety for the AAPI community. The following month, MILCK performed an acoustic rendition of "I Belong" for the "Uplifting AAPI Voices: A TIME Summit."

Recently, Netflix released the original documentary "FOUND," for which Broadway actress Phillipa Soo (“Hamilton”) and MILCK co-wrote and sang the theme song "Mystery of Me." The documentary follows three adopted American teenage girls who discover that they are blood-related cousins. Their online meeting inspires the young women to embark on a once-in-a-lifetime journey to China together in search of their heritage. It's a story that resonates closely with MILCK as an active voice of the AAPI community.

MILCK has performed for Time Magazine’s Voices of the Future summit, was named one of BlogHer’s Social Impact Honorees at the VOTY100 and was a mentor for The Wrap’s BE Conference talking about the intersection of music and social justice. Her latest single “Steady as We Go” launched as part of OWN: The Oprah Winfrey Network’s primetime special highlighting women around the globe who are impacting change in their communities. Other songs of MILCK's have been placed on TV shows, major network trailers, and national commercial campaigns. The Planned Parenthood Champion of Choice Award recipient also finds tremendous joy in writing and producing emotional and anthemic songs for other artists, such as John Legend.  MILCK’s new full-length album arrives later this year.