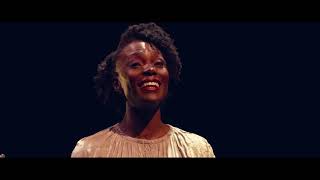 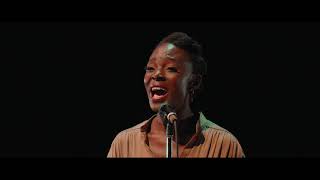 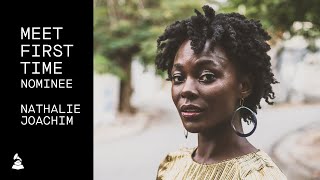 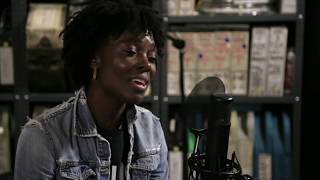 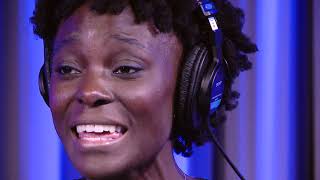 Nathalie Joachim is a Grammy-nominated flutist, composer, and vocalist. The Brooklyn born Haitian-American artist is hailed for being “a fresh and invigorating cross-cultural voice”. (The Nation). She is co-founder of the critically acclaimed urban art pop duo, Flutronix, and flutist of the contemporary chamber ensemble Eighth Blackbird. Joachim comfortably navigates everything from classical to indie-rock, all while advocating for social change and cultural awareness. Her authenticity has gained her the reputation of being “powerful and unpretentious.” (The New York Times)

Other recent projects include Land Bridge, an evening-length score for Helen Simoneau Danse funded by New Music USA; Dam Mwen Yo for solo cello and processed field recordings written for Amanda Gookin of PUBLIQuartet as part of her Forward Music Project, and is featured in a TEDX Talk;  and Ulysses in 3, a collaboration with renowned jazz drummer Ulysses Owens, Jr. as part of Park Avenue Armory’s Under Construction residency program. Joachim’s original compositions have been broadcast on NPR, WNYC, WQXR, Q2, J-Wave, Tokyo FM, FM Yokohama and more. In addition, she has been featured in television segments on SNL, Late Show with David Letterman, Telemundo, BK Live and The Daily Buzz, as well as an internationally broadcast ESPN super bowl commercial.

Ms. Joachim is an official Burkart Flutes & Piccolos artist, and has appeared as a concert soloist both in recital and with orchestra on stages throughout the United States, Europe and Japan, where she is represented by Village Again Records. Highlights include featured performances at the Newport Jazz Festival, Carnegie Hall, the Brooklyn Museum, Fukuoka Symphony Hall, National Flute Association Conventions, Gezmataz Genoa Jazz Festival, Symphony Space, Biwako Hall, Virginia Arts Festival, and WNYC’s Greenespace among others.

She is an active educator of students of all ages and skill levels. Ms. Joachim is Director of Contemporary Chamber Music at the Perlman Music Program; is a guest teaching artist for The Juilliard-Nord Anglia Performing Arts Programme; and holds faculty positions at the Bang on a Can Summer Festival and Banff Centre for Arts and Creativity. She is a former flute faculty member at The Juilliard School’s Music Advancement Program, and has coached chamber music for The Juilliard School’s Pre-College Division. Her youth education workshops, presented internationally with Flutronix, focus on creative collaboration and the use of traditional instruments in modern ways including improvisation, extended techniques and the integration of technology. At the university level, she has been presented as a music career lecturer and panelist, and has led masterclasses for The Juilliard School, University of Michigan, University of North Carolina School for the Arts, University of North Carolina Greensboro, University of the Arts, New York Flute Club, New England Conservatory, University of Wisconsin-Madison, and many other institutions across the country.

Joachim is a graduate of The Juilliard School, and was the first person to successfully complete the conservatory’s MAP, Pre-College, and College Division programs. Upon graduation, she was granted the first ever Juilliard InterArts Award for independently producing and presenting exceptional interdisciplinary arts performances involving music, dance, theater and technology while pursuing her degree. She continued her graduate degree studies at The New School, where her focus was audio production and sound design.