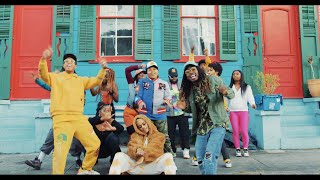 Since he came on the scene in 2014, Pell’s been synonymous with ambition. His first mixtape, Floating While Dreaming, captured the spirit of dreaming big and wanting more. Featuring production from Ludwig Goransson (Childish Gambino) and others, Floating While Dreaming announced the arrival of a thoughtful, multifaceted Nola talent. Pell can cut a party record in the tradition of Cash Money and also tap into the city’s R&B scene for a mellow slow jam with all live instrumentation.

Pell’s latest venture? Rebuilding his strong and vibrant hometown with GLBL WRMNG - a new hyper-local NOLA collective of 20+ local artists and producers including Malik NinetyFive, Jzzle, Jelly of Tank and the Bangas, Lil Iceberg, Kr3wcial, and more. On February 19th, GLBL WRMNG will release glbl wrmng vol. 1, an ode to the strength and resilience of their beloved hometown and emphasizes the city’s heroic survival.

“I wanted to make records with all my hometown friends that didn’t have to be just Pell records that could showcase the talent of New Orleans and what we had to offer,” Pell says. “I wanted to executively produce this record and then give us all something to call back on whenever we were on the road or outside of the city so that we could keep connecting and building together.

The R&B side of the city is a fundamental part of glbl wrmng vol. 1, which has been gestating for years. The album aims to capture the beauty, vibrancy, and, most importantly, resiliency of New Orleans—a city that can attest to the harsh realities of climate change—while simultaneously showcasing the artists and producers who are reinventing the city’s sound. It features over 15 different collaborators, fulfilling Pell’s desire to create a platform for a side of the city he says isn’t represented in contemporary hip-hop. “Oftentimes New Orleans is pegged as this murder capital,” he says. “But on a day to day basis, we show each other so much love and this project embodies that.” While many of the collaborators are close friends of Pell’s, some are folks he’s only known for a year or less—but it doesn’t matter, because sharing the spotlight is the point.

The lead single “504” is an instant anthem that encapsulates the project’s mission perfectly. Joined by Kr3wcial and $leazey EZ, Pell intertwined his own success and drive with the indomitable strength of his hometown, telling all the naysayers that this song will soundtrack their second line. The song rides out with live horns joining the beat, a blend that reflects the rich musical history of New Orleans.

Anchored by live bass, “What Is Love” is another stand-out. The moody duet with Jelly describes a relationship fueled by lust but falling short of commitment. In just two brief minutes it leaves a mark, and acts as a necessary balance to the uproarious parts of the album. Glbl wrmng vol. 1, just the first entry in what will hopefully be a long series, delivers the richness of New Orleans in 16 tracks, shading in every color and emotion that makes the city one of the world’s gems.