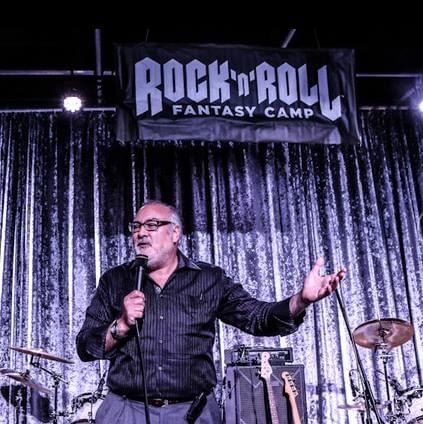 A camper asks a question to Nils Lofgren (guitarist -- E Street Band) and Roger Daltrey (lead singer -- The Who).

Campers perform live on stage with Paul Stanley of Kiss 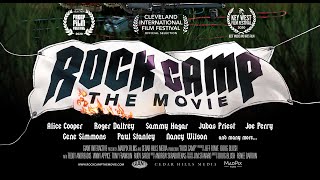 Rock and Roll Fantasy Camp was born out of the desire to give the public the experience of living the life of a Rock Star, with Rock Stars, for a few days, and gaining their knowledge along the way.  Since 1996, Rock ‘n’ Roll Fantasy Camp (RRFC) has made music dreams come true. RRFC brings people together from all walks of life for an unforgettable experience with legendary rock stars such as Roger Daltrey, Alice Cooper, Paul Stanley, Steven Tyler, Slash, and many more. These musicians teach, inspire, and jam with the campers over four days, concluding a live performance at a famous venue. The RRFC experience takes music lovers from spectator to the stage, sharing the limelight with their musical heroes.

In June 2020, with no live music due to COVID, Rock 'n' Roll Fantasy Camp launched an exclusive nightly interactive masterclass series where people learn directly from the masters. With people worldwide not going out, RRFC brings musicians into the comfort of people's homes. Unlike typical meet and greets, people hang for 60-90 minutes with their favorite stars, hear intimate stories, and get personalized advice. The reviews, demand, and excitement of masterclasses have determined this will be an ongoing series that long after COVID.

Rock ‘n’ Roll Fantasy Camp is the brainchild of music producer, and former sports agent David Fishof. Britt Lightning is the host and co-producer of the Rock' n' Roll Fantasy Camp Masterclasses. She is the current lead guitarist in Vixen.

Whether he’s producing a tour, assembling an All-Starr band, or writing a best-selling book, there’s one thing David Fishof is always doing, and that’s dreaming. Hailed as one of the most creative and innovative entertainment producers in the world, David has been responsible for some of the most original, successful and exciting live shows ever brought to the stage. However of all the shows he’s put on over his 40 year+ career, there’s one production that stands out from all the rest: Rock and Roll Fantasy Camp.

After years of good fortune working with the likes of veteran rockers like Roger Daltrey, Ringo Starr, The Monkees, Levon Helm, Joe Walsh, Jack Bruce and Peter Frampton, David decided it was time to share his experiences with rock fans around the world. With the help of some of the musical legends he had worked with over the years, David created Rock and Roll Fantasy Camp, a place where rock dreams come true. Rockcamp.com

In January 2021 Giant Films will release from Academy award winner film- maker Doug Blush a Documentary film entitled “Rock Camp” about the 25 years of the Rock and Roll Fantasy Camp featuring interviews from Rock Stars and Campers of their experiences.

.  Due to the current live music situation David has successfully launch the Rock Camp Master Class program nightly since June 2020 on zoom and Ticketmaster. The classes featuring talent i.e. Alice Cooper, Steve Gadd, Sebastian Back to Steve Howe and over 100 of todays top touring Rocker has been selling out nightly. Check out the list of featured artists.

The Rock Camps are planning to resume in 2021 featuring Scorpions Band member Rudolf Schenker and Mathius Jabs and many more camps in Las Vegas, New York, Los Angeles and all around the globe.

David’s career has also spanned the sports world as well. He has represented legends such as NFL greats Phil Simms, Mark Bavaro, Vince Ferragamo, and Jack Reynolds as well as baseball stars Lou Piniella, Dave Magadan and Randy Myers. David also authored the best-selling book Putting It On The Line about sports and entertainment.

David second book Rock Your Business was an Amazon best seller. He was a featured speaker at the National Speakers Association. David resides in los Angeles and is the proud father of five, grandfather of seven and husband of Karen Finkel.

In addition to playing with Vixen, Britt played guitar for Rachel Platten, performing the hit "Fight Song" on Good Morning America, The Today Show, and many more national television shows, along with countless music festivals in 2015- 2016. Britt played with multi Grammy Award-winning artist Alejandro Sanz in a sold out stadium world tour from 2012-2015. Throughout her career, Britt has performed and recorded with various other rock and pop artists and in an off-Broadway musical. Britt started playing guitar in Boston-based Jaded; her all-female hard rock band released two albums.