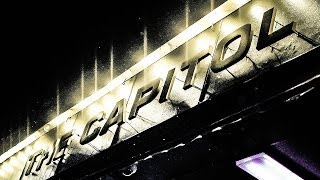 RWE Partners And Dayglo Presents The Capitol Sessions: Songs From A Rock Palace That Impacted The World An All-Star Jam To Benefit Headcount

"John Mulaney: From Scratch" Kicks Off The Capitol Theatre's First Shows Back In 16 Months - August 10 & 11

Designed by celebrated architect Thomas Lamb in 1926 and listed in The National Register of Historic Places, the Capitol is located 30 miles from NYC, accessible by I-95 and only one block from the Port Chester Metro North train station. The 2,000-capacity theater, known as “the original rock palace,’ showcased rock legends such as Black Sabbath, Chuck Berry, David Bowie, Derek and the Dominos, Janis Joplin, Pink Floyd, and The Rolling Stones. Jerry Garcia once called it his favorite venue, claiming “See, there’s only two theaters, man… that are set up pretty groovy all around for music and for smooth stage changes, good lighting and all that – the Fillmore and The Capitol Theatre. And those are the only two in the whole country.”

In 2012, the Capitol Theatre underwent a transformative renovation under the guidance of entrepreneur Peter Shapiro (Brooklyn Bowl, Lockn' Festival, the "Fare Thee Well" Grateful Dead 50th Anniversary stadium shows, music magazine Relix, FANS). Since then, The Capitol has hosted many of music’s most prominent performers including Bob Dylan, Phil Lesh, Ringo Starr, Ryan Adams, Skrillex, Snoop Dogg, The Strokes, Tom Petty, Willie Nelson, and many more. The Capitol has also welcomed comedians likeKevin Hart and Amy Schumer. The New York Times raves: “A rock theater that looks and sounds as good as the Capitol is something to celebrate." Billboard agrees: “The lavishly decorated theater -- filled with mirrors, chandeliers and painstakingly restored detail -- looks absolutely stunning, and sounds even better."

Emily Schmalholz is the Director of Special Events for the legendary Capitol Theatre in Westchester, NY and its inner sanctum bar Garcia’s. Her love of music took root during her time at Emerson College, where she studied mass communications and worked at the radio station. She went on to spend seven years as a television producer at VH1, where she continued to develop her love for live music. This passion was honed through her independent event planning company Life of the Party Productions, Grand Prix New York and the New York Botanical Garden, where Schmalholz helmed their winter events. Eventually offered the chance to test her skills at The Capitol Theatre, a combination of her love of live music and curating special event experiences, it couldn’t have been a more natural fit for this jack-of-all-trades.

Schmalholz, a born-and-raised New Yorker, now resides in Armonk, New York near The Capitol Theatre with her husband and two sons. She comes from a showbiz family, with her mother working in theatre and the arts most of her life, and continues her legacy with her work at The Cap. Schmalholz has produced some of The Capitol Theatre’s largest private events and has partnered with charities like Big Brother, Big Sister and important corporations like Netflix on tailor-made events that reflect her work philosophy: love what you do, be passionate, and listen to every detail.

General Manager of the Capitol Theatre and 30-year music industry veteran Bruce Wheeler began working at the Cap in 2017, after spending five years at Central Park SummerStage in NYC. He spent 15 years as an independent, international Tour Manager, Production Manager and FOH Audio Engineer, working with Cage the Elephant, Jimmy Fallon, Bruce Hornsby, Rufus Wainwright, Regina Spektor, Fountains of Wayne, Josh Groban and many others in clubs, theaters, arenas and

festivals all over the world. He also spent 10 years in marketing and artist development executive roles at Caroline Records, MCA Records and J Records, as well as music industry relations with early online music site ARTISTdirect. Wheeler studied Entertainment Marketing at NYU - along with graduating from The Culinary Institute of America - and has also participated as a panelist and moderator for discussions at SXSW, New Music Seminar, CMJ & Digital Music Forum. He lives with his wife Rosita in West New York, NJ.