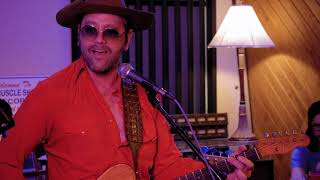 Listen To The Blood

The Kernal Talks Marriage, Mid-Life Crises and Marijuana Sold by Walmart While Searching for Closure on New Album Listen To The Blood (January 14 / Single Lock Records)

It all started with a red polyester suit. The western-style outfit belonged to Joe Garner's father Charlie, who played bass on the Grand Ole Opry for thirty years, famously backing 'doodle-doo-doo' star Del Reeves. After his dad passed, Joe went into the attic of his family home, looking for a keepsake. What he found was an alter ego and the beginning of a rich, cathartic ten-year musical journey that culminates with his latest release, Listen to the Blood.

“I thought, I'm going to put this old suit on and I'm going to be my own version of some of these country guys, like my dad and Del,” says Garner.  “That's how the project began. I thought of the name The Kernal in terms of 'kerning,' as in getting the letters straight in a design. Aligning myself is kind of the idea behind the name. I obviously had the love of country music that I got from my dad. But there were definitely some loose ends in our relationship that weren't tied before he died. That part of it drove me to put myself into this world and try to iron out some demons. Listen to the Blood is the last of a three-album arc, which has been about me trying to prove myself worthy in some ways in a game that my dad had ostensibly mastered.”

With a storyteller's eye and sly sense of humor that echoes not only his “honorary uncle” Del Reeves, but Tom T. Hall and Roger Miller, Garner delves deep into everything from family dysfunction to road trips to matters of the heart. The music, which he describes with a laugh as “diet country,” embodies the spirit of that genre without any of the slavishness or self-seriousness of much modern Americana. Rolling Stone has called his style “sweetly subversive, intellectual and addictive,” while Lo-Down said “the songs have an air of nostalgia but they sound far from old - modern, yet timeless. ”

From the joyous, southern-fried grooves of “U Do U” and “Pistol in the Pillow” through the revved-up rockabilly stomp of “Green Green Sky” and the cinematic travelogue of “Wrong Turn to Tupelo” to “The Fight Song,” a sparkling '80s style duet with Caitlin Rose, it's a nine-song sequence that showcases Garner's warm, confidential voice while managing to make profound connections with the head, heart and feet.

“I think a lot of people can probably relate to the ideas I've been exploring,” Garner says. “Even if you come from a good family, you inherit these negative qualities that your parents hand down to you And then they die, and here you are, left dealing with them. I've enjoyed The Kernal project, because it reminds me of the good things in my family and the ways that I'm able to conquer some of the negative aspects.  That part is sometimes hard to communicate, and I'm not even sure people are interested in that. Otherwise, the album can be appreciated in a pretty straightforward way - let's play some music and have a good time.”

Though he grew up around the Opry, Garner's tastes ran wider than country. “I studied poetry and creative writing,” he says. “I got into all that before I even started writing songs. So there was a certain standard set, with the possibilities of what a lyric could do. It's cliché, but I remember hearing Bob Dylan's lyrics for the first time, on Highway 61 Revisited, and just being in awe of how he could turn phrases. I became fascinated by how you could attach the rhythm of your words to a melody.”

Well, hell, I started out as somebody else

Bulldozed by some bygone dreams and left with just myself

From college onto Carharts to hardly even getting on base

Man, they’ll cram you all together till the roads are called a city street

Listen to the Blood, like The Kernal's previous album Light Country (2017), was co-produced with Ben Tanner at Single Lock Records studio, in Florence, Alabama.  “Ben's a tech wiz, but he's also a really interesting, thoughtful person” says Garner.  “It's hard to find someone who's creative with the knobs. He's the keyboard player for the Alabama Shakes. I met him when I was touring with Johnny Fritz and we were opening for the Shakes. We became friends and had good chemistry in the studio right away.”

With an ace band that includes drummer Dom Billett, bassist Jerry Bernhardt and The Kernal's longtime guitarist Cotton Clifton, the pair worked in classic analog style, capturing performances. “We did as much to tape as possible,” Garner says. “Very much in the tradition of the stuff we were listening to. When you record to tape, it makes you think less about the particular mistakes that you might make. There were times we were on the second take, and something just felt really good. Then a couple of the guys piped up, 'Well, I messed up this or that.' And I said, 'Nope,' because I could tell that that performance was what we needed. If you're only working in digital, you can fix everything, and it's easy to ruin the feeling if you start making everything perfect.  I believe if I have that kind of good feeling during a take, a listener will have a similar kind of feeling.”

While Garner has also toured steadily over the last decade as a sideman for such artists as Andrew Combs, Caitlin Rose, Johnny Fritz and Erin Rae, it's his solo project as The Kernal that remains his top priority.

As he ventures out onto the road again in advance of Listen to the Blood's release, Garner is retiring the red polyester suit. Actually, it's more formal than that. He says, “The idea has been that by this album I'd be done with the suit and it would be buried in an Iowa cornfield. I know what sounds silly, but my mother is from Iowa and I plan to make the trip later this year to bury it in her hometown as a kind of representational gesture that marks the end of my relationship with these past matters.”

While The Kernal trilogy has helped him deal with family loose ends, it's also reaffirmed his belief in the idea of an artist as an entertainer. “When people ask me what kind of music I play, I say, 'It's like sixteen-foot trailer country music,'” he says. “You pull up a hay trailer in a field and you barbecue a bunch of stuff and there are people setting off fireworks and there are kids running around in diapers with ice cream running down their bellies. You get up there, turn it up and have a good time.  I just love seeing people have a good time, and I think that's why I like country music. The groove of it. It speaks to people's legs. They loosen up and enjoy themselves and it's no big deal. I love that. And I love to be able to contribute to that.”