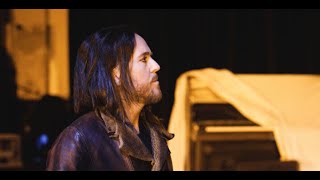 The Absence Of You by Tim Minchin (Official Video) 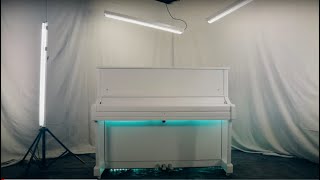 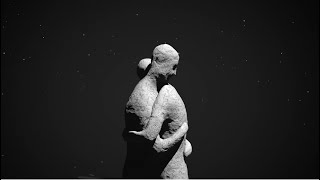 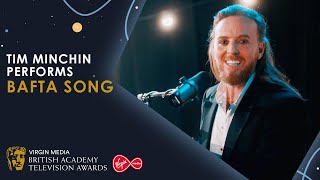 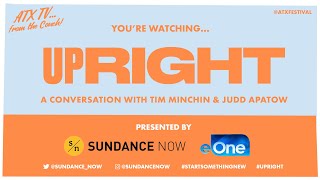 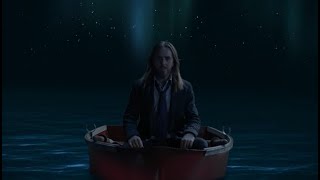 “For the past twenty years, I’ve always written from a point of view. It could be a pseudo-classical song about putting your baby to bed. Or an Austrian drinking song about the Catholic church. Or from the perspective of a six year-old child who’s a genius. That’s great. But this isn’t that. This is about what fills the available space when you pause for a moment.”

It says a lot about Tim Minchin that even when he pauses to take stock, the very opposite seems to happen. In this case, the “opposite” is a brand new studio album, Apart Together which is set for a worldwide release this year. That it’s taken Minchin until now to release his first “proper” album speaks volumes about the twists and turns his career has taken since he made the 14,500 mile journey to London from Perth in the hope of finding an audience for a kohl-eyed, shock-headed musical comedian. Since landing the 2005 Perrier Award for Best Newcomer, the bullet points mark a vertiginous ascent into wider renown: his music for Matilda the Musical, which helped propel the Royal Shakespeare Company’s adaptation of Roald Dahl’s book to a record-breaking total of eleven Tonys and Olivier Awards; a string of sold-out arena tours; his celebrated portrayal of Judas in the 2012 touring version of Jesus Christ Superstar; and a snowballing acting and writing career which dramatically bore fruit in Foxtel’s acclaimed 2019 series Upright.

But, of course, that isn’t the whole story. As a devout rationalist, Tim Minchin will no doubt be aware of Newton’s third law – that for every action, there is an equal and opposite reaction. And so, with the giddy successes, there must be one or two concomitant setbacks. In 2018, four years after Minchin and his family moved to Los Angeles to start work on the animated musical Larrikins, the project – three-quarters and $50 million dollars into completion – abruptly fell victim to Comcast’s acquisition of DreamWorks. All of which needs to be mentioned, because these are all experiences that, along the way, have become fossilised into the creative fuel that powered Apart Together into existence.

And perhaps no more so than the first song to be released from the record. Following a long tradition of ambivalent songs about the City of Angels – think of, say, Rilo Kiley’s Let Me Back In or Albert Hammond’s It Never Rains In Southern California – Leaving L.A. sees our protagonist take one last tour around his adoptive home, in the process reconciling the dreams that brought him here with the reality of the four years that followed: “…the needy and the greedy and the homeless and horny/And the deals done on treadmills at ten to six in the morning/And the Captain’s on the PA saying, ‘Look for the sign!’/But I find it’s just some fucking letters on a hill.” Seeking to complete what he started with the lyrics, Minchin turned to his producer and co-arranger Daniel Denholm to lay on a suitably grandiloquent Hollywood setting. Minchin explains: “It’s a break-up song, essentially. One of those break-up songs where you’re trying to convince yourself you hate that person – but actually, there’s a fondness in it too.”

For an artist whose musical output has often been determined by the brief of a wider project – be it Matilda or Groundhog Day – The Musical – it was tempting to make this album “about” something. But early on in the process, Minchin realised that there’s something to be said for holding your nerve and waiting to see what happens. Almost immediately, the songs came. The first was the album’s opening track Summer Romance, another memorial to a city that changed the course of Minchin’s life. This time, the setting was London. A chorus of almost pyrotechnic grandeur acts as a suitable setting for a lyric which is ultimately about letting go. “It doesn’t have to be London,” he elaborates, “It’s really about a time of your life to which you can never get back. Reluctantly accepting that your future is elsewhere. And yet you might never again be as happy as you are here.”

Following on the heels of that song, came two more standouts: I Can’t Save You and Talked Too Much, Stayed Too Long. The former is a tender address to a character that most of us will meet at some point in our lives – the tormented soul who you would do anything to save, and yet in life, anything isn’t always enough. On the latter, Minchin turns the camera around to deliver the album’s most cathartic performance: a riotous recap of the highs and lows that propelled him to this point. Imagine The Ballad Of John & Yoko with a Basie swing and you’re some of the way there: “Took my eyeliner to Edinburgh in twenty-oh-five/Played to forty-five paying punters on that opening night/But to my surprise there was a rising demand/For a lovechild of Liberace and Edward Scissorhands.”

Clearly, relocating from Los Angeles to Sydney at the beginning of 2018 had left Minchin with much to process. Having written songs in the past in which he elegantly repudiated the cliché of the tortured artist (Dark Side, Rock and Roll Nerd), Minchin found himself wrestling with a new emotion. “Sometimes it’s not enough to remind yourself how privileged you are. And that was weird for me. Because I’m good at reasoning my way into a happier state of mind. When it finally went away, I just woke up and realised, ‘Oh! That was just grief, was it? Phew!’ But that emotion – even though this was never going to be a bunch of whiney songs – that emotion is probably the base paint for this record.”

It’s a point borne out with every turntable mile accrued in the company of Alone Together. Had Minchin’s earliest plans to record a solo album borne fruit, his debut album would have emerged 20 years ago. Desperate to mark out a similar niche to inspirations such as Ben Folds and Rufus Wainwright, the young Minchin moved from his native Perth to Melbourne on the promise of a record deal that never materialised. However, Alone Together bears scant resemblance to that record. And while you can hear those aforementioned inspirations in the mix – most immediately on the ivory-thwacking powerpop of Beautiful Head and Airport Piano – this is unashamedly the work of a husband and a father with his own unique story to tell.

From the author of If I Didn’t Have You (“…well I really think that I would have someone else”), we know not to expect anything that one might term a straightforward love song. And the title track of Alone Together is something of a companion piece to that long-time live favourite. Inspired by a news story on Los Angeles radio station KCRW about an elderly couple in their mobile home who died of hypothermia in each other’s arms, Alone Together tenderly teases out the improbable beauty of such an outcome, and frames it in an exquisitely pensive setting. “From the outset,” he explains, “if you enter marriage wholly accepting that it’s a commitment to watching each other decay, there’s something far more beautiful in that than the greetings card depiction of love that it’s overturning.”

This cards-on-the-table candour spiders out into several more of the record’s most affecting moments. While other songwriters may seek to portray marriage as a force-field that protects you from the temptations of life on the road, Minchin’s songs square up to a more fascinating reality. On I’ll Take Lonely Tonight, he succumbs to a kiss in a moment of weakness from a stranger before the enormity of what’s being put at risk puts any longing for short-term gratification into perspective. Before being blown into the blue by a soaring, show-stopping chorus, the delicate baroque pop beginnings of The Absence Of You see our protagonist in London’s Soho Square on a sunny day, attempting to reconcile this idyllic moment to the one thing that it lacks – the companionship of his wife.

Australians are frequently wont to talk about “the tyranny of distance” and, even listening to Apart Together, it’s easy to see why. With travel come increased opportunities to be alone with your thoughts. And inevitably those thoughts turn to the relationships that define you, both with places and people. It’s a process we saw beautifully portrayed in Minchin’s portrayal of Lucky in the eight episodes of Upright, many of which he wrote, in the process, drawing on relationships in his own life. And it’s also there in the signature song of that series which also closes Alone Together. Eschewing the grand ornamentation of what precedes it, Carry You is perhaps the album’s most affecting moment of emotional disclosure. “If they would let me trade,” he sings, “I’d give a year for half a day/Just curled up on the sofa with you.”

Sometimes, in jettisoning almost all extraneous detail and writing down your own truth, you alight on something universal. It’s tempting to surmise, upon spending time with Apart Together, that it all happened this way – both the highs and the lows – for a reason. But, of course, its creator has no truck with that sort of supernatural talk. “You’d be mistaking cause and effect for destiny,” he smiles, “I’m in 44 now. I’m married and I’m a dad. But more to the point, I’m acutely aware of all the things I’m not. I’ve finally figured that it’s ok to write the songs that I write – they do tell stories and often they are very theatrical. And that’s fine.”

It’s more than fine. It’s what we came here for.