Andrea, Matteo And Virginia Bocelli Come Together For Their First Album Together A Family Christmas | Shore Fire Media Andrea, Matteo And Virginia Bocelli Come Together For Their First Album Together A Family Christmas

This holiday season, internationally renowned tenor Andrea Bocelli is teaming up with his 24-year-old son Matteo Bocelli and his 10-year-old daughter Virginia Bocelli for their first-ever album together, A Family Christmas. Set for release on October 21 via Decca / Capitol Records, the recording showcases their multi-generational musical talent in a range of festive favorites.

“We are offering our small, intimate, and heartfelt gift to anyone who wishes to enjoy the soundtrack of Christmas in the Bocelli home,” the family says.

“The Greatest Gift,” the first single, was released today. The original song, written and arranged especially for this album, celebrates peace and love at Christmas time. Andrea, Matteo and Virginiasing in growing harmony, while the music swells towards a rousing final chorus with a string orchestra and choir accompaniment. Listen HERE. Watch for the lyric video to premiere on Saturday, September 10. Fans who pre-order the digital edition of A Family Christmas will instantly receive “The Greatest Gift.” See below for the full album track listing.

Andrea Bocelli will be joined by Matteo and Virginia on his U.S. tour, which will kick off on December 1 at Chase Center in San Francisco. The run includes shows in such major cities as Las Vegas, Boston, Miami and Columbus with the support of the Columbus Symphony Orchestra. Andrea will perform for the first time ever in Bridgeport, CT, Savannah, GA, Indianapolis, IN with the Indianapolis Symphony Orchestra and at the new venue UBS Arena on Long Island. He will return to the legendary Madison Square Garden in New York City on December 14. See below for itinerary. Tickets are on sale now at https://www.andreabocelli.com/tickets.

A Family Christmas was produced by composer and multi-GRAMMY® and Academy Award® nominee Stephan Moccio (Celine Dion, The Weeknd, Miley Cyrus, Barbra Streisand), who also contributed new arrangements and co-wrote “The Greatest Gift” alongside Amy Wadge, Jonas Myrin and Andrea Bocelli. The album captures the Bocelli festive spirit in full flow, with new renditions of traditional carols arranged for all three voices, including “Away in a Manger” and “Joy To The World” plus popular Christmas tunes from around the globe such as “Feliz Navidad” and the new original song “Il Giorno Piu Speciale,” which was written by Federica Abbate, Cheope, Katoo and Andrea Bocelli. The trio of complementary voices intertwine and echo on the album’s stirring opening track “Do You Hear What I Hear?”

Each Bocelli gets a chance to shine on A Family Christmas with solo tracks, duets and trios. For 10-year-old Virginia Bocelli, this marks her first appearance on an album, having previously joined her father for a spine-tingling performance of “Hallelujah” during 2020’s hugely popular Believe in Christmas concert, livestreamed from the Teatro Regio di Pama (watch here). She provides the tender openings to “Away in a Manger” and “Over The Rainbow” and performs solo on “When Christmas Comes to Town.”

At 24, Matteo Bocelli has launched his own successful solo recording career after signing to Capitol Records in 2019. He shot to fame in 2018 after duetting with his father on the hit song “Fall On Me” from Andrea’s best-selling album, Sì, which debuted at No. 1 on the U.S. and U.K. charts. The emotive video, which features images of father and son through the years, has now surpassed 100 million views (watch here). Matteo and Andrea reunite on “Have Yourself a Merry Little Christmas”and Matteo duets with Virginia on “Happy Xmas (War is Over)” before taking a solo turn on “I’ll Be Home For Christmas,” which closes the album.

For Andrea Bocelli, the most celebrated classical singer in modern history, the chance to work with Matteo and Virginia on this album has been a source of great joy. He says, “I think there is nothing more beautiful than making music with your kids; I consider it a privilege.” As well as performing with his son and daughter on many of the Christmas songs, Andrea takes the lead on “The First Noël” and “Buon Natale.”

Andrea’s emotive and instantly recognisable voice has earned him millions of fans around the world. In April 2020, he broke records with his emotionally charged Music for Hope performance from the historic Duomo cathedral in Milan. His unforgettable Easter performance ranks among the biggest musical livestreams of all-time and the largest simultaneous audience for a classical livestream in YouTube history. He has earned a Golden Globe, seven Classical BRITs, seven World Music Awards and a star on the Hollywood Walk of Fame.

Reflecting on A Family Christmas, Matteo concludes, “Singing these songs together, feeling the holiday warmth with my family is something really special. That’s what Christmas is about – making memories together to cherish forever. It’s really exciting to think that people will have a copy of our album sitting wrapped under the tree.”

5. Have Yourself a Merry Little Christmas

10. When Christmas Comes to Town

13. I’ll Be Home For Christmas 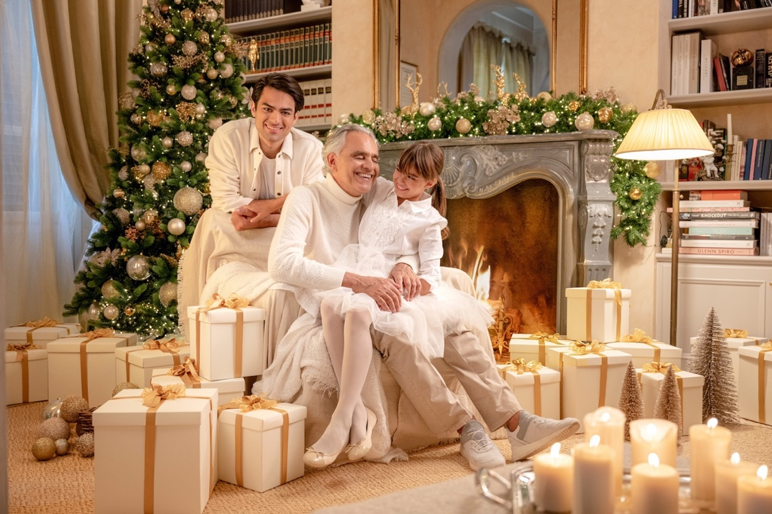 About the Andrea Bocelli Foundation

The Andrea Bocelli Foundation (ABF) was established in July 2011 by Bocelli family after being inspired by the affection and positivity received from fans and partners around the world. ABF has since grown into an independent non-profit led by world-class professionals that oversee the strategic development of key projects. The Foundation’s core mission is to empower people and communities in situations of poverty, illiteracy, distress due to illness and social exclusion by promoting and supporting national and international projects that promote the overcoming of these barriers and the expression of their full potential.

Since 2011, ABF has raised approximately 46 million Euros in fundraising efforts resulting in the construction of 9 schools in Italy and Haiti that offer daily access to a world-class education to over 3,500 students. Additionally, ABF has created welfare projects that guarantee access to clean water and basic medical treatment to over 400,000 people living in the most remote and impoverished areas of Haiti. The Foundation also implements and promotes education projects that leverages music as an additional tool for social inclusion and talent development, all in line with the United Nations’ 2030 Agenda Goal Number 4.7.