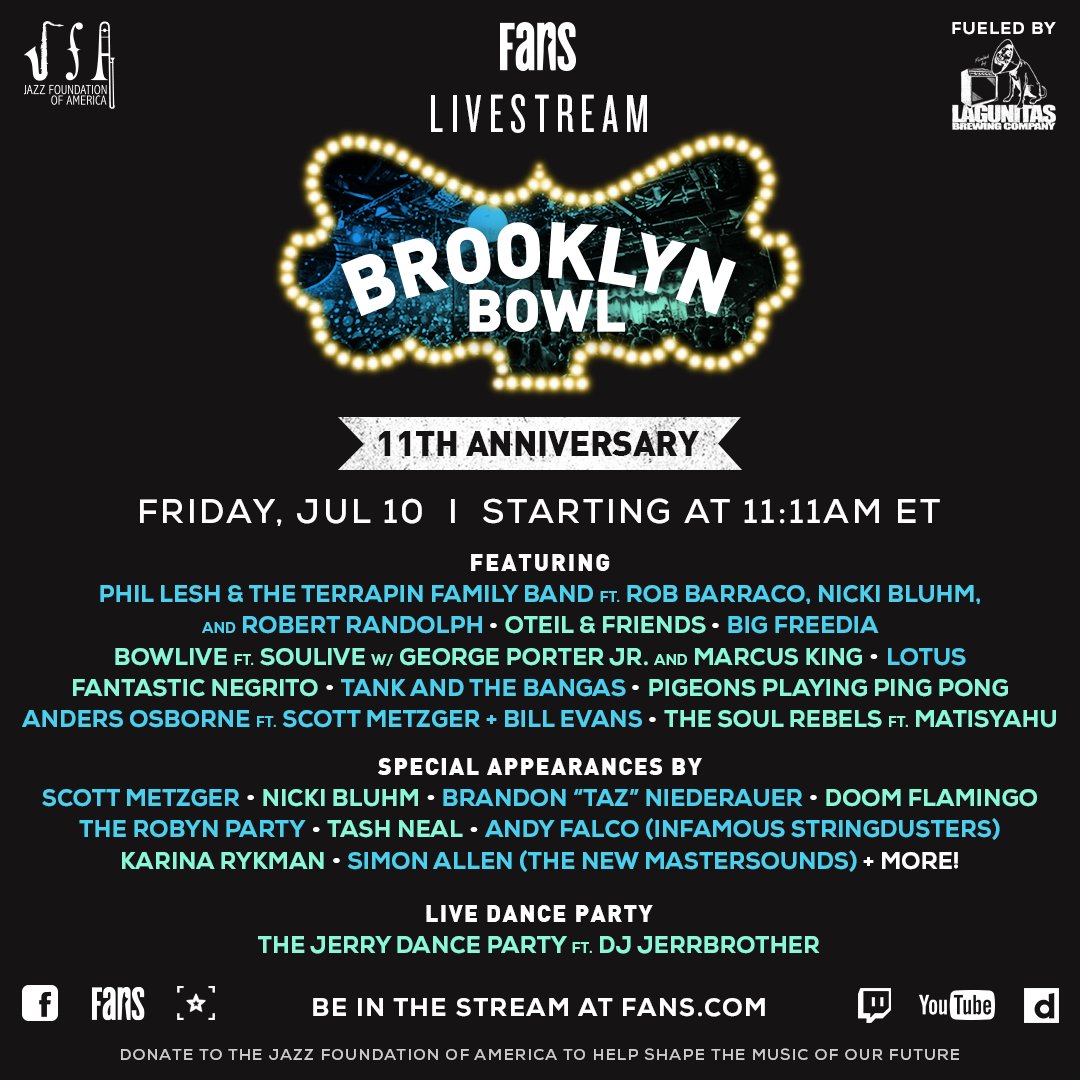 “We started Brooklyn Bowl to bring people together to enjoy the magic of live music. We had a great run, open every night of the week, with people coming from every direction and we loved hosting every type of musician and fan that you can imagine. And then we had to stop. Even though our stage is dark we are still turning 11 years old, and having a birthday during this difficult time makes us want to get back to doing what we do more than ever. We will be back.”

"We have had a lot of fun in our first 11 years! Because we’re closed temporarily, we now exist as a glowing sense memory of warm vibes, soft light, great sights and sounds, a place that became a refuge from the ordinary crap in modern life...a place where we rediscovered the simple magic of coming together to celebrate life. This anniversary comes at a moment of enormous pain, stress and loss for so many of us. But it’s also an opportunity, a giant Reset Button. All of us can practice greater kindness, mindfulness, and generosity of spirit. We all need to love each other and pull together. We will be back!"

"We are incredibly proud of all that we’ve accomplished in the last 11 years here at the Bowl, but the thing we’re most proud of is the community that we’ve built. We’re all desperately looking forward to being together again, once we can do that in a way that is safe for everyone—both in our community and outside of it. Once that’s possible, we can get back to making more magic with our Brooklyn Bowl family."

This stream will raise funds for The Jazz Foundation of America, a non-profit organization based out of New York City who's mission embodies everything Brooklyn Bowl stands for within the music community. By supporting the JFA, you'll assist them in helping jazz and blues musicians in need of emergency funds during times of crisis across the country which directly benefits the music of our future.

This stream will also offer FANS’ the opportunity to Be In The Stream, allowing viewers to be showcased from the comfort of their homes, reliving their favorite music memories or experiencing them for the first time. Get on the guestlist today on FANS.com

About FANS: Building on the success of The Relix Channel, independent music impresario, Peter Shapiro, has reinvigorated FANS.com. While growing the company’s broadcast offerings, Shapiro and FANS have developed an immersive, livestreaming platform changing the way music is created, shared and experienced, no matter where it finds you. FANS enables advanced communication within livestreams so users can do more than view including being in the stream alongside viewers around the globe. With a commitment to keeping live music enthusiasts connected during these unprecedented times, the site will stream live concerts and archival video content from The Capitol Theatre, Brooklyn Bowl Williamsburg and Las Vegas, Garcia’s, LOCKN’ festival, as well as from fellow venues/festivals.

FANS on the web:

Brooklyn Bowl on the web:

The Jazz Foundation of America on the web: