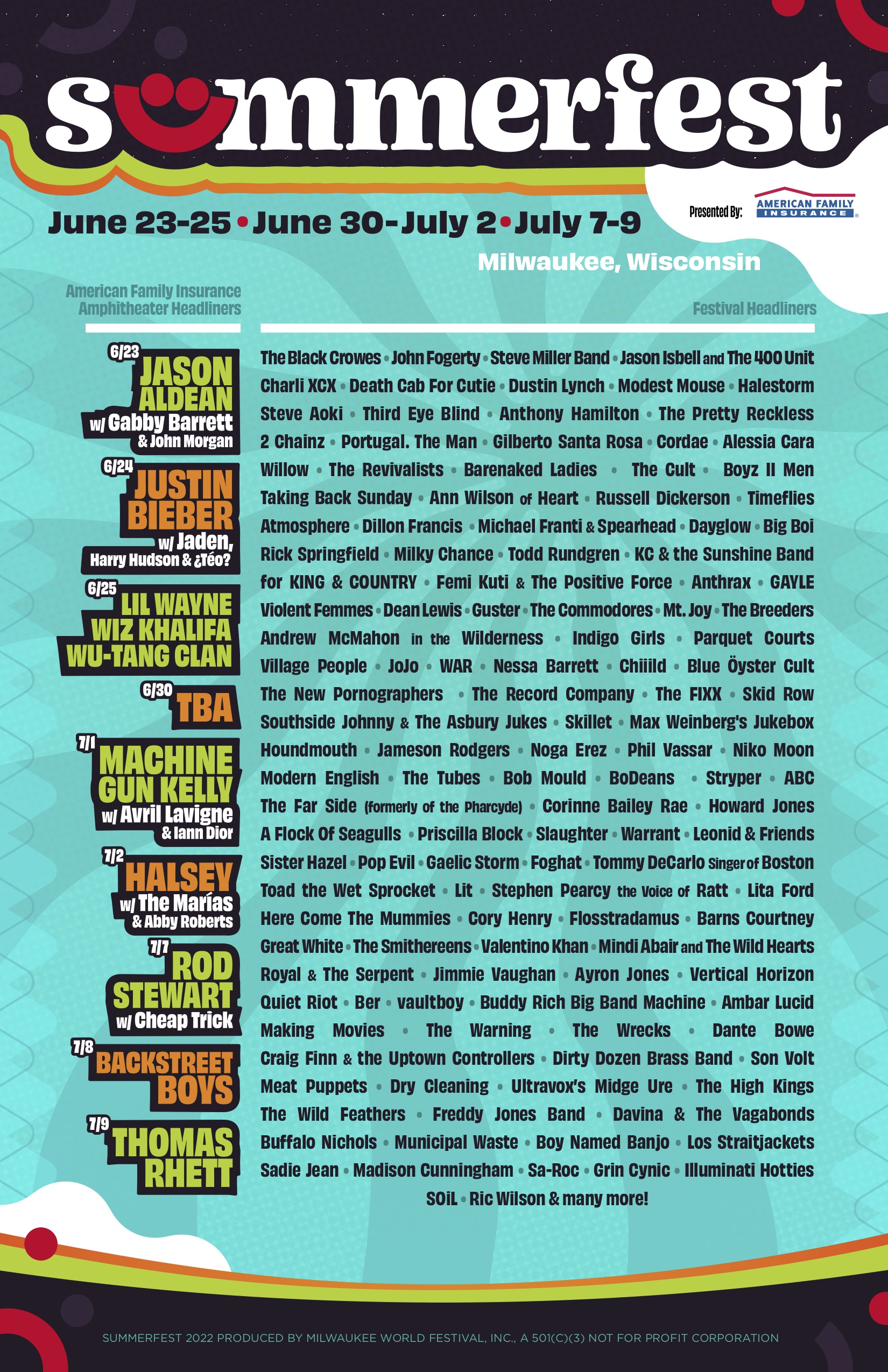 “It feels great to announce our highly anticipated lineup and have the festival back in its regular summer timeframe for 2022,” said Don Smiley, President and CEO of Milwaukee World Festival, Inc. “From Justin Bieber, Halsey, Backstreet Boys, and a special Summerfest co-headlining show with Lil Wayne, Wiz Khalifa, and Wu-Tang Clan, to John Fogerty, Steve Aoki, Halestorm, and others, it would be difficult to find a more diverse lineup anywhere.  Make plans to join us for Summerfest this June, one of the most affordable music festivals in the world, and home to over 1,000 artists performing live over the nine-day run.”

Summerfest will once again offer seating options at the BMO Harris Pavilion with Miller Lite for all evening headlining performances. This policy offers Summerfest fans the choice of free general admission seats or reserved seats available for purchase, for shows beginning at 8:00 p.m. Visit Summerfest.com for on sale dates and times.  Fans can also experience an elevated concert experience at the Level Up Deck located in the Miller Lite Oasis, overlooking the stage. Tickets for Level Up are available now and include admission to Summerfest the day of the show, two complimentary beverages, and access to a private bar, restrooms, and more.

Tickets for Summerfest are ON SALE NOW, take advantage of these limited time offers:

NEW - at the American Family Insurance Amphitheater during Summerfest - Lil Wayne/Wiz Khalifa/Wu-Tang Clan on Saturday, June 25 and Backstreet Boys on Friday, July 8, 2022. Tickets go on sale Friday, April 8 at 10:00 a.m. for Backstreet Boys and Friday, April 15 at 10:00 a.m. for Lil Wayne, Wiz Khalifa, Wu-Tang Clan at Ticketmaster.com or in person at the American Family Insurance Amphitheater Box Office and include admission to Summerfest the day of the concert.

Halsey with The Marias and Abby Roberts

Jason Isbell and the 400 Unit

Andrew McMahon in the Wilderness

The Far Side (formerly of the Pharcyde)

A Flock of Seagulls

Stephen Pearcy the Voice of Ratt

Mindi Abair and The Wild Hearts

Summerfest presented by American Family Insurance has evolved into what is now recognized as “The World’s Largest Music Festival” and Milwaukee’s cornerstone summer celebration, hosting the music industry’s biggest acts, emerging talent, and local favorites along with approximately 750,000 fans, for an unforgettable live music experience. The festival features over 1,000 performances on 12 permanent stages, along with food, beverages, and activities, all in a world-class festival setting. The 2022 edition will take place over three weekends June 23-25, June 30-July 2, and July 7-9. For more information, visit Summerfest.com, or Facebook, Twitter, and Instagram: @Summerfest.