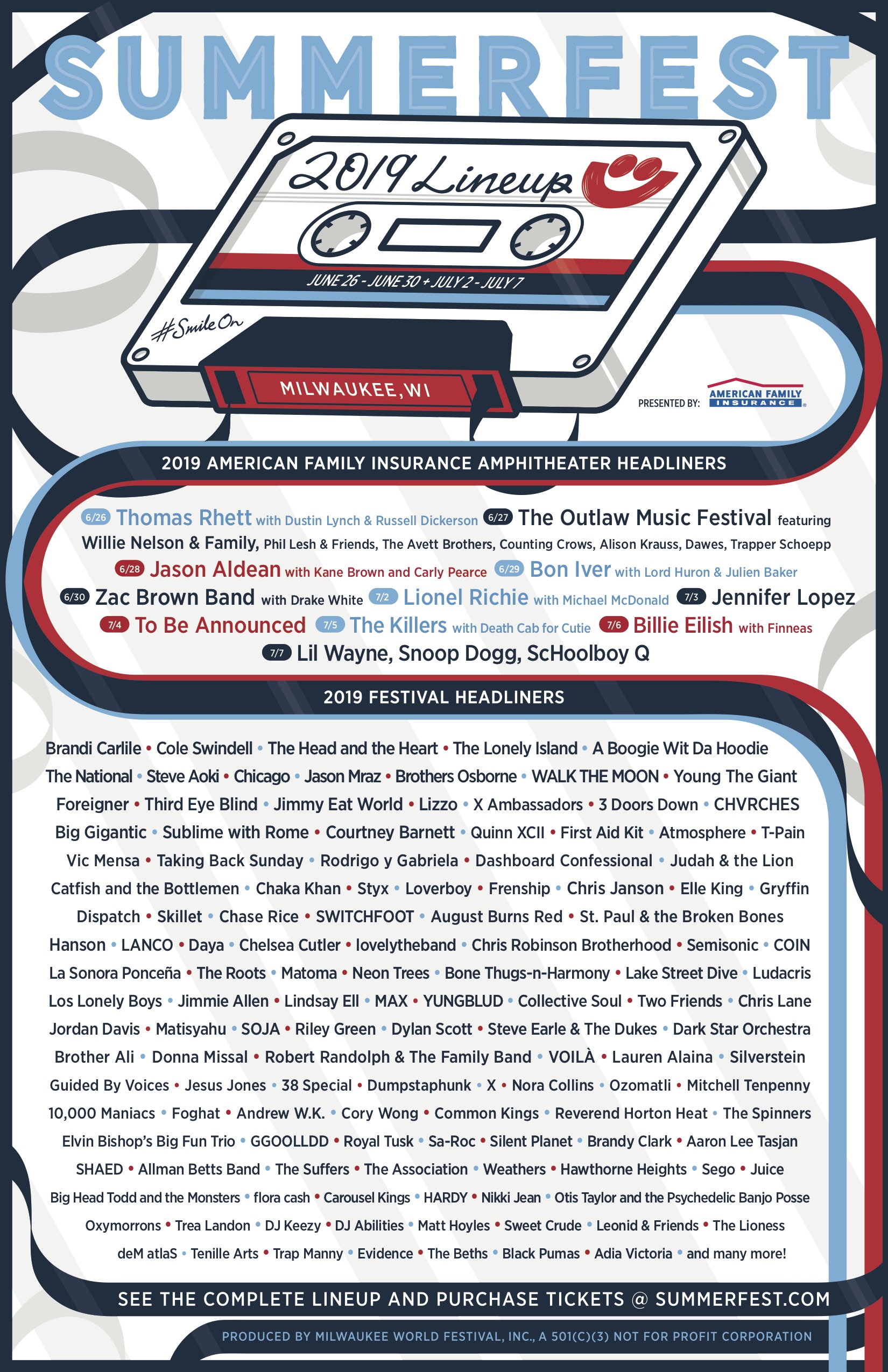 MILWAUKEE, WI (April 9, 2019) – Summerfest presented by American Family Insurance is excited to announce the 2019 headliner lineup. The 52nd edition of the festival, Summerfest 2019 will remain true its roots, offering something for every music fan from pop to hip-hop, country to EDM, and alternative to classic rock.

"For 11 days on 12 stages, Summerfest delivers on its reputation as “The World’s Largest Music Festival,” offering a diverse lineup of artists to our fans on Milwaukee’s lakefront,” said Don Smiley, President and CEO of Milwaukee World Festival, Inc. “The completion of the first phase of the new American Family Insurance Amphitheater will make its debut this year during Summerfest, and, immediately after the festival, work will begin on the second phase of the construction project. The grand opening of the amphitheater will take place in June 2020, at which time $148 million will have been invested in Henry Maier Festival Park in the last 15 years. We are committed to remaining a top destination for music fans worldwide, as well as a driver of $186 million dollars of economic impact for the region,” he added.

Construction during the first phase of the American Family Insurance Amphitheater features improvements to the infrastructure and back-of-house areas, including the raising of a portion of the current roof from 36’ to 65’ feet, which was completed in early February, to accommodate the largest touring productions, in addition to the following: a removable stage and flat floor seating in front of the stage, 19 state-of-the-art dressing rooms, new production spaces, dining/catering facilities, nine loading docks, and six new high-definition LED walls throughout the venue.

Summerfest 2019 headliners on the festival stages include:

St. Paul and the Broken Bones

Big Head Todd and the Monsters

The Head and the Heart

Dates, times and stage locations as well as additional headliners will be announced in the coming weeks.

Ticket prices for Summerfest are as follows:

About Summerfest presented by American Family Insurance
Following its 1968 debut, Summerfest presented by American Family Insurance has evolved into what is now recognized as “The World’s Largest Music Festival” and Milwaukee’s cornerstone summer celebration, hosting the music industry’s hottest stars, emerging talent and local favorites along with approximately 800,000 people from Milwaukee and around the world each year for an unforgettable live music experience. During the festival, the spotlight shines on over 800 acts, over 1,000 performances, 12 stages, delectable food and beverages and interactive activities, all in a world-class festival setting. Summerfest 2019 takes place June 26-June 30 and July 2-7, 2019, closed on July 1. For more details, visit Summerfest.com, Facebook.com/summerfest or Twitter: @Summerfest.