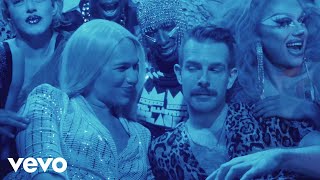 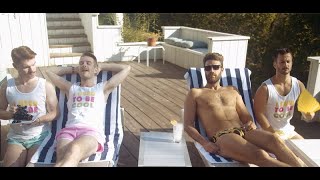 In Summer 2018, Rod Thomas attended a rehearsed workshop of Nile Rodgers’ history of disco musical, We Are Here at a New York theatre. Rod is Bright Light Bright Light, the sleek one-man band - frontperson and electronic musician master - whose fanatic instinct for premium pop culture has informed each of the four stealthily sophisticating records he’s fashioned.

During the musical, he misheard a quote attributed to Mayor John Lindsay, New York’s governor during covering the 1968 Stonewall Riots. It sent him down a historical research rabbit-hole. ‘On his first day of office in ’66, everything shut down and New York went to shit,’ recounts Rod. The similarity to the climate he drops the new Bright Light Bright Light record into, though entirely accidental, is not lost on him. ‘All the lights went out, so somebody jokingly said to him, “you’re still happy to be mayor of New York?” And he replied, “I still think it’s a fun city.”’

The words Fun City hit Rod hard. An idea began to germinate, congregating the songs he’d been writing. His new material felt like it carried a wider purpose than just the dizzy highs of a solid gold pop fix. ‘I wanted to make a record about the community that I am a part of,’ he says. He realised he was composing a suite of music honouring the light, nodding to the dark of the LGBTQ+ experience. ‘Throughout the decades,’ he notes, ‘gay people have really had to make the most of their situation, in spite of the social, political and economic hardships of being “other.”’

In a moment of potent political turmoil, in a new New York under the tenure of a president with a speciality for throwing minorities under the nearest bus, you can see why the idea appealed. ‘I needed to find those moments of neon, gold and colour in this dark landscape.’ To make pop with purpose. ‘Fun City is a love letter to how diverse and inspirational those people are. Its aim is to help the community support the community.’ By assembling a spectacular array of guest slots to complement his central role, Rod put his money where his mouth is.

Rod Thomas moved from London to New York seven years ago. The surface has changed, but in the corners he primarily occupies, queer immigrant history still tingles through the woodwork. Rod has become embedded in the city’s outlier creative factions, as resident weekly DJ at Alan Cumming’s outré queer cabaret and dancing experience, Club Cumming. He throws a regular once a month Friday party at the Brooklyn bolthole, C’mon Everbody. In his NYC years, he has turned from smalltown Welsh valleys boy into a vital connecting tissue between queer tribes. Sometimes it really is as easy as simply caring about these things.

Mayor Lindsay’s offhand quote prompted Rod to look into the history of where it all came from. To immerse himself in old literature and film, searching online for an origins story of LGBTQ+ New York, at which to counterpoint the present moment, a melding of queers past, present. Steeped in his Sylvester records, emboldened by Sylvia Riviera’s inspirational, angry missives, his work feels reanimated with new momentum. ‘I just wanted to look outside of myself,’ he says.

Fun City is a record whose process is the product. Its primary concern is to engage LGBTQ+ communities into owning their own story, at each intersectional angle. It arrives courtesy of his YSKWN! family, an initiative of Rod’s instigation to nurture queer artists, to help lift one another up. To pass on the love. The wider remit is about making sure our story is written down, to add to those cogs in the wheel towards the LGBTQ+ story becoming a definitive tract.

‘It’s about owning your voice,’ he says, ‘just making sure people are aware of different artists and the excellent work they’re doing across the world. Some people that are hilarious. Some that are serious. People that are fundraising or making music or drawing or making film. It’s a way to give people a little prop up, in whatever way we can.’

These are pressing concerns in a turbulent world, shifting on a precarious digital axis. ‘Online is a super vacuous world,’ says Rod. The connections feel stilted, unreal, excarnated. ‘You have gay influencers posting shirtless selfies, saying ‘I’m bored, how was your weekend?’ Cool, you know. At least you’re not dead or working on the construction site opposite my house like people who can’t afford to eat this week.’ The wider parameters inflamed Rod’s songwriting process, taking him on new tangents. ‘Having more of an awareness of who you are, what you’ve come from and where you should go to next. History is important. The future is important. One doesn’t exist without the other. I feel like that really is what the record is about.’

Bright Light Bright Light’s Fun City is a pop-prolific musical map nodding to disco, electronica, boogie, balladry and even musical theatre. Opener Touchy, a duet with Australian queer auteur Brandon MacLean, Rod imagines is ‘like being in the Moulin Rouge when a troupe of drag kings come out wearing feather boas and top hats.’ The record shimmies further into the twilight, tagging a compendium guestlist of artists spelling out the past and future of the LGBTQ+ experience. It is a record about honouring our responsibility to one another in sketchy, antagonistic times.

Rod stretched his open arms wide for the record. New York’s alt.cabaret institution, Justin Vivian Bond bends the closing ballad, Saying Goodbye is Exhausting, into a twisted overture, part Noel Coward, part Pet Shop Boys. It was written after Rod heard, broken-hearted about a friend’s suicide and had to pull the tourbus aside, ‘You do realise this community can embrace a lot of people in its arms, but not everybody.’

Erasure’s Andy Bell swings by to lend a mannered, dilletante cameo to Good At Goodbye, a song that plays out like a lost high NRG classic from Liza Minelli Results sessions. Former Scissor Sister, Jake Shears appears on Sensation, a horn-charged homage to the early ‘00s dance anthems Rod first experienced, arms aloft as a kid at local Welsh funfairs. The renewed confidence on community engagement has given the record a fleet-footed, gorgeous, happy sadness, as if smudging a bruise with glitter.

By the time rapper, Big Dipper has lent his Bear swag to Love Song and sometime C’mon Everybody doorman Manchild Black of The Illustrious Blacks has bolstered These Dreams, the broad scope Rod deployed in unearthing everything truly fun in Fun City becomes fully apparent. ‘They’re bold, outrageously faggy and the best of us,’ he notes. ‘This record was a massive lesson in opening my eyes.’

The lyric for first single This Was My House, an effortlessly crafted homage to the work of NYC 80s production giant Shep Pettibone, was written after a conversation with a friend whose parents had voted for Trump. ‘On the way home I wrote the whole lyric of the song about this divide in the family. It ties to the feeling that you absolutely should have the right to feel safe wherever you choose to call home. We don’t have a futuristic nirvana anymore. This is why I wanted this album to be a unifying record, not one of pointing fingers.’

It helps that the song resolutely slaps. Built from an instrumental crafted by disco and hi NRG scholar Initial Talk, it allows Rod to fulfil a whole In Bed With Madonna fantasy, as his vocal is framed by the instantly identifiable BVs of her Madgesty’s former sidekicks, Niki Haris and Donna Delory. ‘They really were so sweet, just the best sports,’ he says.

Last year, Bright Light Bright Light experimented with a new performance technique, eschewing the old 20th century idea of having a band, replacing them with queer dancers, taking up space, as he opened up for Cher’s global tour. ‘Of course, it was amazing,’ he says, ‘and of course it was the gayest thing I’ve ever done, which is quite a fete really.’ One night in Cologne, the entire purpose of Fun City crystalized in his mind. ‘It was a particularly wild crowd and I got a bit lost in emotion one song,’ he recalls. ‘I said “as you can see, we’re really gay.”’

If you can’t say that to an arena full of Cher fans then where, quite frankly can you? ‘The room went fucking crazy. People started messaging afterwards, saying how important it was to say that. Just in terms of visibility. It was amazing to think that accidentally I’d done something useful. That was the gamechanger for me. It matters. People say, “oh, don’t be political.” But you can’t live without being political. If I can’t make an album about the community that I’m actually a part of, then what is the point?’