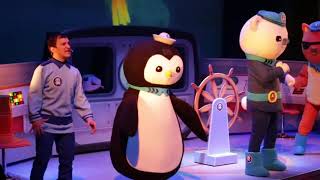 Since the start of his career, Jonathan Shank has thrived on going above and beyond to support artists in fully realizing their vision. With the recent launch of Terrapin Station Entertainment, the Los Angeles-based CEO has created an artist management and production company uniquely placed at the intersection of talent development and community enrichment, while continuing to expand his reach as an industry leader in live family entertainment.

With a dynamic background that includes working with an incredibly eclectic range of artists— Isaac Hayes, Smashing Pumpkins, Eve, Paul Oakenfold, Aly & AJ, Ashley Tisdale, and LFO, to name just a few—Shank first began pursuing his intense love of music as a teenager. Originally from Pennsylvania, he attended Tulane University for the purpose of embedding himself in the rich musical landscape of New Orleans, and promptly scored his first internship by turning up on the doorstep of the then-newly-opened House of Blues. During his time at Tulane, he also interned for legendary producer Kim Fowley, who later sent Shank off to L.A. with a stack of business cards scrawled with the words “Hire This Guy.” After graduating, Shank got his start at a boutique agency in L.A., an assistant gig that quickly led to working with legacy acts like The Doors’ Robby Krieger and John Densmore. Thanks in part to his vast musical knowledge, Shank discovered a rare ability to connect with clients on a deep-seated level, a factor that paved the way for his longtime relationship with Grateful Dead drummer Mickey Hart. Not long after taking the role of Hart’s manager, Shank began producing benefit shows for the Rex Foundation, a nonprofit founded by the Grateful Dead and friends. As he mastered the many intricacies of event production, Shank went on to produce such events as Nancy Pelosi’s inauguration bash in 2007 and the history-making Deadheads for Obama fundraiser in 2008. As part of his extensive work with Hart, he also earned a Grammy Award in 2009 for his role in creating the groundbreaking album Global Drum Project.

In 2010 Shank joined Red Light Management, where he soon took charge of developing the company’s family entertainment division. A previously untapped market, the division proved to be a massive success, with productions like Disney Junior Dance Party On Tour, Peppa Pig Live!, and The Fresh Beat Band Live In Concert drawing instant sellouts across the country, generating over $80 million in gross box office sales and garnering three Pollstar Award nominations in 2019 and 2020. In his tenure as senior management executive at Red Light, Shank also played a vital part in cultivating the career of Nickelodeon star Victoria Justice, now a multi-award-winning singer/actor.

Now scaling into other cultural verticals, Terrapin Station is also focused on an endeavor close to Shank’s heart: the production of high-profile charity concerts. Named the 2020 recipient of the T.J. Martell Trailblazer Award (an honor bestowed by the T.J. Martell Foundation, an organization dedicated to cancer research), Shank has produced and directed such events as The Homeward Bound Concert (a fundraiser for L.A.’s unhoused population) and A Tribute to the Music of Linda Ronstadt (a benefit for The Michael J. Fox Foundation for Parkinson’s Research). Not only a means of providing essential resources to those in need, each charity concert helps to fulfill one of Shank’s greatest missions: uniting artists across all genres and eras, and building a mutually supportive sense of community within the music world. Shank lives in L.A. with his wife and two sons.