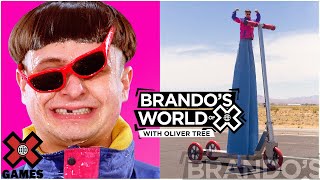 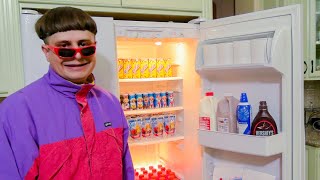 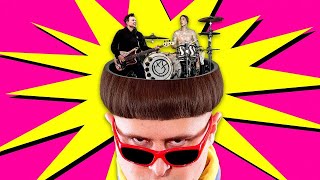 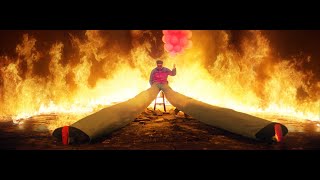 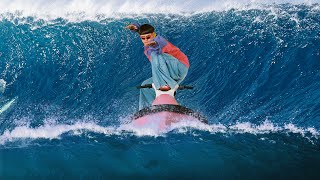 Oliver Tree knows that, on some level, he’s out of his mind. If you called up your friend and breathlessly explained that you’d had a vision of yourself traveling to Ukraine in order to jump off a 12-story building in oversized clothing, what would your friend think except that, unfortunately, you’d lost your mind? If you told that same friend you couldn’t stop thinking about being crucified on the world’s biggest scooter, what else could they conclude?

But it’s also true that Oliver Tree must be a kind of visionary genius, because those things he described—the leap, the crucifixion, and much more—he’s made each improbable idea come true. You can pick your own metaphor when it comes to describing these accomplishments—Oliver Tree as mad scientist, Oliver Tree is grandiose troll, Oliver Tree as demented architect. Oliver himself likens the experience to driving a roller coaster, taking his millions of followers on an unpredictable ride through a cracked world full of comic disaster, tanks, and scooters—always scooters. When you’re on a roller coaster, it’s easy to forget that anyone is in control—that someone in a knit polo and khaki shorts is minding the speed and the brakes. From the front seat, a roller coaster feels subject only to the laws of gravity. Just like when you watch Oliver Tree’s videos or engage with his Instagram or see his live performances, when you hear his distinctive voice barking over guitars and drums, you have to wonder: what’s happening? Who’s doing this? Who’s in control?

Here’s a story: A kid grows up in a mid-size California beach town and at a young age his parents put him in front of a piano. Force him into learning music before he can make the choice for himself. “Mary Had a Little Lamb,” et cetera. He cycles through another instrument, baritone in the school band, to the same effect, reinforcing this idea that music is out of the kid’s control. Then he picks up a guitar during a random trip to a music store. Every single penny he’s saved up until that point in his life goes to buying that guitar. With the guitar’s built-in amp, he’s able to make more noise than anything he’s been capable of before, ugly and beautiful noise.

He falls in love with the operatic excess of rock acts like David Bowie, is especially hypnotized by the visual accompaniment. But this music is old. It’s not hot now and it’s not what his peers are doing. He feels alone, marooned in the wrong era. He finds community and purpose competing in freestyle scooter contests—until a crash changes his trajectory forever. (He’ll later immortalize that moment in the song “Divine Intervention.”)

In middle school he joins a band and starts a rap group. He fills his mind with a heavy dose of psychedelics, which is a whole other chapter. The visuals bend his consciousness. On one particularly intense trip, he hears bass music for the first time and a door opens somewhere deep in his brain.

Meanwhile he’s been having these nightmares about stage fright. Performance anxiety. He’s played music with classmates, middle school shows. Something bigger is calling him now but it scares him. The scale of a screaming crowd in a packed venue.

Eventually he opens for major electronic artists, playing to thousands even though he’s still in high school, and the nightmare changes. Now he seems himself at age 30, playing to a stadium full of people, and he doesn’t feel afraid.

Then he encounters his first record label and by entering into the music business learns how easily an artist can be pigeon-holed and boxed in. This is how commerce works. Creativity is tagged and sold. Experimentation that disregards the boundaries of genre is curtailed. He leaves his first record deal—no small feat. In the hallways of Atlantic Records in New York he rides his scooter around the office, crashes it. Bleeding from the mouth with the help of a fake-blood capsule, he pranks the CEO into hearing his vision. Oliver Tree is a new kind of pop star. Unbridled creative energy in the guise of a person. The roller coaster is pulling out of the station and everyone onboard has their hands in the air, relinquishing control to the ride.

On July 17 Oliver Tree will release his long awaited debut album, Ugly Is Beautiful. “The truth is, it’s my life’s work,” Oliver says. The truth might be slippery but he’s not kidding here. There isn’t a piece of the project he hasn’t touched. There isn’t a feat that’s proved insurmountable. (For instance, he spent months learning to drive a monster truck at the Perris Auto Speedway just so he could drive it in the video for “All That x Alien Boy.”). Oliver’s ambition and understanding of the many permutations of pop shine on early singles “Cash Machine” and “Let Me Down.” The latter in particular is a guitar-driven anthem with a hook that embeds in your brain and lyrics that remain tantalizingly open to interpretation. “Somehow I've seen you're someone else,” Oliver belts in one of its most evocative lines.

Ugly Is Beautiful is the product of all of Oliver’s experiences distilled into fourteen songs, the promise of his EPs, Alien Boy and Do You Feel Me?, fulfilled.

Whether he’s singing over fuzzy pop-punk guitars and bright hand-claps, or rapping on a beat that recalls early ‘90s boom-bap, Oliver’s music finds its emotional resonance in the age-old reality that, as he puts it, “the human experience is a lonely one.” His music mines the loneliness and power in nostalgia. The ride was always leading to this.