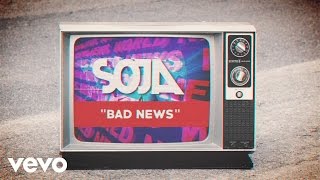 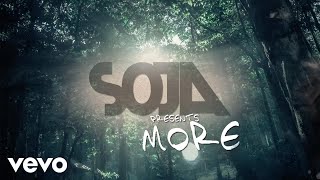 Nearly two decades ago, SOJA began as high school friends in a D.C. area basement teaching each other to be musicians and play roots reggae music. Today, the 2x GRAMMY-nominated band, with over 7 million online followers and over 300 million Youtube views, headlines concerts all over the world for their massive dedicated fanbase. Even with this passing of time and yearly advances in the band's success, SOJA always wants to remember their time together in that basement where they initially connected, inspired by each other’s contributions and ideas. The feeling of true magic, collaboration and brotherhood that started in the basement is still evident today in their music and on full display each night at their live concerts. For their latest studio album, Poetry In Motion (Oct 2017), it was essential to SOJA to consciously go back to the beginning and recapture that same sincere, cooperative magic sparked 20 years ago.

“For your whole life money is the thing you’re scarce on,” frontman Jacob Hemphill says. “Then once you get busy enough time becomes the thing you’re most scarce on. So spending time at home becomes your most valuable commodity and bands start emailing in their parts for the record. We started doing that on the last album. This time we said, ‘What if we wrote, arranged, recorded and produced the entire thing together?’ All eight guys in one room to create something special. That was the approach to this record – to make something we truly love.”

The band decamped to Haunted Hollow Studios, Dave Matthews Band’s studio, in Charlottesville, VA. The idea was to live and work together in one place, investing all their energy into the process. They spent 3 months in the studio over several sessions in late 2016 and early 2017, working and spending hours sitting on the back porch discussing music and life. Everyone showed up with new ideas, new instruments and new gear, and no guest vocalists were invited into the process. The band enlisted Rob Evans, Ivan Guitierrez and Mariano Aponte to co-produce the songs, and there was an open-minded sentiment throughout. “It was a learning and experimenting process,” Jacobs notes. “We got the exact thing we wanted from it.”

The album’s 11 tracks embrace reggae completely, focusing on what the genre can do best. The musicians looked at their 2009 album Born In Babylon as a reference point to remind them of where they came from and how they’d like to go forward.

“The biggest thing about this record is that we agreed that we’re a reggae band,” Jacob says. “We wanted to go back to the idea that we make roots reggae and we do it together. It’s supposed to sound beautiful and sad. I like Born In Babylon better than all my other records and it was made ten years ago. There’s something priceless about the chemistry between a group of brothers. So this is a new chapter, but it’s the same chapter we started on.”

Poetry In Motion continues the band’s belief that music should speak for people and uplift them. The album looks at the world today and asks why it feels like something is wrong when everything is so beautiful. “Fire In the Sky,” propulsive and upbeat, takes the positive outlook on humanity while “Life Support,” a more introspective number, takes the negative. All the other tracks fall somewhere in the middle, as Jacob and the band grapple with the human condition, unafraid of big topics and essential life queries.

“The definition of the title is three-fold,” Jacob says. “I’m poetry, the band’s motion. The human race and the animals and plants that are spinning around on this Earth are beautiful – it’s poetry flying through the universe in motion. And then, thirdly, we are this beautiful poetry but we keep moving away from it. Right now it feels like we’re moving in the wrong direction and it’s scary.”

The album poses questions but never takes on a definitive reply. SOJA isn’t offering an answer. Instead, the answers are out there for each listener to find their own individuality with the band’s help. “There’s no periods on anything,” Jacob notes. “I give hints and glimpses, but my own opinions on the human condition change every year. Sometimes I’m climbing, sometimes I’m sliding. So maybe I’m not the right guy to be answering questions. But I can ask all these questions that matter and help people. I’m out there fishing for the next person.”

His ultimate goal with each song is simple. “How do I make the human condition come into this song?” he says. “How do I relate to the biggest family of all time? That’s all I’m ever really trying to do.”

SOJA’s energetic, impassioned live performances have a similar effect. Averaging around 120 shows a year for the last decade, SOJA has toured with acts that include Dave Matthews Band, 311 and Incubus, and engaged a massive international fan base of die-hard followers at festivals that include Bonnaroo, Hangout Festival, Wakarusa, Cali Roots, Summerjam Germany, Woodstock Poland, Personal Festival Argentina, Ziget Festival Hungry and many more. Their live shows offer people a chance to look both inward and outward, and feel part of a global community, particularly since SOJA has headlined shows in over 30 countries. The band has earned two GRAMMY nominations and built an online following of 7 million, including 4.5 million Facebook fans. They’ve also received an impressive 300+ million YouTube views. For SOJA, everything is about connection, whether it's with the world around them or within the band. “Nothing worth doing in life can you do by yourself,” Jacob notes. “We’re in this together.”

Poetry In Motion is the beginning of a chapter, but it’s also a return to the past. It’s a revitalization of what made SOJA so special to begin with. It’s about eight guys in one room making reggae music that truly means something.

“We’re going back to our roots and what we do best,” Jacob says. “We’re remembering why we started this band and the magic of what we’ve built. We were lucky enough to create our own family and we picked every brother by hand. This album feels like we’ve had an amazing family reunion. It’s a blueprint for our future.”