The Rock and Roll Playhouse Rock and Roll Playhouse Co-Founder and owner of Brooklyn Bowl and The Capitol Theatre, Peter Shapiro 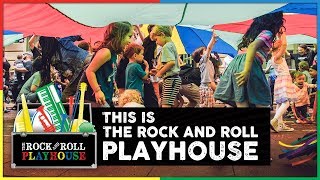 This is The Rock and Roll Playhouse 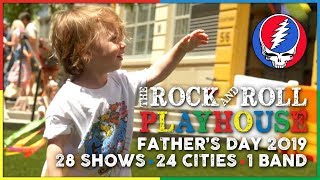 The Rock and Roll Playhouse is a weekly children's-music-concert series that allows kids to “move, play and sing while listening to works from the classic-rock canon” (NY Times). Created by entrepreneur and owner of The Capitol Theatre and co-owner of the Brooklyn Bowl, Peter Shapiro, and Amy Striem, a certified Early Childhood and Elementary teacher, The Rock and Roll Playhouse uses music to educate children and explore their creativity. Founded in 2013 in New York City at its flagship venue, Brooklyn Bowl, the Playhouse has now expanded to seventeen cities — Austin, Asheville, Boston, Boulder, Burlington, Chicago, Los Angeles, Minneapolis, Mill Valley, Nashville, New York, New Jersey, Philadelphia, Portland, San Francisco, South Florida, and Westchester — and eighteen venues.

The idea for The Playhouse came to Shapiro, a parent of two young children, after he discovered first-hand a lack of regular programming in New York City that combined his passion for live music and his family. He collaborated with Striem, then an administrator at his daughter’s nursery school, to help fill this void that they felt many other parents also shared. Using the music of the most iconic musicians in rock history, from The Grateful Dead to Prince to David Bowie to Aretha Franklin to The Beatles and more. The Rock and Roll Playhouse offers its core audience of children under 10 with games, movement, and stories and an opportunity to rock out.

Amy Striem is the Director of Family Programming for Dayglo Ventures and the Founder and Executive Director of The Rock and Roll Playhouse, a rock and roll family concert series hosted in historic music venues across the country.  Striem develops curriculum and curates programming that brings rock-based music to young children and their families in the form of an interactive live concert experience.

Striem partnered with Peter Shapiro in 2011 to create RRPH and launched the first family concert, Music of The Grateful Dead for Kids, in December, 2014 at Brooklyn Bowl featuring Phil Lesh. Striem has successfully expanded the program and has since produced over a thousand family concerts in more than 30 venues across the country, including Gallagher Way at Wrigley Field, Rockefeller Center, and The Metropolitan Museum of Art.

Striem brings to Dayglo Ventures and the music industry a unique background as an experienced educator with more than 15 years as an elementary school teacher, school administrator, and a reading specialist. Striem is a certified NYC teacher and holds a Master’s degree in Early Childhood and Elementary Education from NYU, and a BA in magazine journalism and political science from Syracuse University.

In 2014, Shapiro entered into an exclusive deal with Phil Lesh, by which the Grateful Dead co-founder performed at Shapiro’s venues and events. In July 2015, Shapiro created Fare Thee Well, Celebrating 50 Years of the Grateful Dead. The heralded event took place over five nights at Levi’s Stadium in the San Francisco Bay Area and Soldier Field in Chicago, earning acclaim as “the biggest concert by one band in America. (Rolling Stone)”

Shapiro is the founder of Lockn’, an annual four-day music festival defined by its creative, collaborative programming, which has drawn over 30,000 fans to a farm in rural Arrington, VA. He also created Jazz & Colors, an experiential music event held in such iconic locations as New York City’s Central Park and the Metropolitan Museum of Art, along with Chicago’s Field Museum.

He serves as publisher of Relix Media Group overseeing the iconic print publication Relix Magazine, the highly trafficked music website Jambands.com and digital ad agency, Hear & There. Billboard acknowledged the collective success of his endeavors by naming him to their Power 100 lists of 2015 and 2016.

Some of his other projects include the Jammy Awards, America’s largest Earth Day event and the IMAX concert films U23D and All Access. He also co-founded the retail / online brand, Stone Fox Bride. In 2017, Shapiro oversaw the live steam broadcast of the Women’s March, and served as Executive Producer of the March for Science on Washington’s National Mall.

Shapiro sits on the board of a number of civic and charitable organizations, including: The Rock and Roll Hall of Fame (where he is a voting member), New York Public Radio, New York City Parks’ Arts Committee, Central Park Summerstage, HeadCount and The Lowline. He also co-founded the environmental consulting firm Green Order.